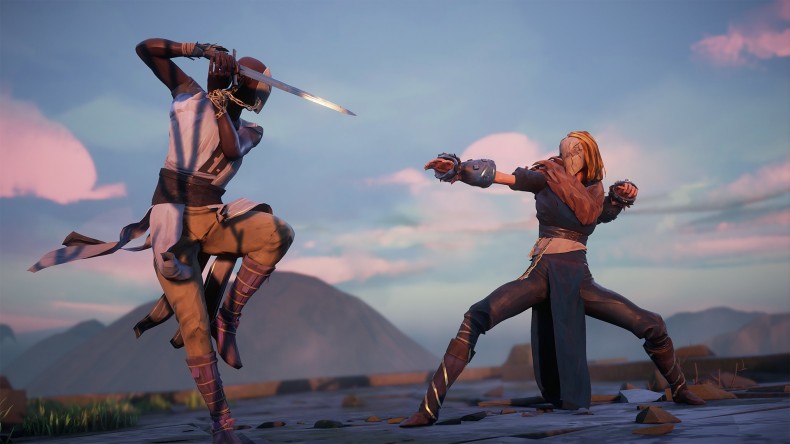 Absolver is an online multiplayer brawler from Paris-based indie studio Sloclap that focuses on fluid fighting mechanics across an array of martial arts styles.

As an online fighter, players travel the world of Adal and challenge both NPC and human players alike, honing their fighting skills, collecting armor, and learning new moves along the way.

Right out of the gate, Absolver offers a variety of classes for players to choose from when building their initial fighter. Regardless of class, each fighter has access to at least four combat styles at any time, including standard kung fu, a staggered style like drunken kung fu, and a more brutal style that allows players to absorb some attacks. Each style has its own unique attacks, combos, and movements. For instance, the staggered style does not have a parry, but instead has feints such as the ability to step back quickly from an oncoming attack and then thrust forward with an unexpected kick.

Fighters have two central attacks, light and heavy. These can be combined in multiple ways for combos. Each fighter has four directional stances they can take at any moment in the fight. They can control their stance with the use of the right thumb stick. The direction a fighter is facing at any moment can affect their ability to attack and defend themselves against one or more fighters. Each stance offers a new sequence of attacks. In addition to the light and heavy attacks, fighters also have access to defensive moves like parries and dodges. They also have special moves, such as the ability to heal or enact a force blast. These special moves use energy, which players can refill over time.

If that wasn’t enough, the move sets for each fighting style is fully customizable. This means players can create their own combos with the moves they collect throughout the game by encountering and defeating enemies. Each move ends with players in a different stance, which affects offensive and defensive options. By building specific chains of moves, all of which can be interrupted and changed on the fly, players can customize combos for every combat situation. I only had 25 minutes with the game, so it was difficult to wrap my head around the full range of possibilities on offer.

In practice, Absolver at times makes fighting look like carefully choreographed ballet. The movement is silky smooth and the possibilities at any given moment are staggering. When in a fight, players can lock onto their opponents and strafe around them, looking for an opportunity to strike. The game can be played as a simple brawler against single A.I. opponents, but it demands finesse and planning when facing human fighters or groups of A.I. fighters.

I did not get a sense of the size of the online world, but it seems to be rather large, and broken into several zones. The areas are constructed to lend themselves to intimate fighting bouts, though, so don’t expect wide open fields here.

“We are not Skyrim,” joked the Sloclap representative who showed me the game. “It’s not a huge open-world.” I played in a small outdoor area while exploring the world and inside a barn-like structure when engaging in a one-on-one fight with another online player. As I explored the outdoor area with one of the developers as my coop partner, we encountered groups of enemies and worked together to defeat them. This is a game that demands a lot of the player, particularly when facing multiple opponents.

In the controlled environment of the barn, the game felt more like a traditional 3D fighter as I faced off against a human rival. Dodging and parrying become invaluable against human opponents, and I found myself nervously dodging and strafing my opponent as we each traded blows and retreated to reposition ourselves. When players gain advantage, they can unleash devastating combos on their opponents, but these barrages can just as quickly be parried and the momentum of the battle reversed. It felt very dynamic and involved.

Absolver feels simultaneously accessible and intimidating, which should allow new players to jump in while also rewarding those players that spend a lot of time learning the ins and outs of the game’s deep mechanics.

In the relatively packed genre, Absolver aims to high kick over the competition by offering an incredibly deep and fluid fighting game that takes place across an online world rather than single battle arenas. At times, combined with the brilliant animations, the game feels like beautiful battle dancing.

Absolver will be available on Steam on August 29.

A media scholar who also writes about video games for various outlets. He's interested in digital game production, media industries, residual media, and discourses around gender, race, and sexuality in media and production cultures.
MORE LIKE THIS
Absolvere3 2017