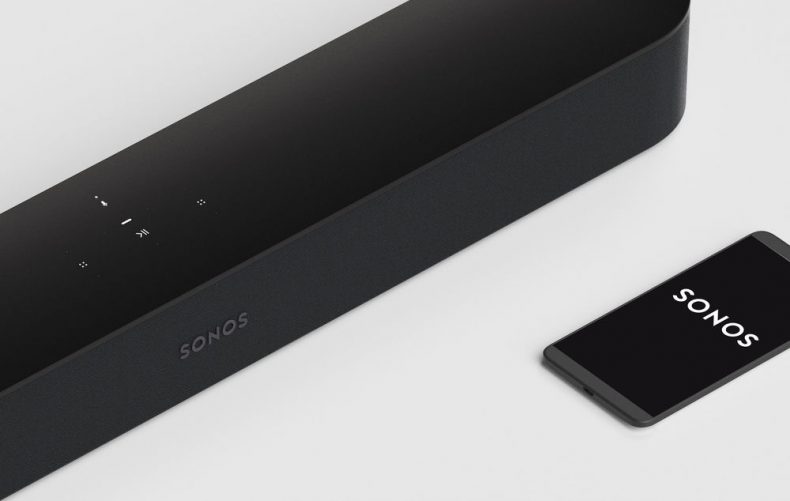 Soundbars can be a lottery. A quick google won’t yield any serviceable results, because there are so many on the market these days that you can nip down to Tesco and buy one for under a hundred pounds and, in all honesty, never knowing any better, be fairly happy with that purchase. But when it comes to audio, there’s always been a name lurking in the wings: a name synonymous with quality and high-level audio, and that name is Sonos.

After speaking with someone who worked on the Beam itself, situated in Abbey Road studios, I came away feeling as though that reputation is well-earned. These people love their audio, and while I’d normally be boring the pants off someone talking about how I know my oats because I’ve spent time in production, and recording, for near twenty years (across media and studio-work), it’s comforting to know there are others like me.

But what of the Beam, then? The unit sits snugly under my LG OLED, nestling between the curved base, and while it’s a slim form factor, it’s not tiny enough for me to say “it’ll fit your setup, no worries”. Check the measurements, because it wouldn’t fit in my lounge setup, despite being fine in my office. The branding on the front is small and inoffensive, and there are four touch buttons on the top of the Beam offering play, volume up/down, and a microphone mute button (more on that later).

The rear hosts a power supply port, an ethernet port, and one HDMI port: that’s it. While it comes with an optical to HDMI adapter (meaning you can happily use an optical out port on the back of a TV and still connect to the HDMI on the Beam) you’re going to get more out of it using your TVs HDMI-ARC port. ARC allows for a signal to be sent both ways, so while you could plug a PS4 into it, you’re better served using it to send the audio from your TV back to the Sonos Beam. Yes, that means you’re using a HDMI port for audio-only, but ultimately that means you can use voice activation to control your TV thanks to Alexa integration. Yes, that means you can turn your TV on and off with your voice. The future is here.

While we’re talking integration, it’s fantastic to see that Sonic is platform agnostic. This means that whether you’re using Alexa, Siri, Spotify, or anything, really (the music platform integration is superb) you can use it on the Beam. It sounds simplistic, but it all just works. At one point I had my iPhone sending music from Apple Music to a HomePod, Apple TV, and the Sonos Beam, all playing perfectly in time with one another, allowing for the wonderful moment where you can walk from room to room with the music filling your house. In a home setup with multiple Smart Speakers, or perhaps if you have Sonos speakers already, this is perhaps nothing new, but the fact the Beam works with Apple products is a massively welcome treat, because that’s not always the case. Sonos don’t care if what service providers you are using, it just wants you to be happy using them with Sonos products, and that’s remarkably refreshing in this day and age to see.

Setting the system up is pretty easy, offering a simple method of just getting it up and running, or if you prefer, a longer setup that allows you to walk round the room so the Sonos app can hear what’s going on in the distant corners of your chosen area. This allows the Beam to project audio that is tailored to its specific location, and while it’s not the easiest thing to test, I will say it filled my office well, with a surprisingly crisp yet deep bass. Elsewhere, the high end is superb, and it’s a testament to the volume and sheer grunt of the Beam that I had to adjust audio in FIFA 19 and PES 2019 because the crowd was so raucous it would drown out the commentary – and I don’t want you to take that as a negative, because even on broadcast sports, when the crowd really get going, that can happen.

Nuance in games and music are brought to the forefront of the mix, and, honestly, I can’t say enough good about how the Beam sounds. If you’re used to a old-fashioned method of satellite speakers to give you 5.1, you might feel the Beam can’t project like that, and although it’s not actually going to surround sound, you’re going to be very surprised by how well it projects audio. If there’s a tiny complaint it’s that it can get a little awkward if you choose to send a song to the unit and then start moving around (for example) your PS4 menus, it might kick back to the game sound. There’s probably a setting somewhere that can help prevent this, and it’s not a deal breaker, but it’s perhaps a sign that shows just how much this thing can do that this is even possible.

Amazon Alexa integration is excellent, and as ridiculous as it sounds, the voice recognition seems somehow better than our Echo and Echo Dot. Not once did it question my accent, or just simply not hear us: it just worked every single time.

Sonos products are normally not the cheapest out there, but in the Beam, we’ve got a fairly affordable, brilliant sound system solution for the home. For your money you’re getting a tremendous soundbar, but you’re also getting a WiFi speaker that works with all music services, AirPlay 2, and that you can even add a Sub to. The Beam is fantastic, surprising, and plays well with others. What more could you want?

Affordable
Amazing sound for the size
Plays nicely with everything

Could have more HDMI ports

The Beam is fantastic, surprising, and plays well with others. What more could you want?