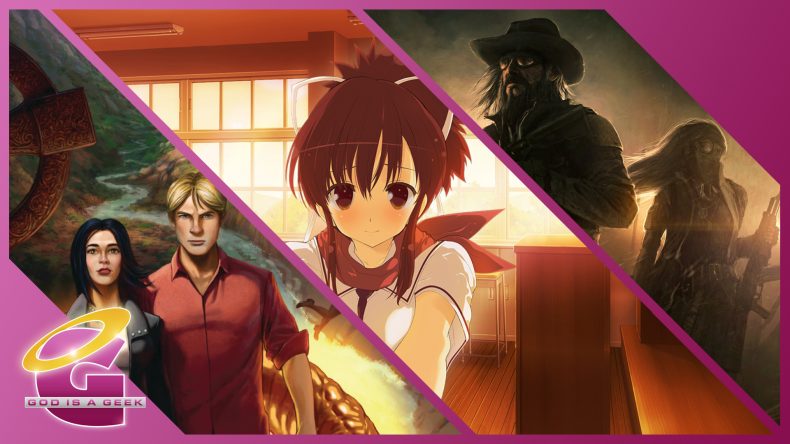 The 30th Switch Re:Port Review is finally here with a look at a game I never thought would release in the West, a port of a game I never thought would see a release outside PC platforms, and a port of a game on basically every other system. If you’re new to Re:Port Reviews here, I look at Switch ports of games on other platforms, Switch games in general, and more. I try and focus on how ports make use of Switch specific features like the touch screen, HD rumble, and single Joy-Con play. For this Re:Port Review, Mick Fraser reviewed Wasteland 2 and Nicola reviewed Broken Sword 5, while I tried to enjoy Senran Kagura Reflexions. I reviewed Broken Sword: The Serpent’s Curse on Xbox One three years ago and it has been nice revisiting it again on the Switch. These point and click adventures are perfect for playing on a handheld, curled up on the sofa or out and about, and Broken Sword is no exception. Visually, it looks as colourful and gorgeous as ever with the hand painted backgrounds and 2D, slightly cel shaded characters.

Following the adventures of George and Nico as they track down the people responsible for the theft of “La Maledeccio” and uncovering the mysteries surrounding it again has been delightful both in hand held mode and docked, with no real perceptible difference between either. In handheld there is some slight use of the touch screen which is limited purely to moving characters around and interrogating the various items on screen for clues. Personally, I preferred to play in handheld mode as opposed to docked.

Performance wise, in my original review, I noted that at times the flow of the game suffered a little bit from stilted character movement and awkward, stuttering dialogue, and it appears that this has not changed at all for the Switch version which is disappointing. There are moments where you are waiting for a character to finish an action before they will launch into conversation which has the effect of breaking the immersion at times. Thankfully, this does little to detract from the well-written and interesting story. New for the Switch version is a sequence of “Behind the Scenes” movies which are unlocked as you progress through the story and feature key elements of the design and development process as well as interviews with the Broken Sword team. They are a nice addition for long term fans, however they are hidden way down in the Options menu, which seems a little odd as opposed to accessible right from the get go for fans who are double or triple dipping on this.

Broken Sword: The Serpent’s Curse is a good fit for the Switch. In terms of the game play, it doesn’t add anything that previous versions didn’t have, however the addition of the bonus content showing the development process is a nice extra for long terms fans of the series. Games like this are more suited to portable play in general so it is great to have Broken Sword on the Switch.

Mick Fraser
Originally released on PS4, Xbox One, and PC and scored 8.5/10 When inXile ported Wasteland 2 from PC to console in 2015, packaged as the Director’s Cut, I was pretty excited. I played the hell out of it on PS4, falling a little bit in love with its post-apocalyptic world and strategy-heavy action. With Wasteland 3 announced for PC and console in 2019, the developers have decided that now is the time to port the previous entry onto the Nintendo Switch.

The biggest question this decision throws up is “Why?”. I can’t believe there’s a crowd of gamers anywhere who were just waiting for such a niche title to hit the Switch, but if they do exist then I guess this is for them. Wasteland 2 follows your ragtag group of Desert Rangers, part law enforcers and part mercenaries, as they attempt to keep the peace in the barren, radioactive hell hole the world has become. Everything has been carried over wholesale, which means you still have the option of choosing a preset team of four or making your own. It goes into an insane amount of detail where back story is concerned, allowing you to write biographies for every character, decide their religious affiliations, country of origin – even whether or not they smoke. While these decisions won’t impact gameplay, the rest of your stats will, and Wasteland 2 offers a robust suite of skills, abilities and attributes.

Standard RPG fare like lockpicking, bartering, and hacking will take up your skill slots alongside different weapon masteries, so you’ll want to build a diverse team to tackle whatever the Wasteland throws at you. Special perks offer boons balanced by banes, like, for instance, a talent that allows you to intimidate people much easier but means you can’t charm anyone. You’ll initially embark on a mission to find out what befell Ace, a legendary Ranger who recently met his tragic end. Missions take you across a scaled down world map complete with points of interest and random encounters. All the time you’ll be managing radiation sickness and dehydration, which can impair your abilities or kill you.

Mission areas are more intimate, aping classic RPGs like Baldur’s Gate or, more to the point, the original Fallout (also developed by inXile). Combat is mostly ranged, though enemies will use melee and you can spec for it. It’s turn-based and a lot of fun to coordinate your Rangers, taking advantage of cover and elevation to give you an upper hand where possible. It’s not forgiving, though, and if you don’t use every ability and trick available you’ll find yourself buried pretty quickly.

The gameplay is unchanged in the Switch version, meaning it’s just as playable as it ever was – the problem is how it looks and feels on Switch. Played handheld, the small sprites and iffy textures make it hard to see what’s going on. There’s also an awful lot to read and the font is painfully tiny. It would have benefited from some work on the graphics, but this port is the definition of bare bones, simply dropping the whole thing onto Nintendo’s console with narry a tweak. Slow-paced, considered gameplay means you probably won’t use Wasteland 2 much on your commute or in handheld mode, and if you’re playing docked, well, I’d only recommend it if you’re desperate to play it and you’ve no other console. It doesn’t utilise a single feature of the Switch, and yet doesn’t feel retro enough to win us over with its charm, either.

Wasteland 2 was a very good game on PC, and a very good port in 2015, but now it just feels like one more re-release the Switch doesn’t need. The lack of any attempt to improve visuals or utilise any new features means it feels like you’re just playing an old game, and Wasteland 2 doesn’t really have the charm or appeal to pull that off anymore. The Senran Kagura franchise has been mostly hit or miss for many people but I’ve generally really enjoyed most of the games. Until today, Bon Appetit was the only game I’d consider worth skipping but sadly, things changed for the worse with Reflexions. When this was originally shown off in Japan, I didn’t ever expect it to get a release in Europe. I even bought the Japanese release on the eShop and skipped through whatever dialogue it had to get into the “gameplay”. While initially pretty crazy, the novelty wore off quick.

Reflexions is more of a tech demo than a game with it being a great albeit perverse as heck use of the various hardware features of the Switch. It doesn’t support the Pro controller at all and needs to be played with Joy-Cons. While this is a romance adventure game on paper, there’s some basic dialogue you tolerate before you get to “massage” and hold hands with Asuka. If you ever thought the dressing room segments in previous games was pushing the limits of ratings boards, you ain’t seen nothing yet. While it is fantastic to see a game like this get localised and released on a Nintendo platform in the West, I wish Nintendo fans on the Switch had a proper Senran Kagura game as their first taste with the franchise after the 3DS entries.

While this is a unique showcase of HD rumble on the Switch, you will most likely get bored of the gimmick very quickly. The asking price isn’t much but this would’ve been better as a free to play experience with all the girls available as DLC rather than a premium release with DLC. If you’re a fan of Senran Kagura games, this might be worth picking up just to see how Kenichiro Takaki made use of various Switch hardware features. For everyone else, wait on a proper Senran Kagura game for Switch or buy Estival Versus and Peach Beach Splash. They offer a ton more and are worth buying.

You may also like
Broken Sword 5 - The Serpent's Cursenintendo switchReviews

Broken Sword 5: the Serpent’s Curse Coming to PS4, Xbox One