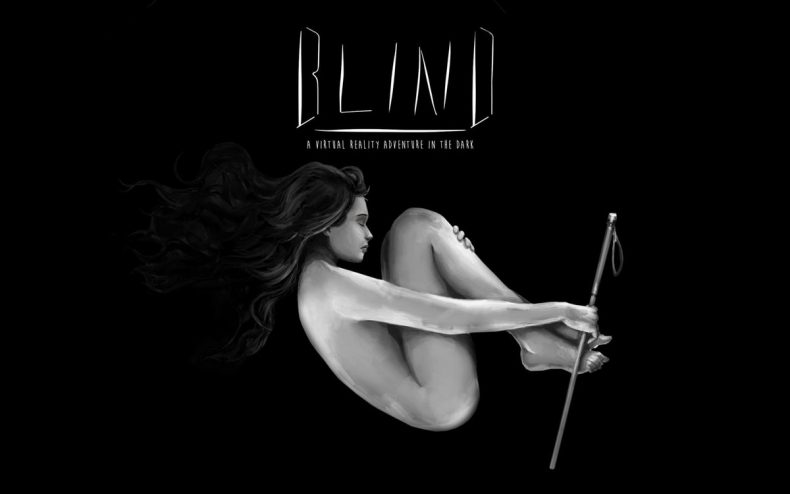 Blind is a game that removes the freedom of sight, and for its reliance on VR that seems a bit of an odd choice. For much of your time, you’re relying on your cane as well as various sounds emanating from certain spots within the mansion. It becomes a constant pain, but I guess that’s one of the developers goals – trying to recreate the frustration that must come with the inability to see. Blind uses echolocation as a guide, helping a young girl called Jane to find her way around a creepy mansion and solving various puzzles to help her find out what has happened to her little brother, Scott. Things aren’t what they seem, and you’ll start to realise the unsettling nature of your situation as you progress.

What makes it even creepier is the presence of a mysterious guide known as The Warden, with a head made up of triangular shards, and a voice as unsettling as the Luteces from Bioshock: Infinite. You’ll never quite know when he’ll pop up, and it all starts to get a bit weird, but you need him to try and work out what’s going on – he’s all you’ve got. At the very start of Blind, Jane and Scott are driving down a road that’s being pummelled by the rain, when suddenly you’re involved in a car accident. The next thing you know you’re in a mansion, everything in black and white, and you’re struggling to see. Being blind, you’d have thought that meant almost everything would be at least difficult to see, but much of your surroundings are visible despite the odd blindspot. Sound illuminates areas that are near it, and after unlocking the ability to use the cane earlier on, everything becomes visible if only for a few moments.

You can use the move controllers, but having a standard controller is much easier, using the left trigger to control the cane and the right to pick up items and investigate them. Depending on the strength at which you press the left trigger, the louder or quieter it’ll strike the ground. Make too much noise and it could be a problem for you, but press it softly and you’ll not see further than a few feet away. The constant pangs of light and constant readjustment to what you see actually made me feel nauseous, and ever since I’ve played VR this is the first time it’s affected me. There’s a lot to focus on while you can see, and once it cuts to black again, your eyes take a bit of a hammering.

The puzzles in Blind aren’t at all straightforward, often being obtuse or void of logic. It was one of the first puzzles I completed that had me exploring a room for well over 30 minutes to try and work out what I was supposed to do. Even though there was a gramophone playing the voice of The Warden into the room seemingly giving me clues, none of them were to clear enough to be deemed useful. There was a stand in the middle of the room with an ornament of a woman on it, and three shapes that looked as though specific items were to be placed there. One of the items was relatively easy to recover as it needed me to manoeuvre a ball around a maze to unlock it. The second was much harder. After removing some of the paintings on one of the walls, two dials were found, and like a safe I had to twist them in the right way to open a panel there the second shape would be. The thing was, there was no indication how I had to move them, no hints – just a case of trial and error. I didn’t know how many times I had to move them and in what direction, there was just a scratch mark on the wall that must have been some kind of a clue; I still don’t know how I did it. The third required me to repeat a melody of the piano music playing on the music box. This wasn’t too tough, but the previous puzzle had left a bad taste in my mouth, thinking to myself if all puzzles were like this I wasn’t going to enjoy it.

Many of the puzzles require far too specific answers, and I began to fall out with Blind fast. It’s not the fact you’re playing whilst suffering from visual impairment either, just the answers were often too hidden via myriad curveballs. Some items within the puzzles are often required to be placed in slots, but the controls are often difficult to use, especially when picking up and placing in the required position.

Blind is a pretty game with nice art direction, but the puzzles let the game down. The manipulation of light is tough on the eyes, and the echolocation could do with some work as well. It’s always disappointing when a game with so much potential gets bogged down by its ideas, and this one is no exception.

Whilst the story is good, and the mansion creates an uneasy atmosphere that begs to be explored, the puzzles are far too specific, and the lighting and design within the environment is hard to process in VR.