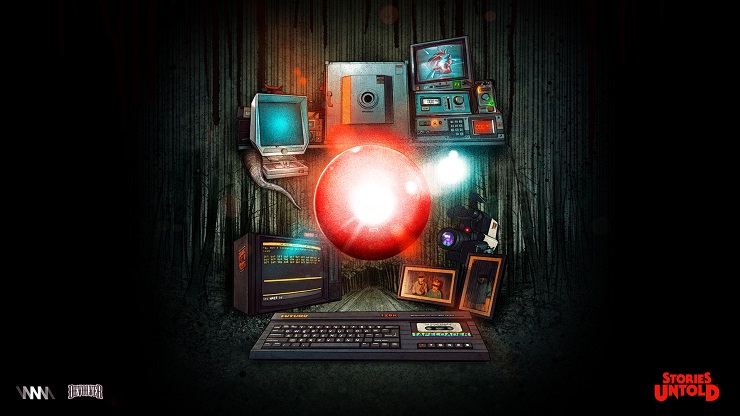 Text adventure games are something of a relic, but one that is very special to a lot of developers. These fantastic pieces of media from an age of incredibly low computational power offered true interactivity to a story that filled your mind with ideas and imaginations. They were the evolution of books to an interactive medium that exploded into a well-loved genre, even today.

Stories Untold is a text adventure with a difference, because it’s not just a dark screen with high-contrast text burning permanence into your retinas. It’s a whole desk space – sporting an old CRT monitor, keyboard with a built-in tape deck, and all – to really make you feel as if you’re sat there playing the game. It was incredibly surreal at first to be sitting in my chair with the lights off looking at my current-day monitors, upon which was ‘me’ sat in a dimly lit room looking at something so very close to what I used to play games on as a child. It was as if I was playing a younger version of me. This is the intended feeling. This is a horror game made tenser by the fact that you are doing the very thing in the real world that the virtual ‘you’ is doing. Bravo, No Code, you’ve made me feel uneasy and I haven’t even started!

The first episode is called The House Abandon, and this is the episode I’ll be referencing since it’s the one that will be the least impactful as far as spoilers go. Since this is a horror game you’re going to expect eerie things to occur. The way you’re placed in front of the desk is not just to show the setting and era that the game is set in, it’s also a way to ground you into the world. The text adventure has us arriving at a holiday home with feelings of optimism and a sense that the place is one of happy memories. The game is very good at giving you just enough of a hint to keep you progressing, so out of the car we hop with the required items in hand and into the house we go. After restoring power to the house and exploring the downstairs, we head up the stairs to what we’re told is our room and unwrap a gift that’s been left for us by our father: a retro computer and a game. We’re three layers deep at this point, playing a game about someone playing a game, where that character is also about to play a game; all of which are called The House Abandon. As the game inside the game loads I can’t help but feel like I’m in for one hell of a ride.

It is at this point where I first jump out of my skin and hit the ceiling. Loading The House Abandon within the text adventure caused the lamp on our desk to throw sparks and turn off. Then the game continues without skipping a beat – unlike my heart – in a familiar setting. We’re outside the very house we started at, except this time the atmosphere is heavier and far from idyllic. The yard has been neglected, the house has been abandoned, and everything is falling apart. Reading the note from the car’s glovebox this time around makes my back straighten and my blood chill. As we turn on the generator the lamp on the virtual desk flickers back on, illuminating the items there once more. The photo frames on the desk now have black lines over the eyes, the light is intermittently flickering, and my heart drops as realisation dawns. As my Australian friend would say: “Yeah nah mate!”

No Code have ticked a massive box in my personal little list of “Sold!” criteria in that they’ve taken a genre or concept and twisted it to be something else without compromising on either side. The fact that this is now a game within a game within another game was a neat idea to begin with, but to put you in the seat of a character that is playing out a horror game and somehow affecting their own world? That’s just levels of creepy and eerie that I didn’t think I needed in my life, but here it is giving me goosebumps and making me grin simultaneously.

Now is the time for the game’s audio design to take over. Aside from its wonderfully retro theme, the game’s voiceovers and sound effects are a poignant exclamation mark that makes your heart beat faster, lurch to your throat, or stop dead in its tracks. This is where being placed in front of a virtual desk really elevates the atmosphere. We’re not greeted by jump scares or sudden loud noises, though there are moments of this scattered throughout. No, the audio is deliberate like an opening door somewhere else in the house, the creaking of floorboards approaching, or movement above you. The last part of this opening chapter chilled me to the bone so completely, on both a sound and visual level that I needed to take a 5-minute break to recover.

After finishing all four chapters of Stories Untold, my total time played was 5.3 hours. Not the longest game, but I have to admit that it felt a lot longer than this- perhaps because I was shitting myself thoroughly the whole time. Each episode puts you in a different setting to the last and provides you with an increasing number of things to interact with outside of a computer screen. More advanced puzzles are introduced to give respite to the tension, all the while helping to tell a story that in the final chapter ties together perfectly.

In its entirety Stories Untold is a very interesting set of stories told masterfully. As the game’s tagline goes: ”Four Stories. One Nightmare,” and what a nightmare it is! Even thinking about certain parts of the episodes gives me a wave of goosebumps across the back of my neck as if someone is behind me… staring…

Rising heart-rate
Fear of noises in your house

If you're looking for a tense, unnerving experience in a simple yet eerie setting, this is it.