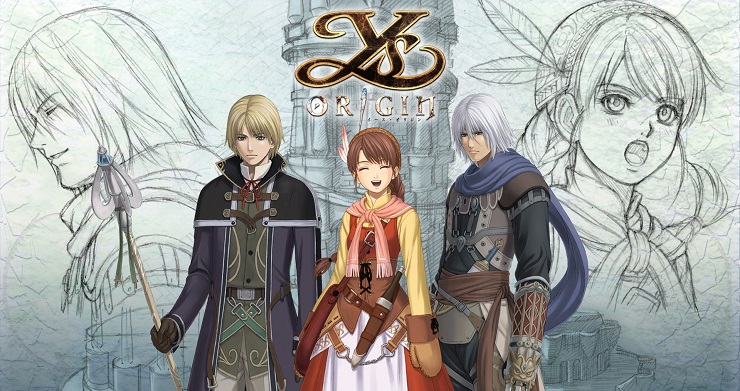 With the Ys VIII news and my Xanadu Next review on the site, it feels like we are talking about Nihon Falcom games too much. Announced at PlayStation Experience, Ys Origin finally jumps from PC to PlayStation platforms thanks to the talent at DotEmu. Ys Origin serves as a prequel to the Ys franchise and it was the only game that hadn’t been ported to PlayStation platforms until now. While the port isn’t perfect, Ys Origin on PlayStation 4 gave me an excuse to replay an action RPG classic from over a decade ago today.

Taking place 700 years before Adol Christin was a thing, Ys Origin will explain where everything began before modern Ys games take place. The land of Ys was attacked by huge demons and two goddesses took the land into the heavens. A tower was created before the goddesses disappeared. Your aim is to traverse this tower as one of three protagonists. Tales are told from different viewpoints of the two protagonists you can choose between on beginning a new game. The third one is unlocked later. While the majority of the story plays out the same with both protagonists, their fighting style is vastly different. Yunica is a mêlée attacker with an axe while Hugo is a ranged mage. Yunica will make Ys Origin feel like a hack and slash action RPG and one that you are probably familiar with if you have played Ys Oath in Felghana. Hugo on the other hand adds an aspect of bullet hell to the fray which makes replaying it fun. The tower has its own set of bosses every few floors and it reminded me of Tartarus from Persona 3 in structure a few times. There are a lot of sections that require certain skills to be used to progress to areas that would be unreachable otherwise.

Speaking of boss fights, they are most definitely the highlight of the combat. Falcom managed to create dramatic entrances for them and make each fight test your mettle. I mean just listening to “Scars of the Divine Wing” play at PSX when the port was announced got me hyped up and hearing it in game again felt great. Boss battles test your reflexes, memory, and strategy and are what the series is known for. DotEmu has ported the original Falcom PC release to PS4 with enhancements like widescreen and 60fps. The framerate is almost constant barring a few sections that had a random frame skip or slowdown occur. Nothing major, but hopefully these can be fixed in a future patch. Another thing I noticed in the port was how the opening had a weird visual glitch with a line visible on the top and bottom after switching scenes.

Aside from the performance, the visuals hold up well but setting everything to maximum on the PC version that released in 2012 will result in better ground textures which is easily evident. Character models and enemies look great in this version and I’m glad to see the interface crisp compared to what I experienced with some of the PSP ports on PC from Falcom. In a lot of cases, reviewing a Falcom game is an expensive endeavour. I almost always end up buying the soundtracks digitally and sometimes importing Japanese releases. Thankfully with Ys Origin I already owned everything for the music. Scars of the Divine Wing is one my favourite boss themes in a long time. The rest of the soundtrack has a nice helping of keyboards thrown in reminding me of some of the 90s game soundtracks with a Dream Theater touch. Aside from the soundtrack, I appreciate the French narration in the opening video.

Ys Origin on PlayStation 4 is a great action RPG that will appeal to anyone looking for a mechanically competent and musically magnificent experience from over a decade ago. I really wish this was available on PlayStation Vita right now because that’s where I’ve played most of the Ys games, but alas I have to wait for May for that version.

Ys Origin on PlayStation 4 is a very good port of a classic game that is the prequel to one of the best action RPG franchises of all time.

5 Japanese games you need to play on Xbox One