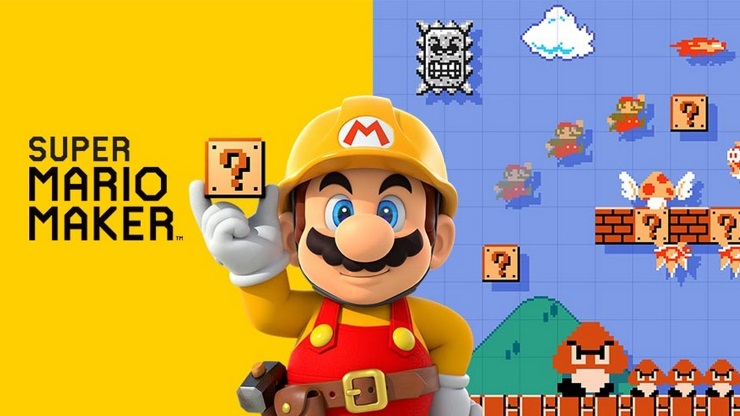 Before we had the internet, we had to find other ways to entertain ourselves. Some of my more talented friends would draw pictures of their favourite characters, which of course included Mario. It’s hard to believe that, somewhere in an ancient archive somewhere, there’s probably some graph paper littered with similar, but far better, drawings of Mario levels. Literal design documents that bore fruit that shaped so many gaming tastes going forward, creating nostalgic memories of the very best kind, and games we’d cherish forever.

Take LittleBigPlanet, for example. The biggest problem it faces in comparison to the Mario series is that the platforming itself just isn’t tight enough. It’s simply not as good. The level creation tools may have given people the change to forge some crazy creations, but I’ve never wanted to actually get involved. The idea of moving objects around with the analog stick isn’t appealing, and it’s neither responsive, nor quick enough. Mario Maker fixes all of this by being one of the few Wii U titles that makes the GamePad feel vital to its being. You are drawing your own levels. You are creating with your own fingertips, which means everyone can get involved. Isn’t that fantastic? Doling out the mechanics over a period of nine days may seem like a terrible idea, but unlike with, say, Splatoon, it works well. It’s a little slow (I’d have preferred a large reveal over, let’s say, a week, though you can change the system clock to get around this roll-out), because as someone who plays a lot of games, I felt I had exhausted not so much what I could do with the tools, but what I wanted to do. I knew there was more to come. I knew that soon I could create my own Super Mario world 2, with branching lower levels via pipes. But to the younger audience and people who aren’t as familiar with games and their systems, it’s a smart idea to tempt them back over the days, each time giving more reason to keep creating.

And there’s some lovely stuff here. You can create self-completing levels that take an enormous amount of dedication to design, or you can create obscenely hard courses full of giant Goombas and Koopa Troopers. You can add your own sound effects so that when your friends hit a question mark block it shouts “Arse” in a Father Jack manner (though be aware these revert to standard noises once online), or you can have six massive Bowsers shooting flames at you from every angle while multiple giant (why wouldn’t they be giant?) Kameks also throw projectiles at you, like in some crazy, warped bullet hell version of Mario. Incidentally, thank Dalagonash for most of those courses… the sadist. Hell, you can even have a Bill Blaster that fires masses of coins, if you want to.

What it truly teaches, however, is just how hard it is to make a truly great Mario course. Would-be creators might think they’re the best, but venture online and it becomes abundantly clear there’s always someone cooler than you out there. Miyamoto is a genius, and at times Mario Maker almost feels like he’s saying “Go on then, you bloody well make it if it’s so easy”, because this is a reminder of the exultant joy that can be beholden from the great man. Despite this, its intuitive and approachable. The second you want to test something, you can do so with the tap of a button, before instantly being back in create mode to fix it up and perfect it.

But this is also a funny game. For no apparent reason a dog will be riding a rocket across the screen, and every new day you play will show a mini-skit taking Mario off the screen and plopping you down into the creation mode. Silly, quirky musical cues that play out as you add something to the course are pure Nintendo magic, and there’s something inherently amusing about seeing Super Mario Bros. look like, well, not Super Mario Bros. at all. It all works so well, and switching between each game type or preset background is instant, and always impressive. A block containing Yoshi in Mario World of Mario U will give you a Goomba’s Shoe in Mario 3, and the end-level flags will instantly change to match the theme. Each style has individual physics to it, but the older games feel slightly more modern, control-wise, and look visually spot on, with smoothed out pixels.

Jumping online, Nintendo has nailed it here, too. Curating appears to be heavily community involved, as you can favourite creators and courses. You have a default of ten courses you can upload, which can be increased as you’re given coins from people enjoying your creations. There’s the 100 Mario Challenge, which gives you a hundred lives and asks you to go through eight community designed levels. The offline mode is the 10 Mario Challenge, and features Nintendo creation courses, but the online hosts some truly hardcore challenges. You can’t just upload any old rubbish, though, and as you attempt to send to the community, you’ll have to complete the level yourself to prove it can be done. Simple really, but sensible all the same. With no system level achievements or trophies, there’s no benefit to designing stupid courses, here. The only issue is with Amiibo. In Super Mario Bros. levels you can pop one of the highly collectible figures onto the GamePad and hide them in a question block. Appearing as a mushroom with a question mark on it, once grabbed you’ll transform into an 8-bit version of them. A few levels already appear to be runways full of question mark blocks that feature every available Amiibo. It’s a form of showing off your collection, I guess, but hopefully this will be the minority, and there won’t be lots of levels like that.

Super Mario Maker feels like the game Nintendo’s Wii U was designed for. It’s harsh to wonder if fortunes could have been different if it had been a launch title, but it’s also a stark reminder that Nintendo is out there taking risks. An online third-person shooter involving Squid came earlier this year, and now we have something that you’d assume was some crazy ROM-hack. Only it’s not. This is real, and brilliant. It’s the possibility of a thousand new Super Mario World levels, hundreds of mini-sequels to Super Mario Bros. 3. It’s the chance to challenge yourself and try to match the master of platforming with his own tool-set. It’s magnificent, it’s crazy, and it’s for everyone to enjoy. Truly inclusive, Super Mario Maker is the game you’ll smile the most at this year, and worth every penny.

Tool roll-out will be slow for some.

It's magnificent, it's crazy, and it's for everyone to enjoy. Truly inclusive, Super Mario Maker is the game you'll smile the most at this year, and worth every penny.