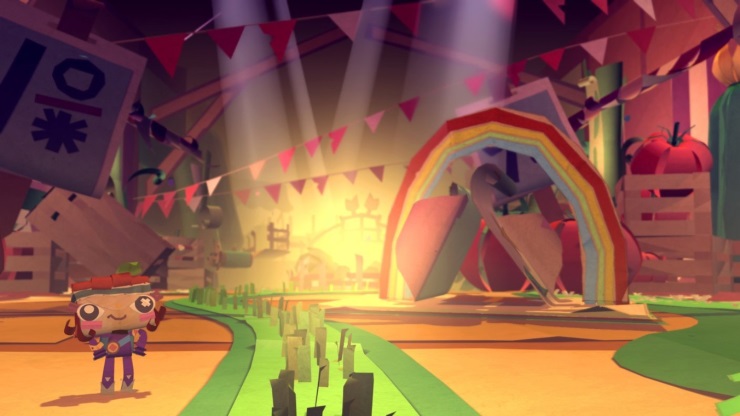 I’m going to let you in on a secret here, folks: Tearaway is the best game Media Molecule has made, and is the best game Sony has published on the Vita. But MM isn’t the type of dev to drop a lazy port onto a new system, so with Unfolded, it’s recreated the game from scratch, added lots of new bells and whistles, and tried to take advance of the opportunity to move from the small screen (from a game that was damn close to being a 10/10 when it was released), and utilise the big screen, and the new controller.

The story centres around your chosen messenger, Atoi (female) or Iota (male), and their journey to deliver a message to you, the player on the other side of the TV. Plug the PlayStation camera in and you’ll see yourself in the sun, waving down at the world just as it is invaded by Scraps: newspaper-covered, box-shaped enemies hell-bent on ruining things. The DualShock 4’s functionality is used right away: holding R2 or L2 shows a light-bar shaped illumination on the screen. So motion controls, then, that allow you to light up the dark for your messenger, or just remove the grey newspaper coverings from the normally colourful environment. The journey takes you across a few lands, but Media Molecule has added multiple areas that weren’t in the original. If you’ve played Tearaway before, at first it feels like Unfolded is making you think your mind is playing tricks on you. Rather than you having a bad memory, it becomes quickly apparent that Unfolded has so much new content that it feels like a new game rather than a remake. Instead of just putting out a new version of a game that was great on a system with low ownership numbers, this feels like the ultimate version of the game. There’s more story, more levels, and new mechanics that fix some of the issues that existed before.

Firstly, there’s no rear touch to worry about. As you bounce around on drum-like trampolines, you don’t have to fumble at the rear of the Vita hoping you’re getting it right; instead this is all done on the touchpad: push it down to depress the drum, release to make the messenger jump. Where the story once went in a certain direction, even the transitions between areas have changed when it comes to the narrative. The touchpad comes into play again when you are able to control the winds, and this gives way to another new mechanic, allowing you to craft a paper plane and fly around on it. Motion controls are used sparingly through the original portions of Tearaway, but some of the new, more tricky levels employ them heavily. They work well and add a layer of difficulty that wasn’t really there before. Another new idea is that your messenger can throw objects out to you, allowing you to simultaneously control them, and then throw something back at an enemy. It sounds complicated but it works well and feels natural. You now draw using the touchpad, but you can also connect via iOS or Android device and be more elaborate, or even just take a picture to put it into the game. It allows someone else in the room to interact with your game, but it’s something that has an active participation in the world of Tearaway Unfolded, changing how things look.

It’s worth mentioning, of course, that Unfolded is gorgeous. The world is entirely made of paper, even down to the smallest touches. As you progress you unlock papercraft models that you can go online and print out, if that’s your kind of thing. Unfolded stands out so much because it’s colourful, and full of character. The creatures that inhabit Valleyfold (and the other places you visit) all feel so strange and unique. Squirrels pop up all the time, always when you need them, but at other times you’ll want to grab an item, and a group of them are playing catch with it. It’s tempting to just pick them up and punt them into the endless void below, but somehow you’ll be attached enough to resist. The Scraps are the source of darkness in the world, but even they seem oddly humorous in their character design. As you unlock mechanics (the jump button is quickly unlocked) you find new enemies and ways to dispatch them. The new control method feels designed for the PS4, rather than something that’s been remodeled out of necessity. There are multiple moments that will make you gasp in awe, and the only real complaint is that occasionally the camera becomes unwieldy, and sometimes gets stuck behind something, or is too zoomed in at first.

This is a new high bar for remaking games. From now on, Tearaway sits in a category all of its own. So much is new, that it’s almost closer to a sequel than a remake: a vastly longer end-game, as well as a changed introduction, entirely new controls, revamped existing levels to fit those controls – this is an astonishing version of an already terrific game. By the time the eight hour campaign comes to a close you will be enraptured, and truly feeling the love from Media Molecule towards its creation. The best Vita game just became one of the best PS4 games. Utterly essential, you must buy Tearaway Unfolded, so it can finally get the love it so richly deserves.

Watch a NSFW video of Adam & Colm playing the game.

The best Vita game just became one of the best PS4 games. Utterly essential, buy this, so it can finally get the love it so richly deserves.