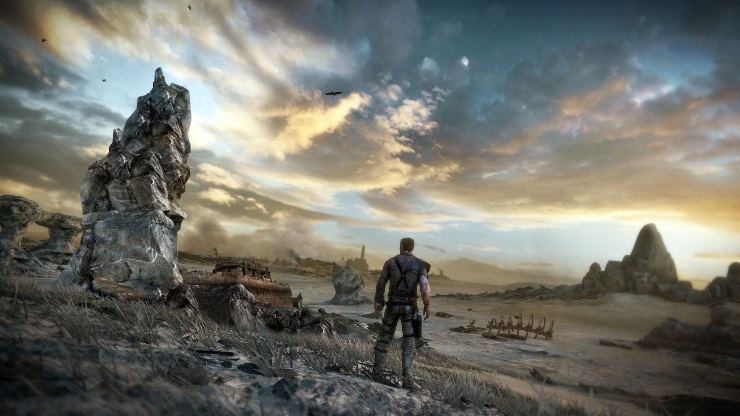 Releasing a movie tie-in game usually goes one of two ways: either it’s a rush job thrown out with the movie to get some quick bucks, or the developer actually has the time it needs, regardless off the potential loss of income because of a later release date. Thankfully, Warner has allowed Avalanche the time to make a solid, vast open-world that is a lot more fun than the colour palette might suggest.

And there is an enormous amount going on in Mad Max; just so many systems operating at once. You can upgrade Max, or his beloved car, The Magnum Opus, whenever you like from the pause menu with scavenged scrap (the currency that runs the world), but there are core abilities that you can only level up using tokens received from completing challenges. These are the important ones, really, as they increase things like Max’s strength, or health, or even how long a full tank of fuel might last. But you can only upgrade these at set locations. They’re not hidden and are on your map, but it’s a little odd to have a conceit like this in play when there are so many moments that flaunt how gamey it is.

Take Max himself, for example. Once the car takes a certain amount of damage you’ll have to get out and wait while your companion, Chumbucket, fixes it up. But the enemies don’t care, and will keep coming at you. The AI here is quite smart (elsewhere they will expertly dodge you as you drive around engaging them), and will just try to drive right over you, but if you have a decent amount of health, you’ll stagger a bit but not die. After a few dodge rolls and a bit of running round in circles (get used to doing this, by the way), you can jump back into your ride and get moving, harpooning a Wastelander out of his car to certain death. These moments are as stupid as they are cathartic. The way you can take damage is obscene, but all is forgiven when you enter slow-motion, harpoon a guy right in the chest and tap circle to quickly pull him from his vehicle, whereby he whips towards you, which lets you ram him head-on. The harpoon gun is a triumph, and the most Avalanche thing here. Driving around firing it into sniper towers and pulling them down never gets old, and the sniper rifle mechanic is interesting, too. Rather than giving you a sniper to run around with like the shotgun you have, it’s fired from the back of your car. Chumbucket can drive the car for you (though you control it) and you can creep up to enemy bases, slowly picking off their snipers. Again, it never gets old.

Thankfully the wasteland survival ideas are well implemented. Water is scarce, sure, but most of the time you’re in a situation where you’ll need to use it to heal, it’ll be some kind of stronghold (small or large) so there will be a tap, or pool to fill up your flask. Gas is needed to keep your vehicles running, but it takes a while to use it, and again, tanks can be found at populated areas. In a nice touch, you can put a spare canister in your boot just in case you run your tank dry, but you can also pick it up and throw it at enemies, exploding it with a shotgun burst.

The combat is the Batman Arkham melee method that, quite honestly, I’m nowhere near tired of. Mad Max’s world is a brutal one, and although you can happily pummel away at combos with the square button, and counter with triangle, things are mixed up with the addition of unlockable extra moves. A particular good one (early on) is simply to hold the attack button after two hits for a strong finisher. You can pick up weapons and integrate them into your move-set, too, and if you’ve collected any shivs you can finish people with them. Or, should you buy the skill, you could just get in close for a shotgun to the gut – it’s a one-hit kill, obviously. It makes for a violent, bloody system that feels damn good. Car combat is less successful at first, but not bad. Depending on how upgraded your vehicle is, you can use the harpoon to differing degrees of success, but you can also target the red barrels in the trunks to quickly blow them up. On top of that, another option is to simply ram into your enemy – which has varying degrees of success depending again on what you’ve spent your scrap on. There’s a lot of car combat, though, and the slow motion aiming is a Godsend that removes most of the frustration. But you’ll have to get used to it, as you’re a sitting duck if you leave the Magnum Opus for too long.

It’s a very a-typical open-world game, in many ways, but one that’s faithful to the source material, especially when it comes to the characters. Max is an utter dick, but a badass with it. No matter what people do to help, he’s never nice to them. You could argue that this is because of the harsh, barren world he inhabits – everyone here wants to kill you, or use you for a deal. But the character you warm to the quickest is Chumbucket, so it’s hard to hear Max continually abuse him with his negativity. The voice acting is fine, for the most part, but the downtrodden, gruff Max is a little hard to like. It’s a very comic-book like universe, and the people are designed to match: burnt skin, tattoos, and even one guy who has razors cut into his skin – I’m not sure if that’s for effect or so he can keep his face beard-free.

What Mad Max does best, however, is never, ever take itself seriously. The opening cut-scene (which I won’t spoil, obviously) is over the top, but also features a gruesome chainsaw scene. As you take control for the first time and realise the person in that scene isn’t dead, you realise exactly what kind of game this is. There’s no logical reason how he can be alive after what you saw, but there it is, and he’s the main antagonist you’re fighting back against. The story is generally fine, but nothing special. Most main missions see you have to chase something down and take someone out, and although there’s an attempt to make you care now and then, it falls flat. The fun is to be had just exploring, maybe getting caught in a horrendous storm that nearly takes your life.

Technically, there are a few frame-rate hiccups that are seemingly par for the course with open world games, but otherwise the only way Mad Max suffers is because of the source material. Fire, sand, metal – the trifecta of the world. You can’t blame Avalanche for keeping to that, but it does sometimes make for a bland looking game. There are some excellent moments, though, like those storms, or when night is setting in and it gets cold. Particle effects and explosions are fantastic, and there’s a real sense of style despite the brown look, especially when it comes to the gorgeous sky.

Mad Max is a fun game. You’ll happily lose an hour or two here and there, and feel great about it Nobody quite does that open-world charm like Avalanche, and the harpoon never stops being a source of mirth. The combat is great, and if you’re after an open world third-person title, you could do a lot worse.

Story is a bit dull.
Car combat won't be for everyone.

A fun game with a few nice touches that is let down by lacking any real wow-factor. Nonetheless, worth your time if you're looking for a well designed and executed open world game.