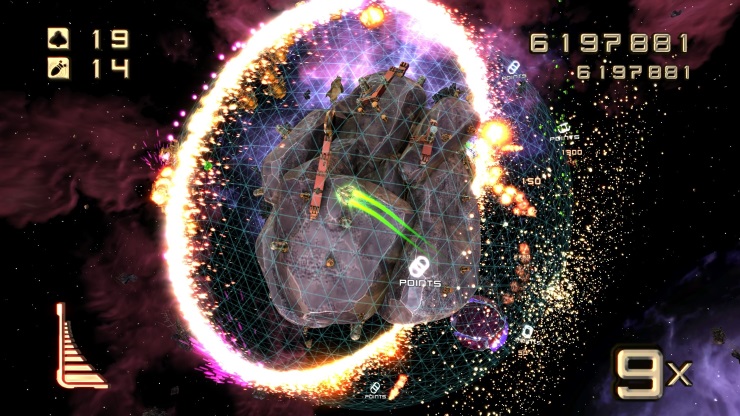 Super Stardust is the baby of one of the gaming industries most under appreciated developers: Housemarque. The original Super Stardust was released for the Amiga in 1993, and the game has seen several iterations since, finally resulting in Super Stardust Ultra rocking up on the PS4.

Ported to the PS4 by ExDev Studios Europe, Sony have successfully managed revitalise Housemarque’s original classic by adding a deluge of interesting game modes, yet the game falls slightly short, as some functionality that one would expect to see on the latest generation is absent.

Arcade mode remains as the main core of the game, which challenges players to fight their way through five planets, with five waves of increasingly difficult enemies in each. The aim of each mission is to destroy the asteroids that lay in your path with your multi-directional, ever firing cannon. Once you’ve laid waste to the asteroids, green orbs will sometimes be left in their place, which (once destroyed) will give you something to help – like an extra life, shields, or an upgrade for one of your three weapons: either the rock crusher (standard), gold melter (fire) or the ice splitter (self explanatory). All this his happening while you freely tear-arse your way around the planet trying to slay enemies and avoid falling rock-clusters.

This is the part where I found myself most entranced by Super Stardust, as the super responsive nature that the smooth 60fps provides allowed for some incredibly tight evasive manoeuvres, which lead to some very tense, sweaty palm moments as my high score was building and the space in front of me grew increasingly sparse by the second. The superb music (of which you have three choices: default, retro, orchestral) that plays whilst you’re blowing asteroids into smithereens makes you feel like a bad-ass too. There are also two other pieces of equipment that can help you with your quest in the form of bombs and boost. The smart bombs will decimate everything in your surrounding area, allowing for a clear path to regain your breathe. However, the number of bombs you have is limited, and knowing how to use them at the most opportune moment can be the difference between survival and death. The rechargeable boost allows you too escape from sticky situations by blasting through everything in your way.

Once you’ve finished with the arcade mode, there are plenty of other options to keep you entertained, as you strain to climb the leaderboards. One of my personal favourites is Blockade, a Snake-style mode that sees an endless trail of cannon resistant rocks follow behind you. The only way to survive here, is to create a hole and boost through them. You must survive as long as you can whilst also dealing with asteroids and enemies. Impact mode is also great fun, with all other weapons disabled, the only way you can score points and destroy enemies is to blast through them using your booster, which has to be recharged before it can be used again. It leads to some tense and difficult spells of dodging enemies, as you pray for the beeps of your booster to sound again.

However, despite the addictive fun of the game, there are a few noticeable drawbacks. First of all, the looks of the game have certainly faded over time, as it seems little work was done to improve them from the last iteration. It’s not ugly by any stretch of the imagination (the particle effects are breathtaking at times), but the planet and the rest of the backdrops don’t really meet modern standards, especially when compared to Housemarque’s latest game Resogun. Ultra’s online functionality is also quite disappointing. The leaderboards are limited to the highest 1000 scores, so all those who don’t make it on there are given the position of ‘1001’. Speaking as a player who isn’t “top 1000 good”, I do feel slightly left out by not being able to see just how well I’ve done in comparison to the rest of the world.

Multiplayer is also limited to only shared screen, with no way to either fight against, or with your friends online. Although you can challenge your friends to better your high score and there’s a very interesting ‘Interactive Streaming’ mode which, if you’re lucky enough to have stream viewers, allows said viewers to dictate the flow of your game by either giving you aid or sending more enemies in to fasten the pace of your demise.

Super Stardust Ultra definitely isn’t as complete with features as it really could have been, but the core experience is still as fun and compellingly addictive as ever.

The best way to enjoy the classic space shooter today, and it’s just as compellingly addictive as ever, but a lack of online functionality holds it back.