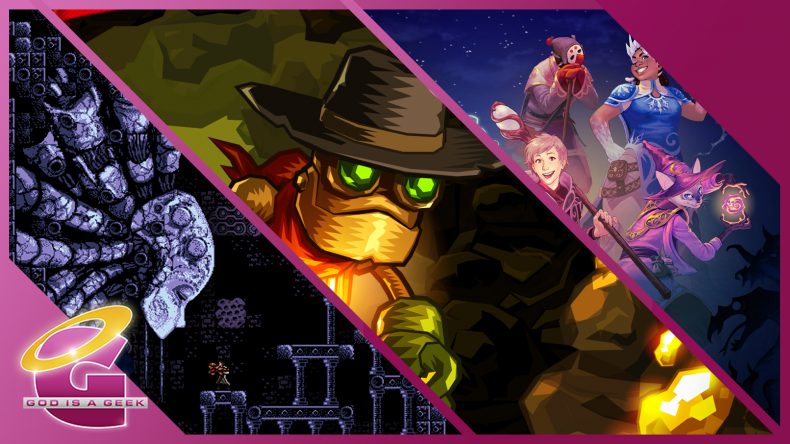 It’s time for round 4 of the Re:Port series that looks at Nintendo Switch ports of games that originally were on other platforms or just how the Switch version of a specific game is. Today, we have reviews on lots of different genres. We have Axiom Verge (Adam Cook), Nine Parchments, Sky Force Reloaded, SteamWorld Dig, Crypt of the Necrodancer: Nintendo Switch Edition (all from Mikhail Madnani). Grab a chilled beverage, your Switch, and have a read then.

Originally released on Nintendo 3DS, PlayStation 4, PlayStation Vita, Xbox One, Nintendo Wii U, and PC platforms and scored 6/10 on August 20, 2013 SteamWorld Dig is the game that put Image & Form on the map for most people. It was my first experience with them and I loved it when I played it on the Vita. At the time I didn’t own a 3DS but I’ve gone on to getting the original SteamWorld Dig on every platform through the years. In fact it has been nearly 5 years since it debuted on the eShop on 3DS as well. SteamWorld Dig has you play as Rusty who is a steam powered robot looking for his forgotten uncle in a mine. While obviously pretty barebones compared to SteamWorld Dig 2 which is beyond amazing, this is still worth playing although it is a step back in almost every aspect.

I was obviously super happy when this was announced for the Switch because it did feel weird having SteamWorld Heist and Dig 2 but not the original Dig on the platform. The Switch port is fantastic but I feel like they could’ve done slightly more. The big omission for me is the lack of HD rumble. Other than that it looks and runs fantastic. It even has touchscreen support for menus which is something I wish more games did. The platforming and lite combat are all a joy to play on the Switch and I’m properly revisiting this was the first time since the Vita port. If you’ve missed out on this gem, the Switch version is a great way to play it.

Originally released on iOS, PlayStation 4, Xbox One, and PC platforms The Sky Force games have been basically everywhere since 2004 when the original debuted on Symbian of all things. Since then they’ve made quite the name for themselves on iOS and Android as vertical scrolling shmups. If you’ve played any of the Raiden games or even Raptor: Call of the Shadows, you will be at home here. Sky Force Reloaded is a remake of the second Sky Force game that originally released on iOS with ports to PS4 and Xbox One later. It released on Switch on February 1.

Sky Force Reloaded on Switch is very good. The combination of 2D gameplay with 3D objects and some voxel based items and power ups seems like a blend of distinct styles waiting to go wrong but it works well and runs great. Some of the in game spoken commentary as you’re taking down loads of enemies and the rescuing people aspect reminds me of Resogun. Sky Force Reloaded isn’t the best shmup on the Switch but it is a very nice port of a good game. Frozenbyte is a studio most well known for the Trine franchise and they recently put out Has Been Heroes on everything around the time of the Nintendo Switch launch. After playing that I’ve been a fan and their newest title Nine Parchments is a very interesting take on a few genres blended together. If you’ve ever wanted a Harry Potter game but with a Diablo influence with some Magicka thrown in, Nine Parchments is the game for you. I’m a little hesitant to recommend it as a purchase for solo players but for playing with friends, this is a whole lot of fun.

While it had some quirks initially with save files, the Switch version has been recently patched and it is now a much better experience. It runs at native resolution both docked and the frame rate has been mostly steady at 30fps in my time with it. On the handheld, it looks great on the Switch screen but both modes suffer from some low resolution shadows. Given that the PS4 version is 1080p 60fps, I wasn’t really shocked to see this half the frame rate but what impressed me a lot is how well it runs and how good it looks on the Switch. There’s a demo you can check out for an idea of the performance but with the latest patch allowing for no save overwriting, Nine Parchments on Switch is an easy recommendation for a co-op game. As you’d expect from a game with Axiom Verge’s aesthetic, the Switch handles this MetroidVania title incredibly well. And for once, it doesn’t feel like a slight to call it one of those, because Thomas Happ’s game doesn’t just pay homage to Metroid Prime, it basically is one. From the art style to the way it plays, this game is exactly what the screenshots and videos make it look like, but it’s a very well made example. The combat is fast and, while not as precise as many will be used to, makes sense to add difficulty to the game.

It’s arguably best suited to Switch, too. It feels instantly the right way to play, and the fact you can suspend the console and just carry on lends well to the “room” based map. With interesting weapons, really it comes down to whether you played this one before, or are desperate to play again. If you’ve never tried it, this might be the perfect game to get, and as you slowly reveal more of the map, upgrading and trying new tools as you go, you might wish for more games in this ilk – I know I do.

A port that makes sense, then, and while I don’t love it as much as some people do, in a crowded Switch marketplace, given the fact that Nintendo didn’t put their Metroid 2 remake on Switch (I’m still waiting for that announcement, actually), it stands tall as a prime example of that vision brought into the modern era, while retaining what made it stand out in the first place. A fine game that is let down by the main character being a bit drab. This is the same version of the game, but on Switch. Make of that what you will.

Crypt of the Necrodancer Brace Yourself Games created something special with Crypt of the Necrodancer when it launched on PC platforms a few years ago. On paper it seemed like the perfect game for me because it was a roguelike and also a rhythm game to some extent. It also had a kickass score from Danny Baranovsky. Having put a ton of time into it on PC, I was glad to see it branch out to PlayStation platforms because it was finally portable. After that it was ported to Xbox One and iOS. In Japan, the release saw exclusive Shiren and Danganronpa characters and music added in and I ended up buying a digital Japanese copy on PS4 just for the Danganronpa content before it got added to all versions outside Japan. Now, the game comes to the Switch in the form of Crypt of the Necrodancer: Nintendo SWitch Edition bringing all DLC content and an exclusive playable character.

The console and mobile ports have been done by the amazing BlitWorks. BlitWorks is basically the Blupoint of indie games because their ports are always fantastic. Necrodancer on the Switch feels like a match made in heaven for a variety of reasons. BlitWorks’ port has no performance issues and the Switch Joy-con options allow for 2 player co-op on a single portable screen without any external hardware required. This release also comes with the Danganronpa and all other soundtracks and characters included from the get go. If I had to pick a fault with the release on Switch, the only thing and this is a stretch would be the icon isn’t as perfect as the rest of the release.

If you’ve never played Crypt of the Necrodancer, the Switch release is the definitive version without question.