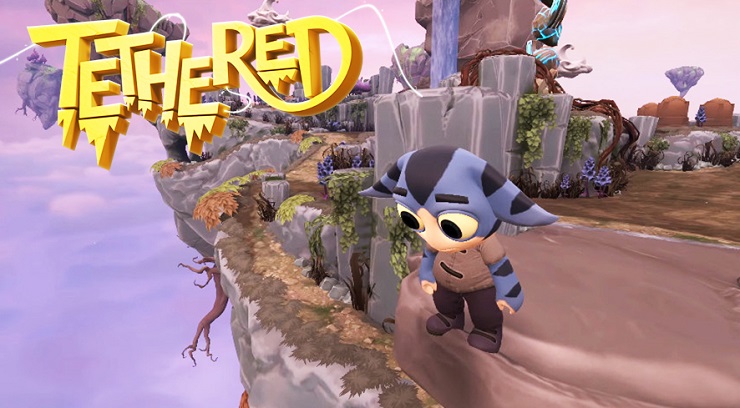 Strategy games seem to be finding a bit of an audience again on consoles, with Halo Wars 2 and the upcoming Valhalla Hills, but Secret Sorcery’s oddity Tethered may have passed you by when it was released on PS4 back in October. This is probably because it was a VR game, and most of you didn’t fancy shelling out upwards of £400 on a piece of kit that may or may not be a flash in the pan.

But hey, you can now play Tethered without owning Playstation VR, and it’s quite interesting how it emulates the VR experience on a regular ol’ television. First things first: the Dualshock 4’s motion sensor is the default setting for the camera, which I heartily recommend switching off. The idea behind it is great in theory, as even the menus are controlled by pointing the camera at each option, just as you would be expected to look at these things when using the VR headset. Using the motion sensor is meant to be the most responsive alternative to using the headset, but it’s way too finicky to use for any real length of time. If you do decide to switch off that function, using the right stick to look around is second nature to most of us now, I’d wager.

No matter how you play, the gameplay itself is, like I said earlier, is an oddity. You are tasked with building a community of Peeps, which you must hatch yourself when their eggs drop magically from the sky. You do this by sending a Peep to incubate it, but you only have a short window to get to each egg before they go bad. Building your community is much the same as any other strategy game’s building/resource-gathering loop, as you’ll send Peeps to cut down trees for wood, or mine for ore, even farming crops for food. But these resources are finite, which is where the ability to manipulate weather comes into play. Certain weather clouds appear in the sky at regular intervals, like wind or rain, and they have multiple uses. You can use wind to catapult Peeps quickly to their destination, rain to repopulate forests, or use sunlight to re-grow crops that have been all farmed out (or even to hatch eggs if there are no Peeps nearby). Mixing clouds together can produce new effects such as lightning, which can be used to destroy buildings so that you can use the plot for another construction, and it can even fry the monsters that come out at night.

Yes, Tethered is a game that involves combat. You wouldn’t think it, looking at its cute, almost Creatures-inspired visual style, but it’s there. Your Peeps will automatically defend themselves, but standard units will certainly be injured even if they survive their fights. Promoting units to warriors, or building defensive structures, can help to minimise casualties and keep your Peeps from losing morale.

Morale is both the best and worst part of Tethered’s gameplay, truth be told. The idea that your community can lose hope is an interesting one, with battle and famine obviously causing the biggest drops in individual Peeps’ morale, but in reality it isn’t as deep and thought-provoking as that. Most of the time, your units will lose morale simply because they have nothing to do, constantly prompting you to assign them tasks. This is fine, as it keeps you involved, constantly watching your Peeps. But let’s say they get into a fight during the night, dropping whatever they were doing to defend themselves. After the battle, they simply stand around, eventually crying out for your attention. They have no agency, no will of their own, and it quickly begins to feel like a chore to keep them alive. Remember the original Sims? When you’d constantly have to babysit them, because they couldn’t work out that going to the toilet was a necessity, or that leaving the oven on would cause a fire? That’s Tethered’s AI in a nutshell. At its heart, Tethered is a god sim, much like Black & White or Populous. It tries something a little different, bringing in elements of The Settlers and Kingdom: New Lands as you build your little communities and protect them from the dangers that come for them in the night. Each stage comes with its own challenges, from lack of resources to environmental obstacles, but the goal is to collect Spirit Energy from finding research books or vanquishing enemies, and many other means of course, in order to release the Guardian Spirit and complete the level. Strangely though, you don’t simply earn Spirit Energy, it appears as orbs that drift up from defeated creatures, etc. and you have to manually collect it by holding L1 while looking in its general direction. Considering it’s not always clear when you earn these orbs (there’s no distinct audio cue or on-screen prompt) and they often blend into the background, you can quite easily miss them, which delays progress unnecessarily. But Tethered is still a fun experience, and one that almost anyone can enjoy. It’s not entirely relaxing as god games can be, as sometimes it can get a bit overwhelming when you have Peeps crying out for you to wipe their arses or tie their shoelaces, all while being attacked by weird, oversized slugs. The controls are as simple as they can get in a strategy experience though, as you simply point at a Peep and hold R1, then release the button over the action you want them to perform, tethering them to that task. A little blue line denotes what they’re tethered to, so you don’t get lost or confused – except when your Peeps forget to continue their task, and you have to re-tether them to their job. You can periodically promote your Peeps to hero units, from warriors to farmers to miners, essentially improving their efficiency in the chosen field. They can still do any job, but farmers will cultivate food much quicker than regular Peeps, and warriors will deal/resist more damage in battle.

Building is also essential to your success, as you can gain more resources from fields than simple food plants. Taverns can keep morale up as folk like to unwind with a beer after a tough day, and temples will earn extra Spirit Energy from the various sources. More temples equals even more Spirit Energy, which is good for speedrunning levels, and placing higher on the online time leaderboards. That’s not essential to most, but it’s a nice bonus for anyone wanting to get the most out of Tethered’s thirteen levels.

As a god game, Tethered does a decent job of giving the player plenty to do, perhaps too much, with Peeps constantly requiring babysitting. But it’s still a decent success story, marrying together the styles of The Settlers, Kingdom: New Lands and Black & White to bring something a little different to the strategy market, especially on console.

Simple, intuitive controls
Plenty of levels, each with unique challenges

Strategy games may be a niche market on console, but Tethered genuinely has its heart in the right place. With a little more autonomy in its Peeps, it could have been a great game, instead of an above average one. Certainly a good choice if you want a lengthy VR game, though.