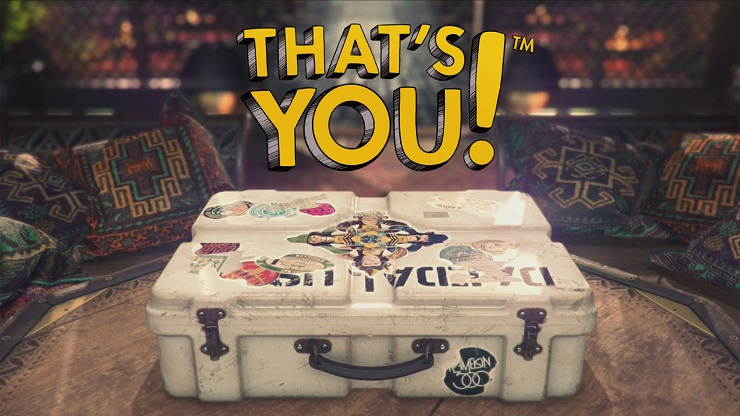 I’m constantly looking for fun video games to play, especially those that involve playing with your friends and family, and The Jackbox Party Pack is about as perfect as you can get, whether it’s 1, 2, or 3. They set the benchmark in not only fun party games, but the way they are played, using smartphones or tablets to write or draw depending on the game you’re playing. That’s You is a brand new party game by Wish Studios, and whilst it doesn’t have the longevity or variety as Jackbox, there’re some neat ideas to keep you occupied for an hour or two.

That’s You offers both local multiplayer and online, allowing up to six people (including yourself) to play a game that tests your knowledge about the people you’re playing with, which is why online seems redundant in that respect, as you’re never going to know anything about a stranger (unless by some bizarre coincidence, you’re paired with your Auntie Brenda). Before you start each game, you must pick one of a selection of cards to be your background image, then take a photo of yourself through your camera. There are different filters like the ability to stretch or squash your face, and even a kaleidoscope for a real crazy look. This was a lot of fun, and giving you the option to change your avatar throughout each game is great. I embarked on a quick burst of photos a la the post credits Austin Powers photoshoot in one game, much to my wife’s disapproval. Each game is made up of four tasks, including two questions, a drawing round, and a selfie round (which happened to be by far the funniest). The questions are centered around a choice of two answers, asking you a hypothetical question about who you’re playing with. There’s a filter you can turn on and off which is designed to hide the more embarrassing questions, but after plenty of games, I never felt like I couldn’t answer them regardless of having the filter activated. For example, you may get asked whether your friend would rather watch a gig in an underground dive, or a huge arena, or whether they’d stop a bank robber or cower behind a parked car. The drawing round has you using your phone to draw over a pre-existing image. This could be designing a baseball cap for a theme park, or drawing Halloween decorations on your doorstep. The responsiveness is impressive throughout every aspect of your That’s You, and after drawing, a quick swipe up of the image sends it straight to the game.

My favourite part of That’s You is easily the photo round. An image will pop up on screen featuring a face (not always a human face), and you need to mimic it through your camera. My wife has a beautiful face, but by God, can she contort it! I was in hysterics as we were asked to pose at a rock concert, look angry, and more, and every time I laughed uncontrollably. This is something Jackbox has never done, so it was a refreshing feature that made the game so great, especially as there is a wide variety of poses to imitate. As fun as each game was, it felt very short, and the space between each round took a while to progress. Like Jackbox, the worst part is the awful voiceover, trying to be funny when it just falls flat on its face. You’re not funny so please, stop forcing it! There’s not a lot of variety in the games, but there are a fair few questions to go through (over a thousand in total), and the designs of the levels are rather impressive. Theme parks, the wilderness, high school, the breakfast table, and a dive pub are just some of the locations of each round, and the detail in each one is surprisingly good. In fact, the design for the menus and the background cards are also great, opting for a 1960s hippy vibe, channeling the likes of Jimi Hendrix, and featuring a Fear and Loathing in Las Vegas aesthetic to boot. Even the music is psychedelic, adding to the overall vibe.

That’s You is a good game, but it can get old fast. It’s great for groups of friends, or just two people (turning into an interactive Mr and Mrs if you’re with your partner), but after an hour or two, the itch to whack Jackbox on gets harder to scratch. If there were more game modes included, this would be much more appealing, however, it’s still worth playing, giving you plenty of laughs along the way.

Not much variety
Short games
Voiceover is annoying

Whilst it may not be the best party game on the market, it's still fun for the time you'll spend playing it.

BPM: Bullets Per Minute console review
9.0
Back 4 Blood: How to unlock the other characters
Metroid Dread: How to beat the final boss
Metroid Dread: How to defeat the purple EMMI on Ferenia
Far Cry 6 | How to play co-op
How to transfer your Nintendo Switch data to the new OLED model
How to transfer your Death Stranding save file to Director’s Cut
Social Media
SUBSCRIBE
All content copyright GodisaGeek.com
Fonts by Google Fonts. Icons by Fontello. Full Credits here »
Posting....