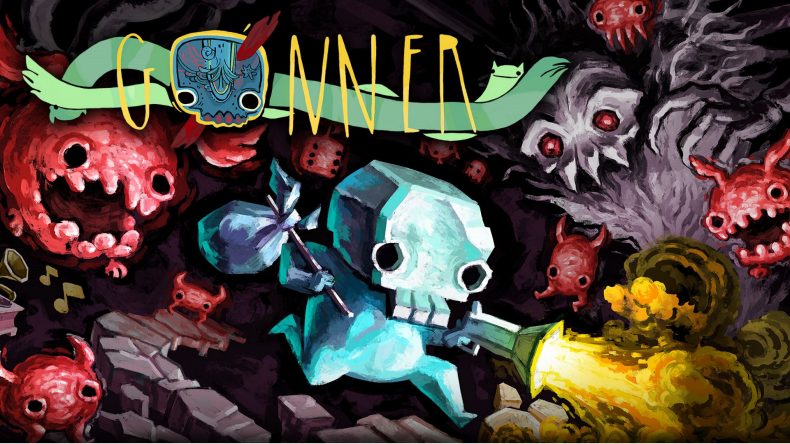 Ikk has one friend in the world, Sally, and she just so happens to be a giant blue whale. In GoNNER you take Ikk into the deepest, darkest recesses of the world he and Sally inhabit to find the best trinket he can in an effort to cheer her up. Of course, the generous path Ikk treads leads him to fight his way through a series of levels full of scary red monsters as he plumbs the depths for treasure.

GoNNER is another 2D procedurally generated rogue-like with an aesthetic that combines cute low-fi visuals with oppressive horror in the patterns of its levels and its monsters. There’s always a fear that strikes you when you come across a new enemy ‘What does this one do differently?’, ‘How can it hurt me?’, ‘Can it kill me?’; these are questions you will ask yourself constantly while playing because death follows you everywhere here, almost literally.

The enemies themselves aren’t really all that difficult, but the quantities and combinations of them can produce unforeseen challenges to the unprepared, and it’s easy to rush in headlong and wind up getting yourself killed due to an errant bounce or an enemy type that you overlooked. Knowing what can possibly happen causes you to slow down your approach, but GoNNER wants you to hurry, and rewards speedy play through a kill multiplier. Up in the right corner a series of heads floats, and every kill chalks one off, get five in quick succession and you earn a purple token which are used as currency, so, while you might want to be careful, a gung-ho approach is necessary to get anywhere. These purple tokens are used in the game’s shop which pops up before each boss offering you a set of different power-ups for you to consider switching your loadout, but they do cost money, offering another risk/reward scenario, because, it can be tempting to switch something out, but do you want to lose those purple tokens? If you have six of them then if you die you can continue. So, do you spend and hope you don’t die, or play it safe? I hope you have a penchant for dilemmas.

The issue here is that the game deliberately withholds almost all its rules from you. There’s a small section at the start where the game tells you how to jump and fire your gun, but after that you’re on your own. There are no tooltips for anything, so whenever you come across a new weapon, a head (yes, you switch heads to gain different effects on your energy and health) or a special ability you have no idea what they do until you have them.

This alone is considerably frustrating, as switching objects will remove your tokens, anything from one to three of them, but you don’t know what you’re going to get, so you could very well splurge out and wind up with a weapon that’s worse, for instance. The shop does let you try the weapon out and then change it back, if you wish, but the tokens are spent, and possibly that run-saving continue too. If you don’t, and you decide you don’t like what you’ve got for your run, after you die you’re given the opportunity to visit Death. In this monochrome area Death collects all the items you’ve come across on your runs, allowing you to configure your loadout from everything you’ve unlocked. One quick stroll and you’re back to your goal of dealing death for the cause of a trinket.

There’s a charm and grace to GoNNER’s gameplay that really hooks you. Dodging around enemies, the way popped monster bits cover the screen, the way gun fire can shift you around the area, the way the funny worm things smile as they swallow you down to the next level (oh yes, they poop you out when you reach the bottom too), and the music is delightfully bouncy, putting it at odds with the low-fi horror aesthetic permeating the levels and the monsters. It all adds up to keep you coming back again and again, more so than the high score chase. There’s a Daily Challenge as well, granting you access to powers you may not have managed to get your hands, but also enemies that you haven’t had the pleasure of meeting.

It stands to reason that if you liked the tough but fair brand of titles like Rogue Legacy or Spelunky then GoNNER might just be up your street as well. This is a game that wants you to work hard to get the most out of it, and absolutely refuses to lend a hand; like a parent who wants to toughen you up by turfing you out the minute you have a job. GoNNER hasn’t had as much of a spotlight on it as the current darlings of the genre but as far as constantly changing challenges go this is right up there with the very best.

Doesn’t tell you anything

Just a little bit of handholding wouldn’t have gone amiss, but spend some time working out what GoNNER is about and you’ll find a dark yet warm hearted bullet ballet.