previous
GoNNER Review
random
next
Black the Fall Review
1 like 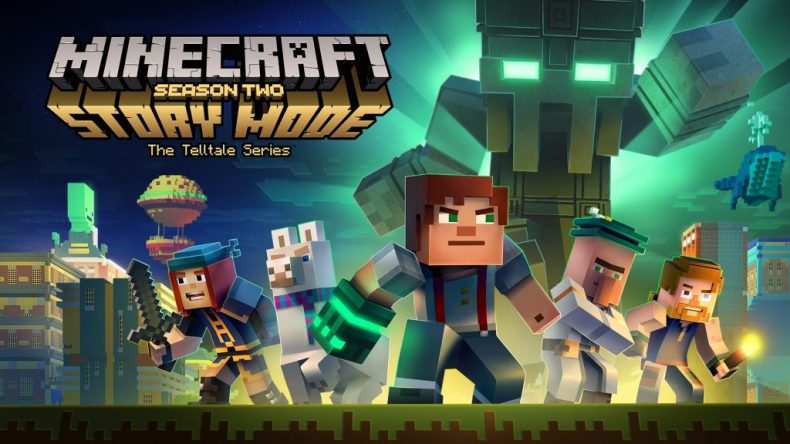 Minecraft Story mode returns with an episode that takes a while to get going, but ends with a promise that things might get interesting. It is a return to the same group of characters with some new additions, one in particular that I hope will feature more as the season progresses, and some cute little narrative techniques that serve to amuse and hopefully delight the intended young audience.

As this is season two you have the option to bring over your save game from the first season which will incorporate the choices you made throughout the eight episodes. It is a nice touch and ensures a little continuity between seasons, albeit a very light touch approach. If you don’t have a save file handy you can create a back story to flesh out your characters a little bit. I’ll admit that having this refresher at the start helped to bring these characters and their stories back to the forefront as I had forgotten a couple of the key choices I had made, and although the illusion of choice is always ready to be exposed in TellTale games, it was nice to have some of those decisions reflected back to me at the start of the game.

The first season of Minecraft: Story Mode started off strong with a good story about the threat of the Wither Storm, but over the course of the eight episodes and after the conclusion of the threat of the Wither Storm, things kind of got a little stale with self-contained stories that didn’t always hit the mark. It seems that with this episode the ideas, certainly at the beginning, seem to have dried up with a first half of the game being very slow. We are introduced again to Jesse, and his/her friends Axl and Olivia who featured heavily at the start of season one, only to never be seen again towards the end of the season. Sadly, these two are cast aside again very quickly which is an enormous waste of the vocal talent of the likes of Martha Plimpton in particular who plays Olivia, and makes me wonder why they even featured in the first place. Themes of friendship run deeply through Minecraft: Story Mode and this is continued with a small sub-plot between Jesse and Petra, the fearless adventurer that joins Jesse, Axl and Olivia at the start of season one. Things have become a little strained between Jesse and her, mainly down to Jesse’s new found responsibilities as the leader of Beacon Town. The story begins with knowledge that the town is to celebrate its foundation with a huge event, and walking around the town on the way to meet Petra, it is clear that Jesse is a big favourite with the townspeople. He is continually distracted by calls from the residents to judge their builds, or assist in the design. Within the town there is a repeat appearance of popular YouTubers, StampyCat and StacyPlays with mixed success. I say mixed success, because I find the presence of these two characters jarring, but they are a useful reminder that this series is not aimed at me, but rather the legion of young fans that Minecraft attracts.

The meandering around town and the subsequent meet up with Petra make for a very slow start to the story, and as it progresses, it almost feels like it wasn’t needed at all. Thankfully, once the main thrust of what this season will be about gets going the episode itself starts to pick up. We are introduced to a new character called Jack who is really funny, and made me chuckle several times during the latter chapters of the episode, and I hope that he will feature much more.

To make up for the slow start the end stages of the episode really ramp up with some interesting locations and an action packed finale. Quick Time Events are used extensively throughout the episode, from being chased by a swarm of cave spiders to dodging the attacks of the enemy at the end. In keeping with the intended audience of Minecraft: Story Mode these QTE events are very generous, with exception of one right at the end that has a ridiculously short time frame and resulted in me failing it a couple of times, which seemed at odds with the rest. There are some neat little narrative tricks in the story, with a sly reference to the idea of a mysterious being called “The Admin” who is responsible for all the structures that appear in the world. As well as repeated references to Lukas who is busy writing the story of the Order of the Stone. This meta-fiction technique amused me, and I would like to see if it continues throughout the season as it could lead to some interesting ideas being presented.

Season two adds in a new feature called Crowd Play that allows family and friends watching the game being played to partake in the choices made. This wasn’t something that I tried out, but I thought it was an interesting way to engage people in the story being told. There are also some changes that have been made to the points in the story where decisions lead to different branching narratives with a direct notification that the “story is changing” at that point. Choice has always been a bit of an illusion in Telltale Games, but it does serve to remind the player that there is some mileage in replaying to see what else happens.

Overall, Hero in Residence isn’t quite the start to season two I would have expected. The start is a little too plodding and pointless, however it does end very well. Jesse and his/her friends continue to be a likeable bunch with the voice acting throughout the episode consistently high. Some narrative quirks and an interesting new enemy means that episode two could be very interesting indeed.

Jack is very amusing
Ends on a cliffhanger

A slow start, but Hero in Residence ends on a high note with an interesting new enemy and a very funny new character.