The Cruel King and the Great Hero review 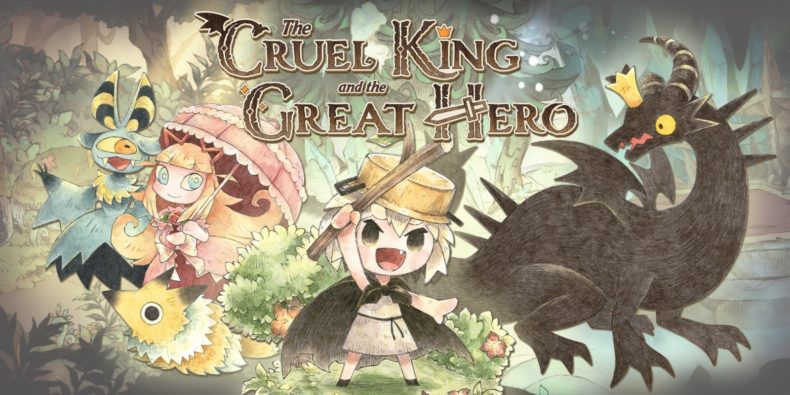 With so many games releasing every week, you simply have to do something to stand out from the crowd. This holds especially true for slower paced, lengthy titles like JRPGs. Time is such a precious commodity, and if you’re going to take away someone’s time they could be spending playing Elden Ring or Horizon Forbidden West you’d better be doing something worthwhile. Because of this it’s hard to recommend The Cruel King and the Great Hero, which does nothing particularly revolutionary and doesn’t really respect your time.

Our adorable young hero Yuu isn’t an ordinary little girl. Not only is she the daughter of the great hero who saved the land years ago, but after she passed away she was raised by a Dragon King. All her life she’s heard stories of her father’s adventures, and has been training to become a hero like him. With a pot on her head and a stick to wave around, the Dragon King decides she can go out into the big wide world as long as she’s careful. 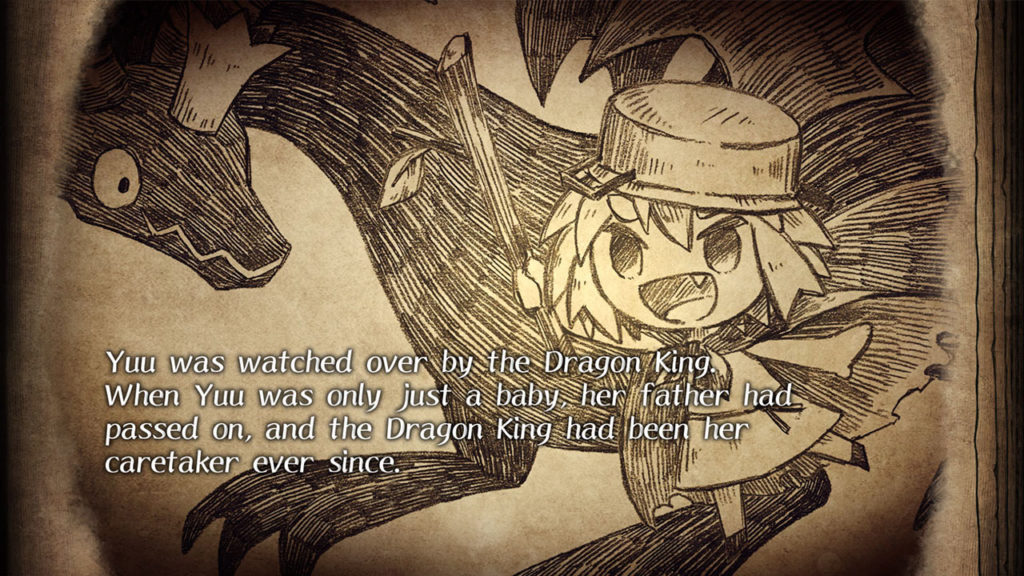 As soon as you set out on your hero’s journey you’ll see the best of what The Cruel King and the Great Hero has to offer, the visuals. The storybook style art is incredibly striking, whether you’re in a lush forest, a foreboding cave or a magical fountain world. The characters are just as gorgeous as the environments too, with adorable monsters that I often didn’t really want to kill.

But kill them you must, in a very traditional turn-based combat setting. It’d be fair to say that the battles in The Cruel King and the Great Hero are pretty tedious for the first hour or so. It takes Yuu a long time to get anything resembling a special move, so battles involve choosing to attack over and over again until someone is dead. Eventually you’ll unlock a few special abilities, so you can choose to do a more powerful attack or a faster attack if the situation calls for it.

The combat evolves a little from there, but honestly if you’ve played a JRPG before then nothing this game does will surprise you. There are buffs, status effects and temporary party members to manage, and plenty of levelling up to do. Different accessories can tweak a character to have different strengths, but you’ll probably never struggle enough in battle to need to sweat the small stuff. The latest abilities you get access to definitely spice up scraps the most, allowing you to deal damage in straight lines across enemies. Hitting three enemies at once with a shooting star is pretty satisfying. 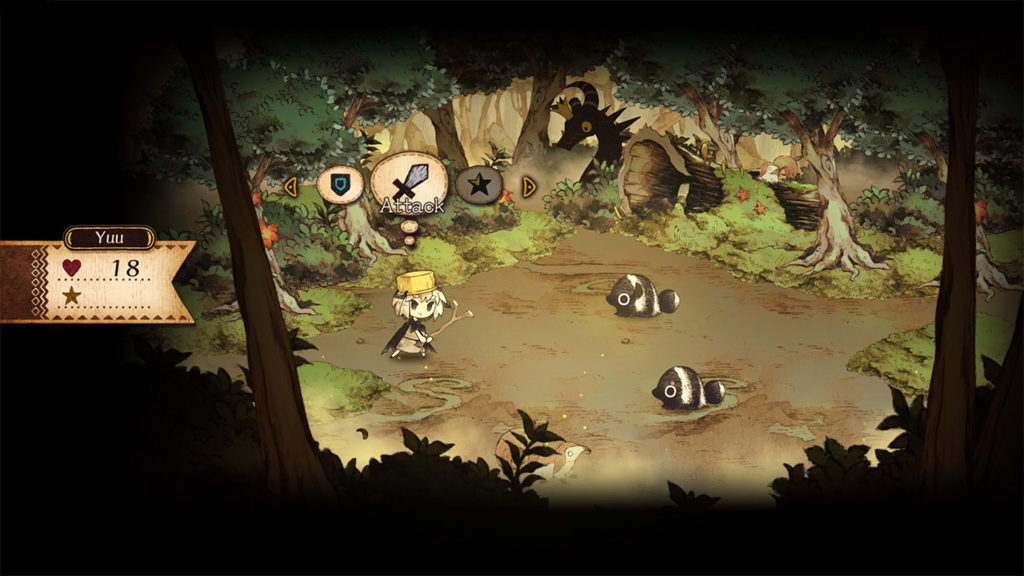 I’ve talked a lot about the turn-based combat here, and that’s is because you’ll spend most your time dealing with them. The Cruel King and the Great Hero has random battles, but the encounter rate is horrendous. Every area you’re walking through will trigger a fight every few steps you take, and getting from one side of the screen to the other can take a painfully long time. I have never played a JRPG with such painful and oppressive random encounters, and it very quickly sapped any chance of enjoying the game I had.

It feels like the developers knew that the random battles would be frustrating (to say the least) and because of that implemented a system to reduce them once you’re stronger than the enemies in the area. When you’ve hit a high enough level, you’ll be able to run through an area that has weaker enemies and will rarely have to fight any baddies. It’s a nice idea, but it takes so long to be a high enough level to do this that it’s too little too late.

Your main quest will see you wandering through new areas with occasional bosses to complete your hero training, but in each chapter of the game there are also a handful of side quests. These “good deeds” involve you helping out the monsters of the land with chores, and almost always involve you walking to a place you’ve already been and picking up an item for them. When coupled with the battles they are just another part of the game that feels like a massive slog, which is a shame as you unlock special points to spend on concept art when you complete them. 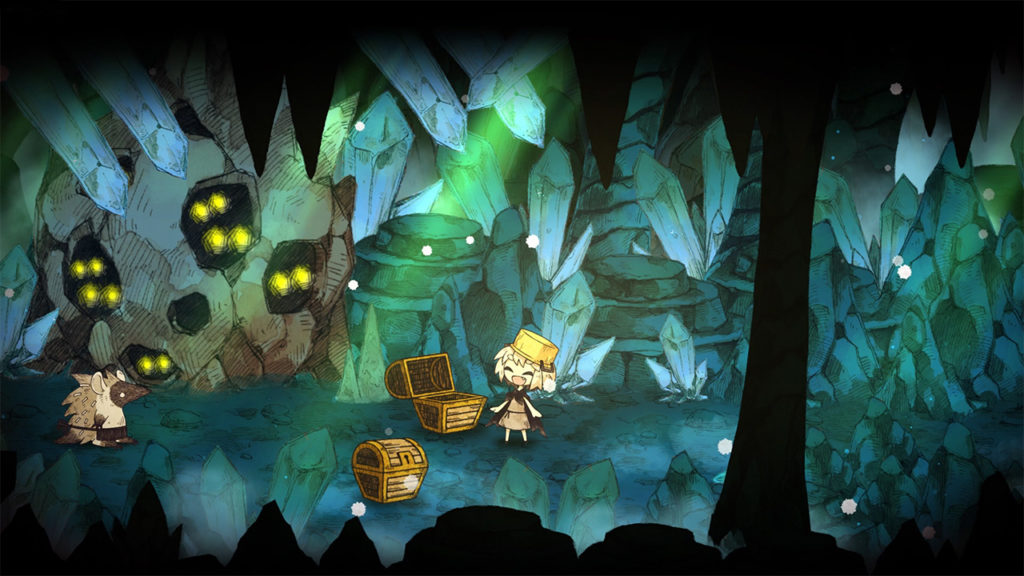 As much as it frustrated me, there are elements of The Cruel King and the Great Hero I do like. The story is light-hearted and twee, but actually has a few twists and turns that I appreciated. The relationship between Yuu and her adopted dragon daddy is incredibly heart-warming too. You’ll spot him in the background constantly keeping an eye on Yuu as she adventures, and he even secretly helps in combat. The first special move you learn is a flaming sword attack, which unbeknownst to Yuu is actually just the Dragon Lord breathing fire on her weapon as she raises it to attack. It’s very sweet.

It’s also worth bringing up the Switch performance of The Cruel King and the Great Hero. I didn’t think this pretty 2D RPG would have any issues on Switch, but there are multiple areas where the framerate takes a considerable hit. Obviously since it’s a turn-based JRPG it never has an impact on gameplay, but it’ll be an issue some don’t appreciate.

The Cruel King and the Great Hero is a gorgeous storybook JRPG that doesn’t do nearly enough to stand out from others in the genre. With a slow start and a ridiculously high count of random battles, it’s an eleven hour game with less than half of that being worth your time. The simplicity of the game might make it worth trying for someone new to the genre, but ultimately the pace is just too slow to recommend to everyone.

Gorgeous art style
Story is engaging if a little lighthearted

Random encounter rate is awful
Combat is basic, especially early on
Side quests are dull
Has some framerate issues on Switch

The Cruel King and the Great Hero is a gorgeous looking JRPG, but its slow pace and amount of random battles make it a painful experience.

The Witch and the Hundred Knight 2 Review

The Witch and the Hundred Knight 2 releases on March 30