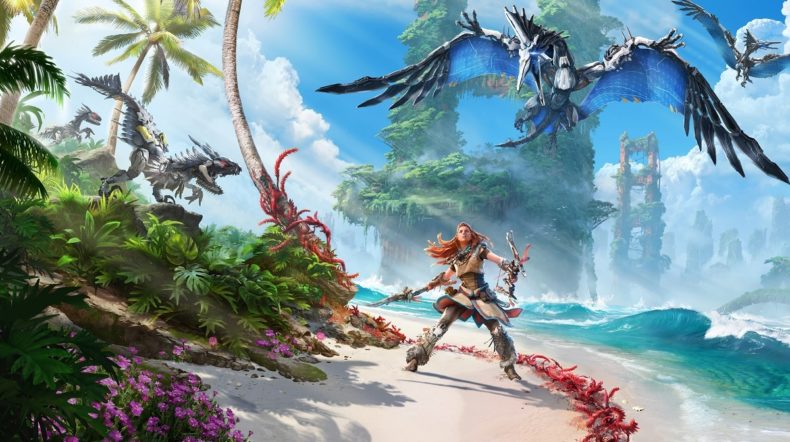 Four whole years have passed since Aloy’s last adventure. Ever since, the red-haired warrior has been a part of the gaming zeitgeist. She became a PlayStation icon, much like Nathan Drake, Ratchet & Clank, and Sackboy. She was a woman who was physically and mentally strong, showed great courage in the face of adversity, and saved the world which Guerrilla created. Horizon Zero Dawn was a masterpiece. To paraphrase Shakespeare, Aloy was the stage, and the men and women around her were merely players. With such a force of nature, it was inevitable there would be a sequel. Not only that, but the huge cliffhanger at the end of Zero Dawn screamed out for more. Horizon Forbidden West is not just a worthy sequel, it’s another triumph, and quite possibly Guerrilla’s magnum opus. 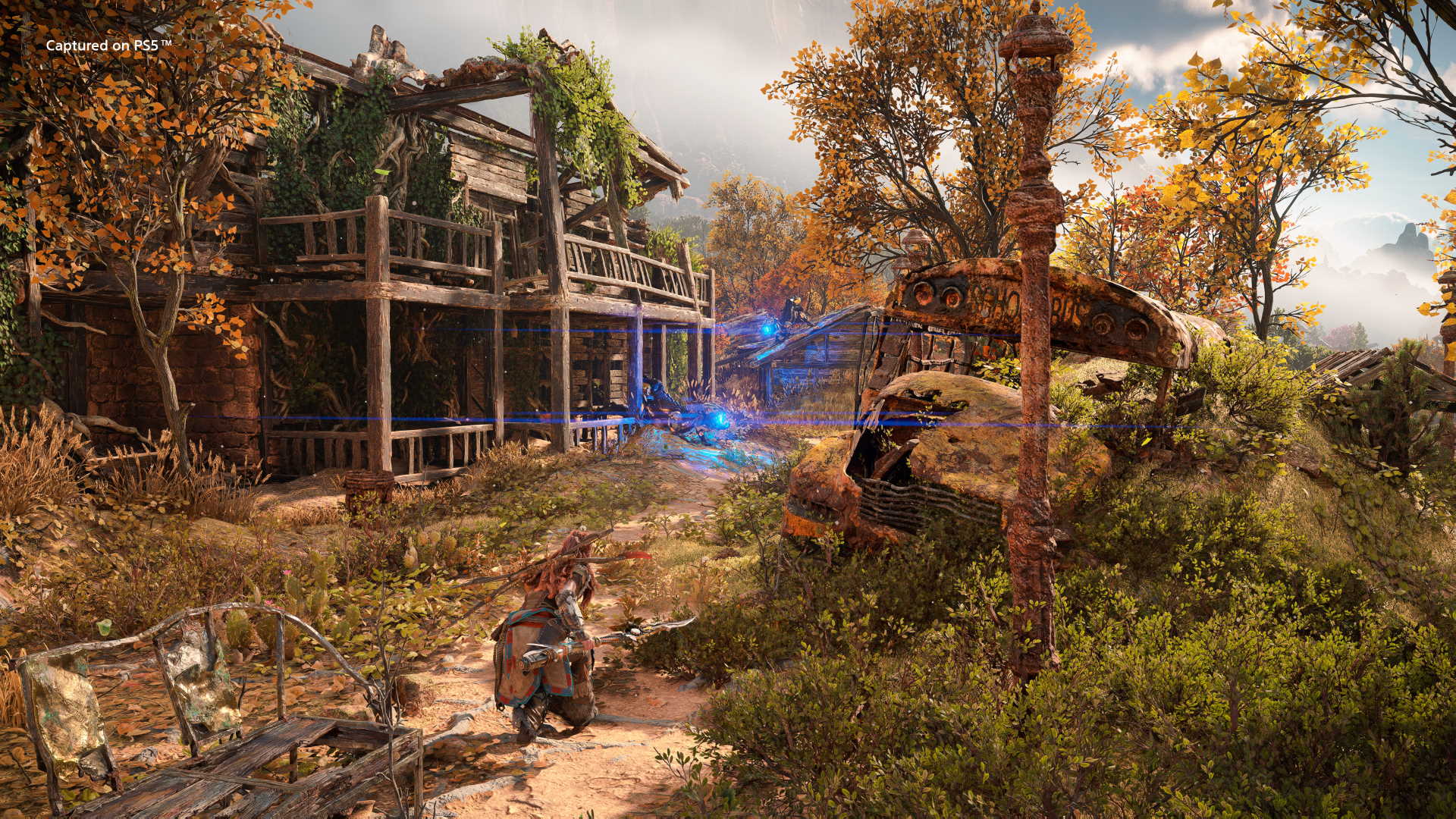 In every way, Horizon Forbidden West is superior to its predecessor. There’re new mechanics, tons of collectables and side quests, a dense and dynamic map, and more machines to fight and befriend. The story is also grander in every way, feeling much like The Empire Strikes Back did to A New Hope. Blight is ravaging the land, and a new threat is sending the world to the edge of extinction. Throughout the story, Aloy befriends new faces while working with old friends to stop the mysterious new enemy called the Zeniths. Sylens is back, and his mysterious post-credits scene from the prior game is explained. I thoroughly enjoyed Aloy’s journey in Forbidden West.

The new land is dangerous, filled with fierce weather systems and machines ready to rip you from limb to limb. Not only that, but people can be just as deadly. Thankfully, Aloy is more than equipped to try and save humanity. There’re tons of weapons that can be used to take out various enemies, all with specific elemental ammo for those particularly vulnerable, whether it be fire, frost, or acid. There’re a range of bows that do damage at short and long range, with some best used to tear off machine parts. The Boltcaster is a powerful weapon that fires bursts of ammo in quick succession, and the BlastSling fires bombs to great effect. Aloy still has the Tripcaster shocking enemies and knocking them down, as well as Ropecaster for tying machines up to allow for flurries of damage. 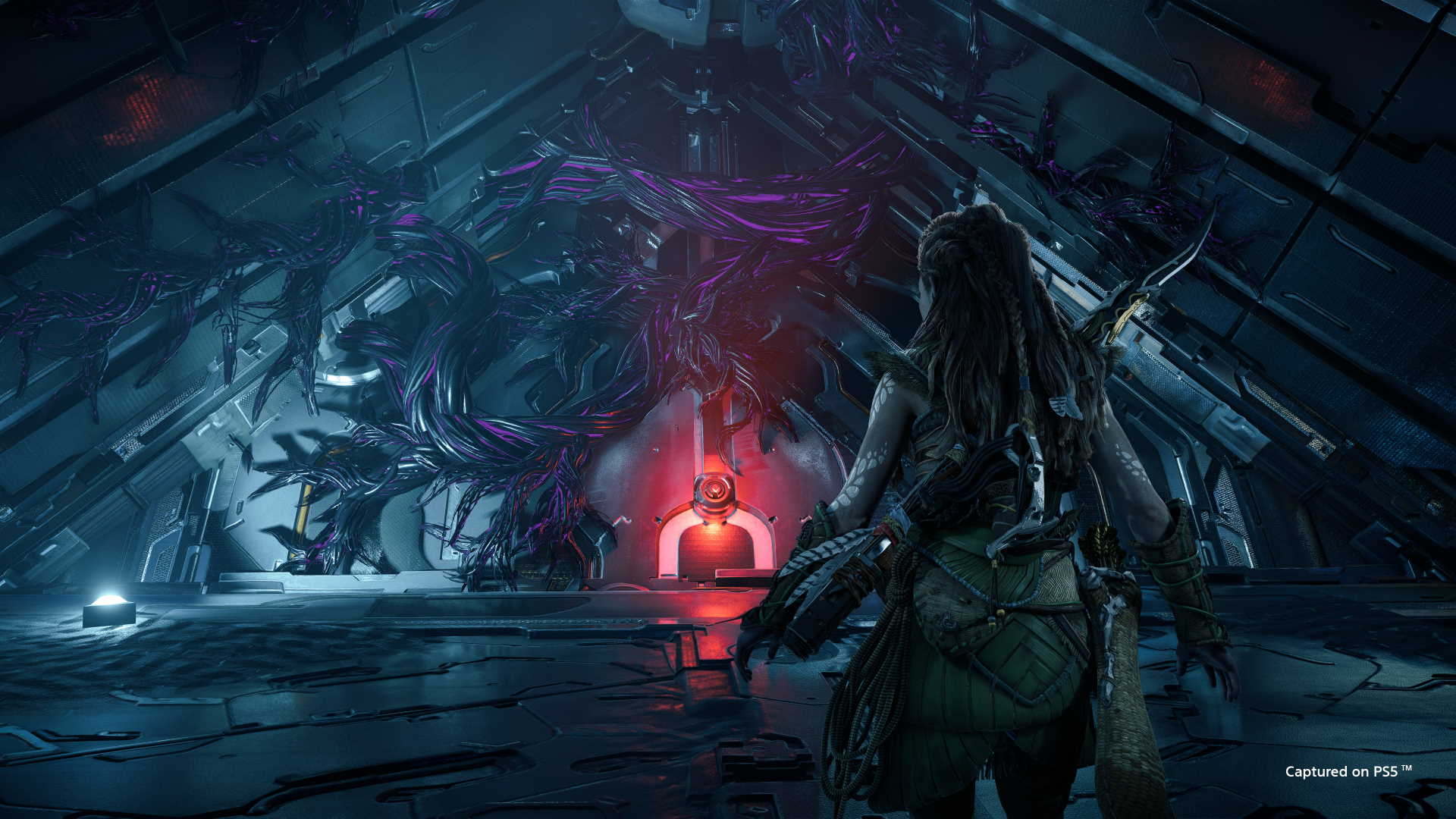 The spear is a masterful short range weapon for attacking enemies, and can deliver critical strikes and severe damage when used properly. New gadgets include the Shieldwing which is used for gliding from high places; the Diving Mask for swimming underwater without losing oxygen; the Igniter which destroys Firegleam and gets you into previously obstructed places; the Vinecutter that breaks down vines blocking entrances; and the Pullcaster allows you to grapple to higher points, pull machinery and platforms, and remove large amounts of rubble from blocked pathways. Horizon Forbidden West is filled with plenty of opportunities to make use of every piece of equipment.

Plenty of opportunities to strike

By defeating machines and killing other humans, the amount of craftable items can feel overwhelming. However, once you start to learn what parts are needed for what you want to buy or craft, there’s a satisfying flow to Horizon Forbidden West’s economy. By collecting machine parts, a visit to merchants across the map or workbenches let you craft new stuff, making your equipment better suited to deal with bigger threats. Metal Shards are the game’s currency, and can be used to spend how you wish, as well as repairing overridden machines. Coils and weaves can be equipped to weapons and outfits for added buffs to specific attacks or elemental specific gear. You can also use traps to great effect. 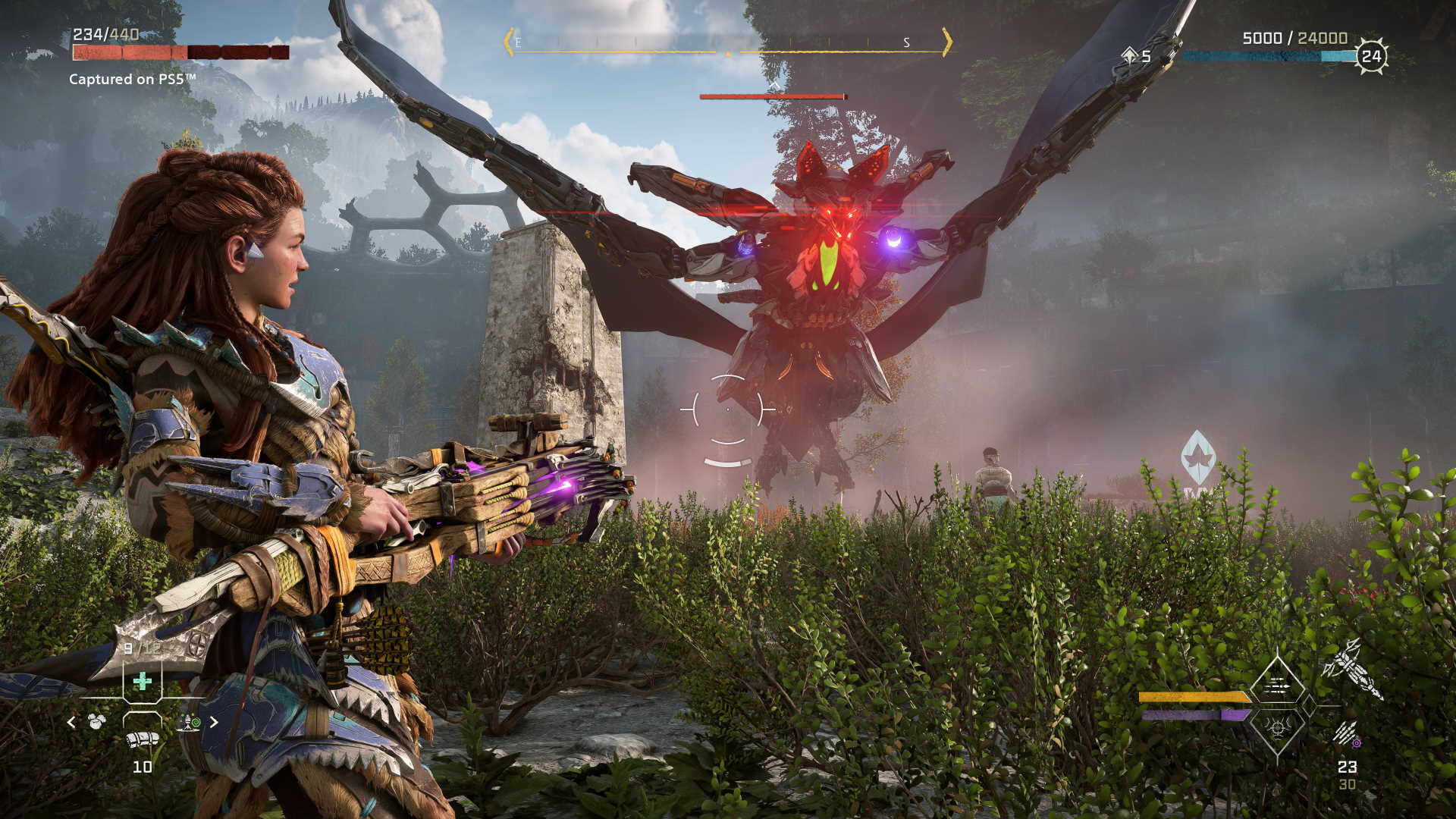 Each machine will be weak or strong to particular elements. You can also focus on particular parts so that they lose particular opportunities to attack. Shoot an acid arrow at one of the cannisters on a Brickleback’s lower back and it’s game over. Shoot a Burrower in the eye and it’ll go down instantly. When it comes to larger machines like the Tideripper, Slaughterspine, Thunderjaw, or Tremortusk, there’re still plenty of ways to weaken its defences. You need to make sure you study them, whether in battle or from a far. This is part of why I adore the machines of Horizon Forbidden West. They are expertly designed, and each one is completely different from the next. Not only that, machines can be overridden. Find all the Cauldrons and its core to ride them in the wild.

The map of Horizon Forbidden West is gigantic. Not only is it large, it is packed full of things to do. Relic Ruins hide orbs, and offer clever puzzles to solve. Rebel Camps and Outposts are filled with enemy clans to wipe out; Salvage Contracts let you find specific machine parts for a reward; Hunting Grounds and Melee Pits test your skills as a warrior; and finding all Tallnecks reveal more of the map’s secrets. There are Black Boxes and Vista Points to find that offer glimpses of the past; surveyor drones to take down; and so much more. Even the side quests are huge, with each one feeling more than just some generic fetch quest. Guerrilla has made sure everyone will have the option to spend hundreds of hours exploring the Forbidden West. 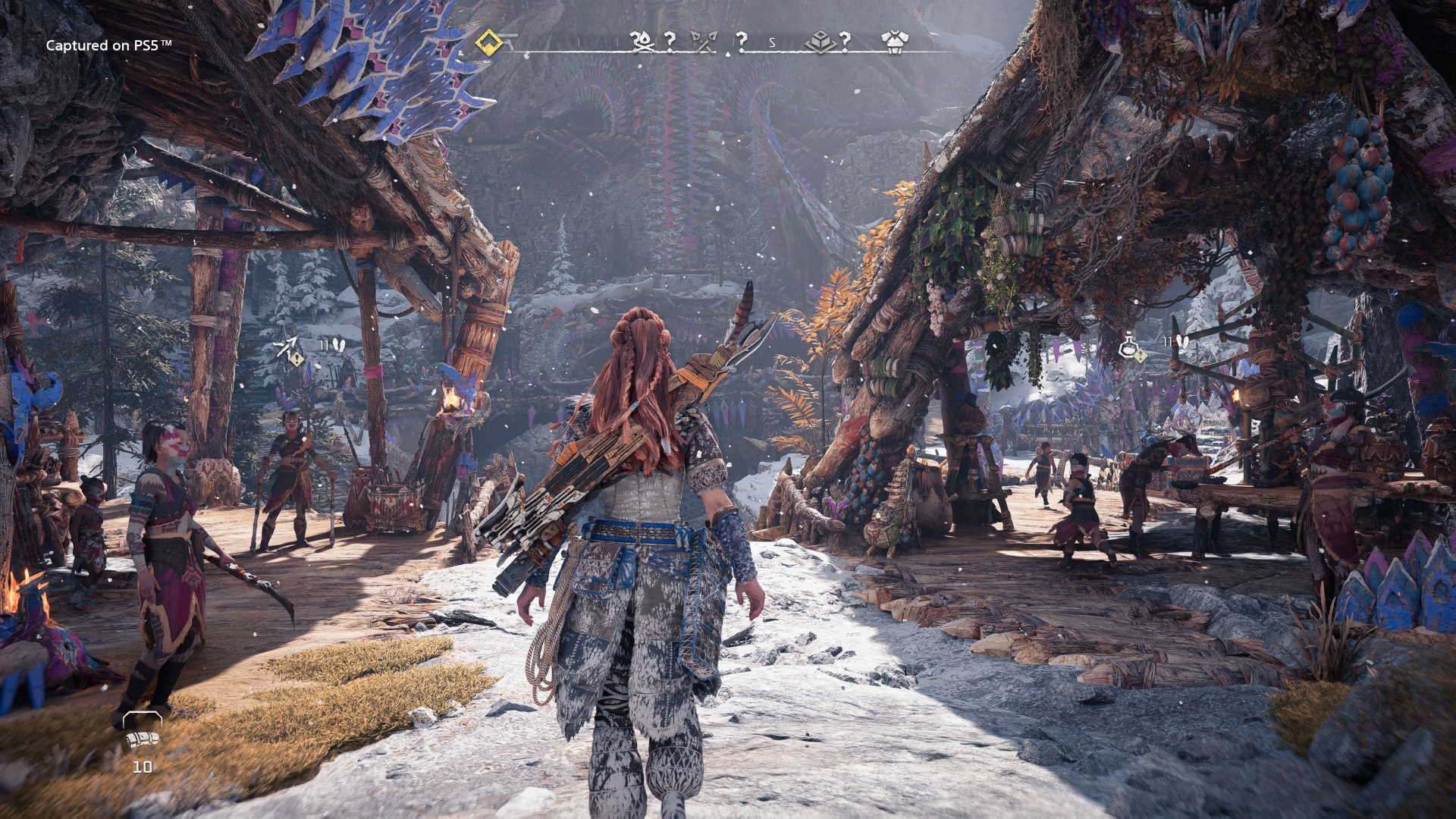 On PS5, Horizon Forbidden West is stunning. The frozen and dangerous mountains; the sandstorms in the desert; the sunny coastline; the swamps and jungles. Everywhere you go, the landscapes are remarkable. Every inch of the map has been given plenty of attention. It feels like a living, breathing world. I was in awe of the fantastic job done in making the world so alive. The way the machines exist in their own habitat is incredible. It’s hard to use words to do justice to how spectacular the various environments are. Character animations are equally impressive. Combined with the impressive acting on display, the entire experience will be one not easily forgettable.

Horizon Forbidden West is an enormous title that is filled to the brim with exciting missions and content. Combat consistently evolves, and the range of weapons and gear is staggering. The story is consistently engaging, and the characters are well-realised and thoroughly interesting. Aloy’s adventure is by far one of the most thrilling of this generation so far. She continues to be one of PlayStation’s most-beloved characters. Machines are perhaps the greatest part of the entire adventure. It’s fun to fight them, but also to watch them exist. They feel real. They feel alive. As much as I enjoyed taking them down, I found it highly satisfying to live among them. 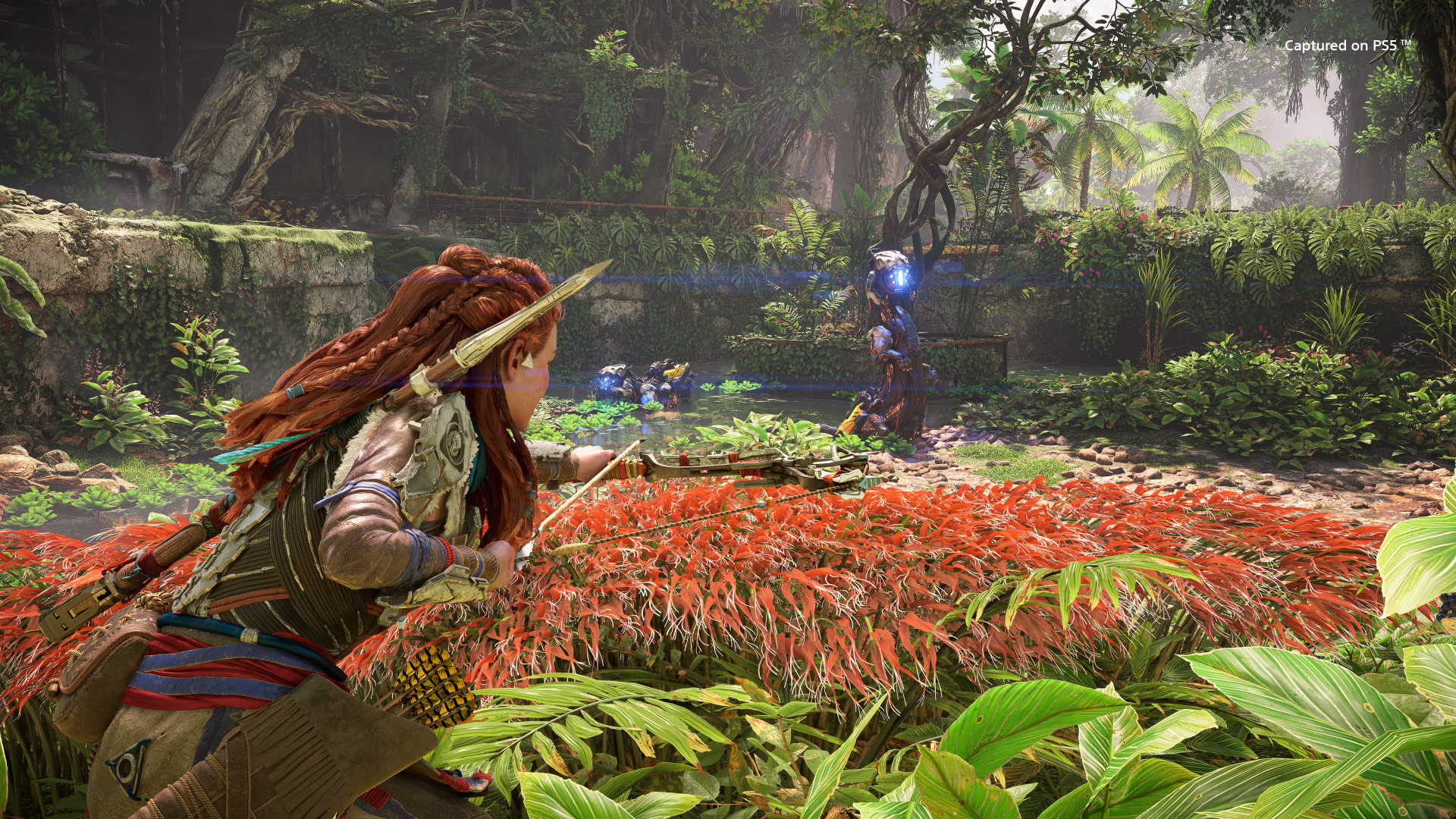 I’ve not seen a game look this spectacular before. From the various biomes and how their ecosystems work, to the vibrancy of the world and how NPCs all go about their daily lives, Horizon Forbidden West is another blockbuster. Bigger than the original in every way, I honestly can’t fault the stunning work Guerrilla Games has done in bringing the next chapter in Aloy’s story to the PlayStation 5. There isn’t a doubt in my mind it’ll be discussed in great detail come end of year discussions for GOTY. All that’s left for me to say is make sure you put time aside to play one of the greatest single player games of all time.

Horizon Forbidden West is a masterpiece. With a gripping story and a world ripe for exploration, you won't be disappointed.