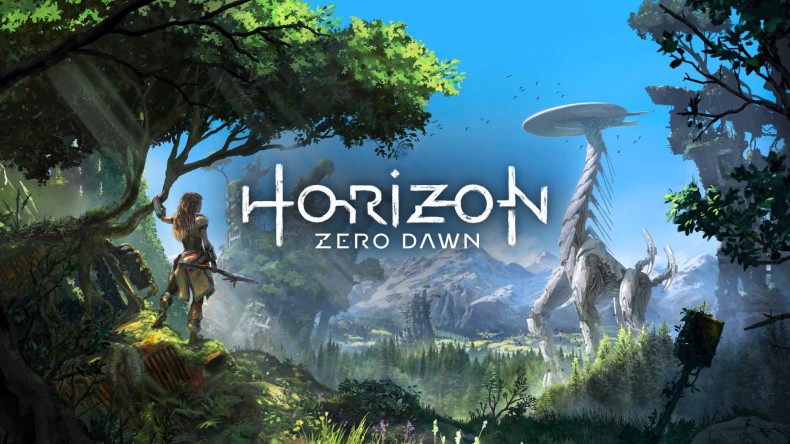 It’s rare for a game to have so many facets of brilliance without any sacrifices along the way. Nothing about Horizon Zero Dawn is weak, everything has been built with the utmost care, and there was never a moment when playing I considered to be filler and unnecessary. Guerilla has crafted something special, and all the hype has been completely justified.

Right from the opening cinematics, you’re blown away by how much work has gone into the way it looks. The way the leaves blow in the wind, the blanket of light on the side of a mountain or the glint of sunshine on a vast lake is breathtaking. As you play, the visuals never fail to impress, and throughout the game performance never suffers, even when you’re running away from a herd of Broadheads, or a gang of angry Carja as a couple of Corruptors try and blow you to kingdom come.

Dynamic weather systems change all the time, and all of the various biomes make for some stunning scenery. You’re always left smiling and never grow tired of seeing the red clouds, snowfalls, thunderstorms, or serene and sunny days throughout the world of Horizon Zero Dawn. You could walk from one end of the map to another with zero load times and not a single performance issue – it’s technically sound. The story is full of big reveals, loud and exciting showdowns, and moments of awe. You play as Aloy, growing from an Outcast to a fearsome warrior trying to stop corrupted machines and a mysterious group called The Eclipse from destroying everything you hold dear. You’re also trying to find out what the hell Zero Dawn is, and who your mother is. There’s a personal tale at the core of a bigger picture, and everything fits together wonderfully. Some moments are genuinely moving, and others will make your jaw drop to the floor.

As a protagonist, Aloy is a strong, smart woman with a great head on her shoulders. You’ll be able to make some choices in conversations to build the personality you want her to have, but it never feels like you need to. She’s a caring, kind person, and being mean or blunt whilst in conversation feels wrong. It’s not just her character that makes Aloy great; whether you’re traversing the various landscapes, climbing up mountainsides, or taking down a Watcher or two, the control system is wonderful. There’s plenty going on at times and after some initial tutorials you’ll be switching weapons and overriding animals with ease. The heart of combat consists of choosing between four weapons at a time (all can be switched in the inventory menu) to get the advantage, dodging out of the way, or using traps to give you an edge. Sometimes you’re fighting to kill and other times you’re doing so to shred machines for spare parts, but each target is different and you have to plan accordingly. Human enemies can be taken out with an arrow, but the further you get, the more they have new variables like flamethrowers and sniper rifles, so making sure you have different types of bows mean you can have different types of arrows.

When taking out the machines, you’ll be tested a lot more, and everything in your arsenal will need to be used for great results. Each machine, whether a Snapmaw (crocodile-type machine) or a Deathbringer (you don’t even want to know), will have weaknesses. Some are susceptible to fire, some to ice, and others to electricity – shock. Depending on what bow you have equipped, your arrows can dish out more damage, tear away armour, or reign fire down; when an enemy is vulnerable (usually from burning, freezing, or a state of shock), you can run in and use melee to thrash them with your spear.

Along with the bow, you can use a sling to launch bombs and cause suitable amounts of damage, but using the ropecaster and the tripcaster in combat is where Horizon Zero Dawn really shines. Some of the biggest machines you have to face can be too big to take down with a few standard arrows. Using the ropecaster helps to pin down your target, and those ropes only fail once you’ve caused a lot of damage. The tripcaster fires a tripwire to shock and stabilize for a few seconds, letting you either get close or fire weapons with a bit of breathing room. Not all encounters or missions require you to go in guns blazing (there is actually a gun you can use if you want), and stealth is also a key element. Aloy wears a small item near her ear called a Focus, and it allows you to scan machines and humans for weak spots, track a target’s path, and also tag them to make it easier to locate. One of the skills you can unlock early on is Silent Strike, and this helps to stealth kill. There’s a lot of tall grass you can hide in, and catching your enemy’s attention by whistling can get them to come over. It can be pretty easy to use stealth for the most part, but certain machines can still scan tall grass, so you’re not always guaranteed a quiet life.

Progressing through the game will allow you to upgrade skills from three different categories: Prosper, Brave, and Forager. Each one has specific skills to increase (by gaining XP), and some can really give you the upper hand, like the ability to scavenge better equipment or fire three arrows at once.

Crafting is a massive part of surviving and progressing, with the need to do so a constant throughout. You’ll run past Ridgewood all the time, and you’ll collect shards from almost everything. Rarer stuff like echo shells can be trickier to gather, but collecting everything is vital to keep yourself alive. Picking up medicinal plants fills up a gauge in the top right of your HUD, and by pressing up on the D-pad fills up your health. One of the smartest features is the ability to create errands, essentially custom quests you create to go out and find a specific item you need for crafting.

It’s easily one of the cleverest games you’ll ever play, and even in the littlest detail you’ll be left amazed. Watching various packs of machines act completely different to another is magical – I stood and watched as a pack of Sawtooths were attacked by a Stormbird from the sky, and I also remember running across one of the plains as a herd of Striders dashed right past me. This is a robot safari and you’re cordially invited to hunt, fight, or just observe.

Horizon Zero Dawn makes sure you’ll never forget it: the combat system is superb, the story and mission structure never leaves you bored, and the design of not only the world, but the way the machines exist is exquisite. There are side quests, hunting grounds (timed missions to earn rewards), bandit camps to clear, Cauldrons (high tech caves that eventually let you override more machines to use as rides) and actual moving outposts in the form of the giraffe-like Tallnecks. There’s so much to enjoy, and you’re never going to run out of cool stuff to do. The Carja AI is a little poor at times (if you see a dead body, making a song and dance about it!), and the GPS waypoint system can be misleading, but these are minor issues. This game is damn near perfect, and you’re going to absolutely love it.

It’s been a long time since a game has been put together this well. The combat is awesome, the visuals are stunning, and Aloy is 100% badass. Go and buy this game!