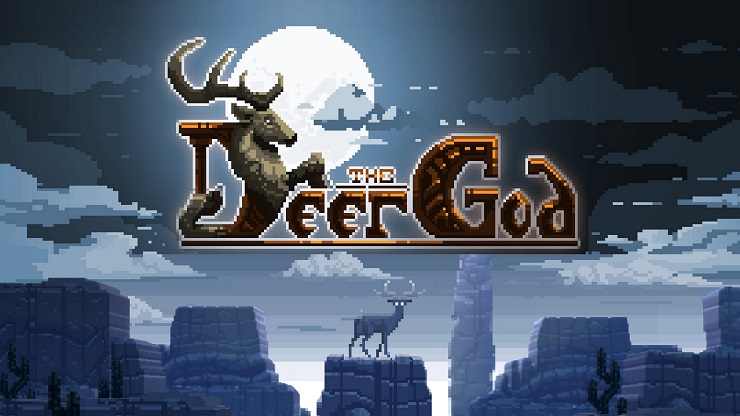 Listen, this isn’t a precise sniper shot aiming to only take out The Deer God, no. It’s more of a shotgun blast, trying to take out as much as possible. The Dear God, unfortunately, was just the straw that broke the camel’s back. I’m so, so, so tired of games that look like really fun, fast paced platformers in trailers, but then end up being nothing like that at all – and The Deer God is yet another example of these types of games that may very well look pretty, but offer very little in substance.

You start The Deer God as a hunter sat at the campfire with a mate when, suddenly, The Deer God comes forth and says you must redeem yourself and then hey presto you’re now a wee little deer. Now as a deer what you have to do is just run to the right and keep running forever. Jump over obstacles, avoid the vicious creatures of the wilderness and, occasionally, solve strange puzzles which seem to offer very little. The platforming is very rudimentary, doesn’t feel particularly good to play and isn’t satisfying.

In order to survive you must eat fruit and nuts to stay full, and avoid the attacks of critters such as foxes, porcupines, eagles and weird monkey things. If either the hunger or health bar go empty then the poor little deer will perish and will be then sent back somewhere random, which seemed to change with every death without rhyme or reason. Eventually I began to feel like I was lost, walking in circles, somehow always coming across recognisable landmarks despite only every going in one direction. If that was the point, well, fair do, but it left me frustrated and wondering about the futility of even playing.

There is a little bit of depth to the game. You will occasionally find people you can talk to (enemies can still attack you even if you’re locked in a conversation) and solve little puzzles for them to earn an award. Items, such as bouncy mushrooms and anti gravity stars, can be used to help you avoid enemies and deadly chasms, too. The Deer God is also quite pretty. Its pixel art is colourful and the way it uses the background and foreground, with subtle camera movements, really show it off. Its cold blue nights where danger is difficult to see are hard to navigate, but the promise of the blooming, soothing orange sun rises make you fight through another day. Yet despite the nice looks, there is very little atmosphere. The music, when it is being played, is alright, but there are long stretches of play when there isn’t any music and in these gaps there is no noticeable diegetic sounds that give this strange and endless plain any sense of life. No birds tweeting, no crickets chirping, no crackling flames, no rushing water or the hooting of owls. The only sounds I can remember are the riberting of annoying frogs. Most of the time there is only silence, and that’s rather boring.

Ultimately, The Deer God’s biggest sin is that it just feels utterly pointless. There is no emotional reason for me to play, and the gameplay is so benign and fruitless that it just made me wonder why I still held the controller in my hand. It may be trying to convey some important message about nature of survival, but it’s nowhere near engaging enough to be noticed.

The Deer God is a 2D platformer that aside from pretty looks offers next to no substance and isn’t engaging at all.

The Deer God and Infinite Boredom