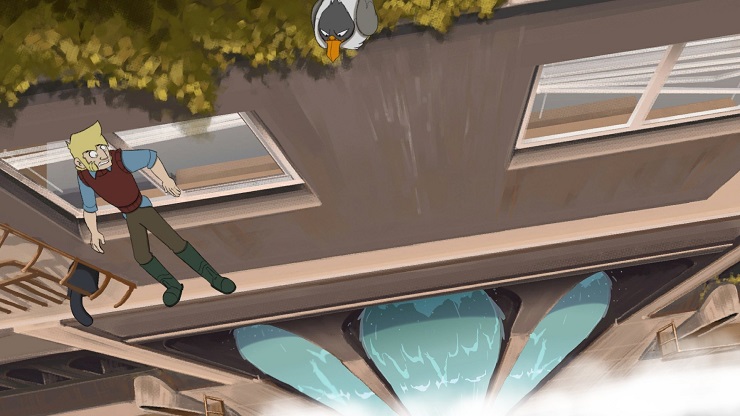 It’s been a while since I played a new point-and-click adventure game, and that makes me sad. Broken Sword is one of my favourite series ever, and the genre seems to have disappeared into oblivion. Secrets of Monkey Island, Day of the Tentacle and Grim Fandango can all be played on modern consoles, but where are the new adventures – the new ideas? Pewter Games – a small studio in Dublin (with the co-founder of Revolution Studios and Broken Sword creator Charles Cecil on board as Executive Producer), has decided to make their debut title something that embraces the legacy of the genre and freshens it up a bit. The Little Acre has some of the loveliest hand-drawn artwork I’ve seen, and the puzzles are tough, but rewarding; unfortunately, by the time you’ve started to get into the flow of things, it ends rather bluntly, leaving you a bit unsatisfied with the outcome.

In 1950s Dublin, you start off playing as Aidan, asleep in the loft of your countryside abode next to Dougal, your dog, and Lily, your mischievous and adventurous daughter (whom you later get the option to play as aswell). You have no idea where your father has gone, and it isn’t long before you’re transported to the mysterious world of Clonfira to investigate what happened to him. The story has a tender union of humour and emotion, bringing the innocence and reckless abandon of youth together with the worry and love a parent feels for his children wonderfully; you can be smiling one minute and crying the next. The only disappointment comes in the final minutes, when you’re left wondering why the ending felt so rushed, and why so many questions were left unanswered.

The Little Acre is gorgeous, with some of the nicest animation in recent years; the countryside of Dublin and the mystery of Clonfira are very different in tone, but the detail and design are reminiscent of some of my favourite animators. Clonfira looks like a Don Bluth take on Alice in Wonderland, whilst the whole game has a Studio Ghibli and Cartoon Saloon glow. Some of the layering of scenes shows great level design, such as the fields in the background, and the backyard of your house; as you walk to the shed; both scenes move separately to each other and give a great sense of scale.

Your house is messy – like houses are when you have kids, and each room is chockfull of clothes, toys and stuff that needs to be washed. Some of your father’s inventions litter the house, and they become the key to solving his disappearance. Clonfira is a dark, magical land full of weird creatures both friendly and hostile, including a Disneyesque creature called Bugsy. The viewpoint chances to an isometric one whenever you visit, and it helps to separate the two worlds. It’s also a nice idea because it allows the developers to showcase their imagination and creative flare a bit more. Much like the story, you’ve only dipped your toes into the wonders of Clonfira before you say goodbye, and its charm and endless possibilities are taken away from you much sooner than you’d like.

The Little Acre features plenty of puzzles, and every single one challenges your logic. They’re relentless too; more or less every minute you’re introduced to a brand new one and some can really push your buttons. Most rely on you using items you’ve collected along the way, so it’s worth exploring every nook and cranny. The grand thing is, they’re so satisfying, and your frustration with the game turns to you because you realise how obvious they are. Logic and common sense is the key to every puzzle, and once that notion twigs, the beauty of the gameplay becomes obvious and endearing. If you really do struggle, you can press a button to bring a drop down menu, and by looking at your notes, you can ask for a hint or even the solution when things get too frustrating. Everything about The Little Acre feels comforting, and you’re welcomed into this world with a sweet and sentimental story, intertwined with a bounty of headscratchers and stunning artwork. Other than the abrupt ending, walking around can be really slow which can get annoying if you’re constantly pacing around your damn house looking for that bloody water jug. The characters are interesting, but there’s not enough development, and the mystery of your father never really seems to be explained, despite finding out what happened, and the villain of The Little Acre only has his motives touched upon briefly, not giving you enough to feel any real resentment towards.

Despite these few issues, I’ve not played anything for a while that made me feel warm and fuzzy inside, and having a daughter myself made Aidan’s love for Lily authentic and enthralling to watch. It may not be a long game, but there are some really nice touches and not only is the artwork stunning, I’ve not heard such a gorgeous musical score that adapts and interacts with the story as much as you do.

If you miss the point-and-click adventures of old, or just love a heart-warming story filled with some great characters, this tale of love and loss is for you.

The Little Acre could be an adventure of a lifetime