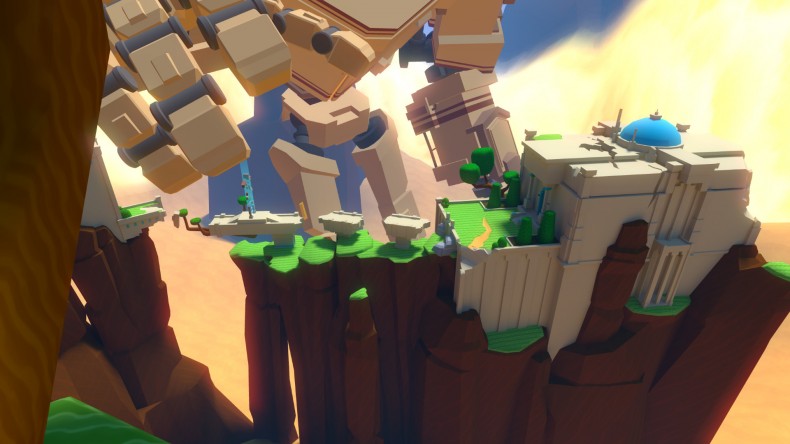 Windlands has the honour of being the very first PSVR game to make me need to lie down for fear of getting sick. Being the VR master that I obviously am I thrust myself into Psytec’s world with all of the provided comfort settings switched off. Segmented turning for beginners? Not for me, pal. Disable strafing so I can ease myself into proceedings? No thanks, mate, I’m a professional. A comfort cage to help me get my VR legs a bit? Listen, I’m an animal, I was born to swin… actually, yeah, I’m gonna need a wee lie down for a second here, chief.

Windlands tells the tale of a lost civilisation, once a mighty empire, whose cities and towers were built with a mysterious power gained from sacred crystals, crystals which have now been smashed to pieces and scattered across the ruins of three regions – and it’s up to you, guardian, to go get them back.

In order to do this you’ll need to make use of a set of hooks for grappling, or grappling hooks as they’re commonly known, to attach yourself to objects as you swing around levels looking for crystal shards and broken tablets to piece together the very slight story and unlock progression across the three stages on offer. Upon gaining control of your character, Windlands is an immediately exciting prospect; levels are huge and colourful and veer off in multiple directions into the distance in front of you, seemingly massive playgrounds for you to swing and parkour (the game’s bold description for very basic jumping/wall-jumping) around at your leisure.

However, it quickly becomes apparent that Windlands can’t live up to its promise for a variety of reasons. Firstly, traversal, the very thing the game is built around and the one thing it really needed to nail, just isn’t really any fun. The first couple of times you grapple a bush or wall and swing across a chasm it’s kinda exciting but then you get to a tricky section or try to get yourself somewhere specific and realise that it’s just not very responsive, it feels sloppy and you’ll spend a lot of time dangling off bushes trying desperately to figure out how to gain enough momentum to move on. You’ll also feel like smashing your controller, or at least I did, when you fail to make a straightforward jump between two simple ledges for the 100th time because the distance you cover with a jump as well as the distance you travel when you land seems so random.

It says a lot about the traversal system in Windlands that it’s at its very best as a game when played on Easy Mode, and I honestly don’t think I can remember another game I’ve played where that’s the case. On the easiest setting you can grapple any object you want to help propel you along, whereas higher difficulties restrict you to greenery only. I initially started playing on normal mode and spent a ridiculous amount of time screaming into my headset because I kept losing all my forward momentum crashing into trees, falling off ledges and dangling hopelessly out of bushes like Peter Parker after a massive bong. It doesn’t feel like a system that grows on you or one that you can learn to master; it feels half-assed. Another problem with Windlands, ignoring the weak story, is that the three areas you play in across the course of the game, Jungle, City and Sky, are all practically identical bar the fact they’re slightly different colours. I could probably live with this if they weren’t also so empty. Beyond grappling from tree to tree and picking up a crystal or tablet here and there, there’s nothing else to see or do. There are no enemies, no threats and the gameplay doesn’t evolve from what you’re presented with in the opening couple of minutes, which again would be fine if the system of traversal had any depth or finesse to it whatsoever.

Having said all of this, it’s true that Windlands is at least an actual game, not a tech demo or a PSVR “experience”. It has a start, middle and end, a story of sorts and enough hours to muddle through that, if it’s your kind of game, you’ll feel like you got your money’s worth. At £18.99 it’s also not nearly as expensive as other, much worse, VR games that I’ve played on Sony’s device (I’m talking about you Robinson: The Journey). Psytec must also be commended for the comprehensive comfort settings they’ve provided. Windlands allows you to swing, jump and (mostly) plummet massive distances very quickly and, if you’re not an idiot like me who ignores all of the provided warnings on account of testosterone, you’ll find the game has some combination of settings which allows you to do all of this comfortably and without the need to lie in a darkened room for a couple of hours afterwards.

Overall, Windlands is a pretty great idea that could have been an essential PSVR title had more thought been put into its traversal. With a much more precise means of movement married to interesting levels designed to encourage experimentation and mastery of parkour and grappling techniques, this could have been a wonderful playground to learn and get lost in; as it is it’s a disappointing, bland and frustrating experience with very little sense of progression or reward.

Large, colourful levels
Plenty of comfort settings for those new to VR

Windlands is a pretty great idea that could have been an essential PSVR title had more thought been put into its traversal.