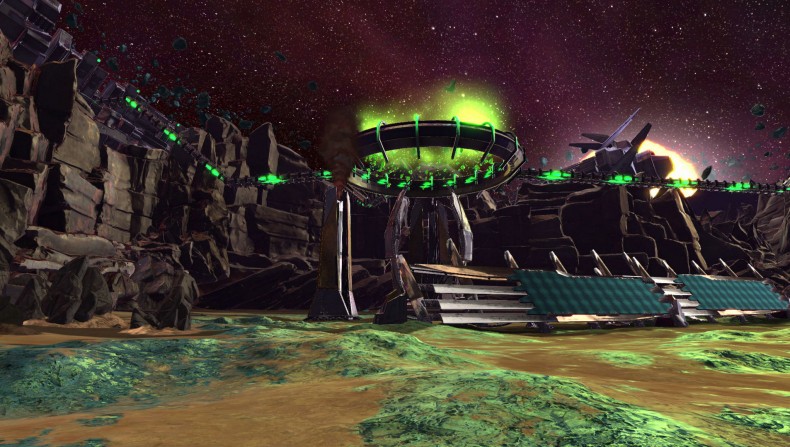 With each new version throwaway new modes have been added but it’s the stellar base game that has always been the main draw here, a base game that has gone almost completely unchanged along the way, and Super Stardust Ultra VR does absolutely nothing to change this.

The big new addition, in fact the only new addition here, is Invasion, an ill-advised VR-exclusive mode which sees players enter the cockpit of their craft, blasting those familiar robots, aliens and rocks from a whole new perspective on the planet’s surface. It’s a pretty terrible idea which falls flat for a number of reasons and I suspect most players will have reverted back to the classic arcade mode quite quickly. My main issue with Invasion is that, due, I’m assuming, to the extra processing power being used to drive the VR experience, all-important Stardust elements suffer. Enemy numbers are decreased, maps are smaller and feel flat and boring, there are less weapon and point upgrades to collect and the whole thing just feels much, much slower. If you’ve ever played Super Stardust, and who hasn’t given it was offered free to all PlayStation players by way of an apology in the wake of the PSN account data leak back in 2011, you’ll know that taking speed and enemies out of the equation is a big no-no.

Super Stardust has always been about that beautifully hypnotic death ballet, the addictive rhythmic groove a player falls into as they balance switching between weapon types to blast enemies and break apart asteroids, weaving and shooting, picking your moments, waiting until the very last second to unleash bombs or collect upgrades, every aspect of the game’s mechanics combining perfectly, it’s one of the best twin-stick shooters ever made and it’s exactly why the base game has remained unchanged over all these iterations we’ve seen in the last ten years. Outside of the new VR mode the classic game remains untouched, although you can now get down to racking up massive scores on those familiar planets while floating in VR space above the action, it adds absolutely nothing to the gameplay and to be honest I’d rather play it normally on a TV as the picture is clearer and mucking about with the PSVR headset can be off-putting when the action gets frantic.

There really isn’t much more to say about Super Stardust Ultra VR; it’s exactly the same game you’ve been playing for a decade with a totally inconsequential and unnecessary VR mode stuck in there to amuse you for an hour or so. If you have PSVR (or even if you don’t) and you’ve never played Super Stardust I highly recommend you stop what you’re doing and run into the streets to find a copy right now. If, on the other hand, you’ve seen it all before, I’d struggle to give you any reason why you should go spend your money on this version. It’s a classic case of launch line-up filler, a cash grab that does absolutely nothing to justify its existence as a VR-exclusive title.

New mode is bad
No other new stuff

The new mode is unnecessary and strips away the very elements of gameplay that make Super Stardust so good in the first place.