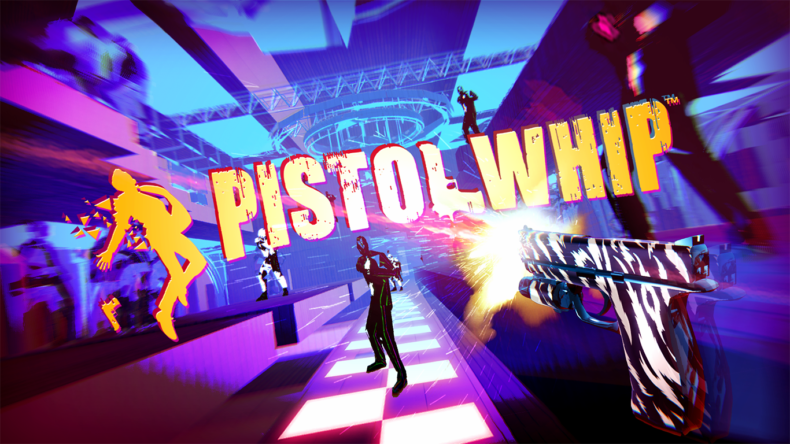 I’ve not had this much fun in VR for a long time. In fact, I’ve not had this much fun in the years since owning a PSVR. Pistol Whip is an on-rails rhythm shooter that has you moving through pulsing environments whilst shooting enemies with your pistol, all whilst listening to EDM tracks that blow your damn head off. Cloudhead Games has created a satisfying and simplistic game that takes the best bits of games like Thumper, Beat Saber, and Superhot, and injects it right into your eye balls.

The main premise of Pistol Whip is to get the highest score possible by picking levels – or scenes – to play through and shoot in time to the music. Each level has a different theme and setting. Espionage, anime, and science fiction are only a few of the inspirations for the level design, and each one has a different track from a wide range of artists off the Kannibalen Records label. Whether you’re a fan or not, the thumping dubstep, electro, and trap tunes make your eyes water in the best way imaginable. 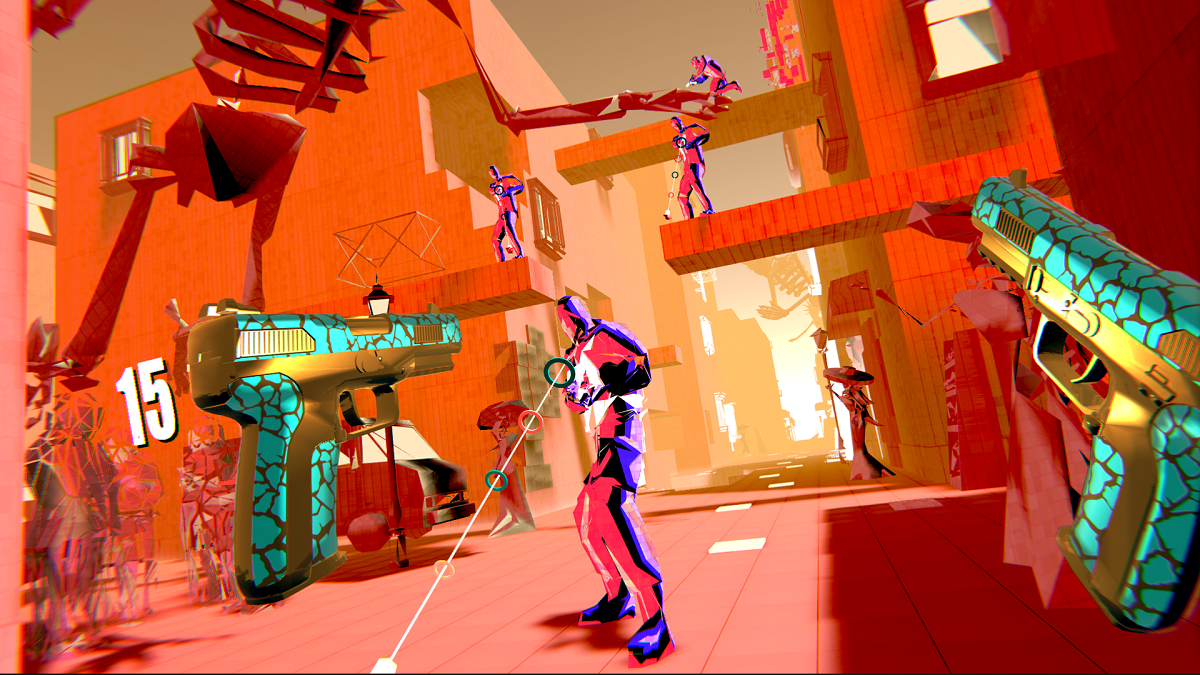 Remember that scene in the first John Wick where he makes his way through the nightclub in search of Iosef Tarasov? The heaving beats and flashing lights, the river of bullets, the excitement. Pistol Whip delivers this kind of experience, but turns up the intensity to levels you never knew possible. Taking the responsibility of having to run means your sole responsibility is shooting the bad guys and dodging bullets. You’ll start off with one pistol, and as you move through the different scenes (which there are loads of), three enemy types will appear. Some will only take a single bullet to take down, others two, and the final one requires at least four bullets to make them disappear.

As the beats ravish your senses, firing bullets in time to the music nets you more points. If you get shot, you can replenish health by killing enough enemies in quick succession. Reloading is easy, whereby pointing the gun down to the ground refills your magazine. Sometimes you’ll be firing at more than five people at a time, at the same time trying to dodge bullets. A simple move of the head will get you out of the line of fire, but trying to shoot and evade enemy fire can be particularly challenging. Walls and low ceilings will also require you to duck and move out of the way, making Pistol Whip as much a workout than a shootout. 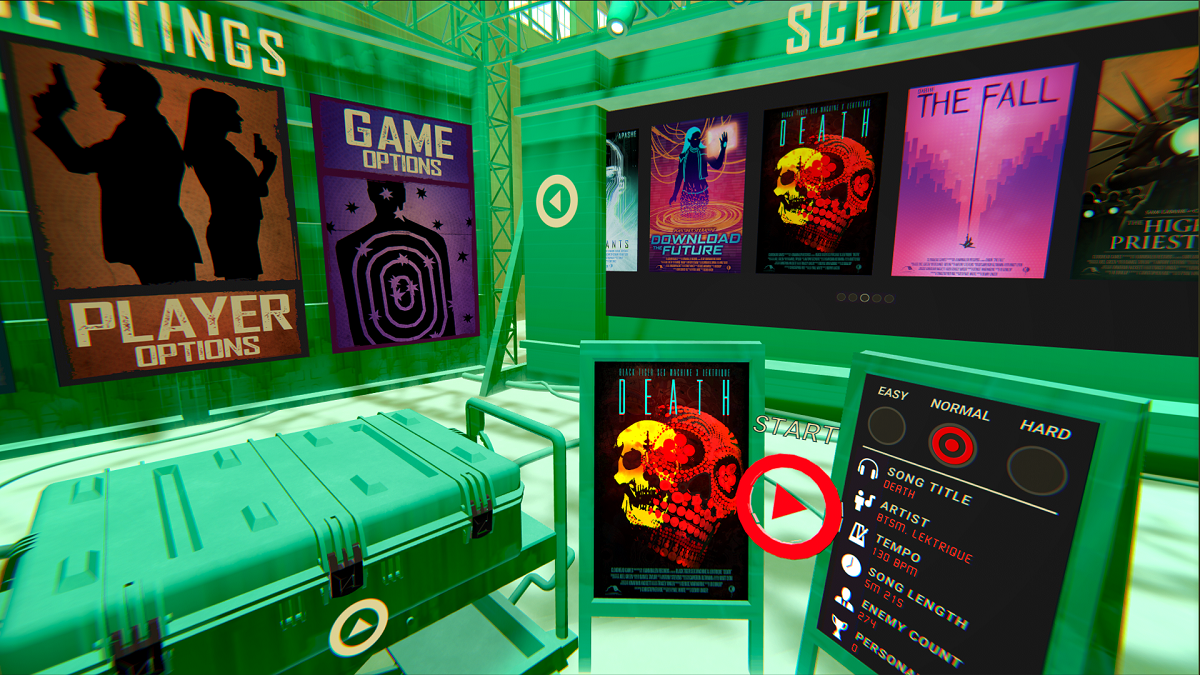 There’re are a surprising amount of options to make the game harder. Modifications like Deadeye mean you don’t have any assistance when firing at your enemies. You can choose to Dual Wield two pistols with the Move Controllers, but you’re rewarded for accuracy, so it all depends on what your play style is. You can also remove obstacles allowing you to focus solely on shooting, but this will take 20% off what your score would be if you were playing without these modifiers. You can also play around with your gun controls, including an option to chance the recoil. All of these options make Pistol Whip more challenging, forcing you to weigh up the risk and reward of your choices.

I love the aesthetic so much. It is one of the nicest looking games on PSVR, and has a mix of different styles that feel familiar as well as original. Every environment reacts to the music – like a heartbeat – as the rhythm moves in time with every beat. I enjoyed every level. Some are harder than others. Some are more intense whilst others opt for endurance, but they all offer something special. What I did love about Pistol Whip is the option to play any level at any time, meaning your not limited by progression. If you’re struggling with one you can move onto the next one without frustration seeping in. 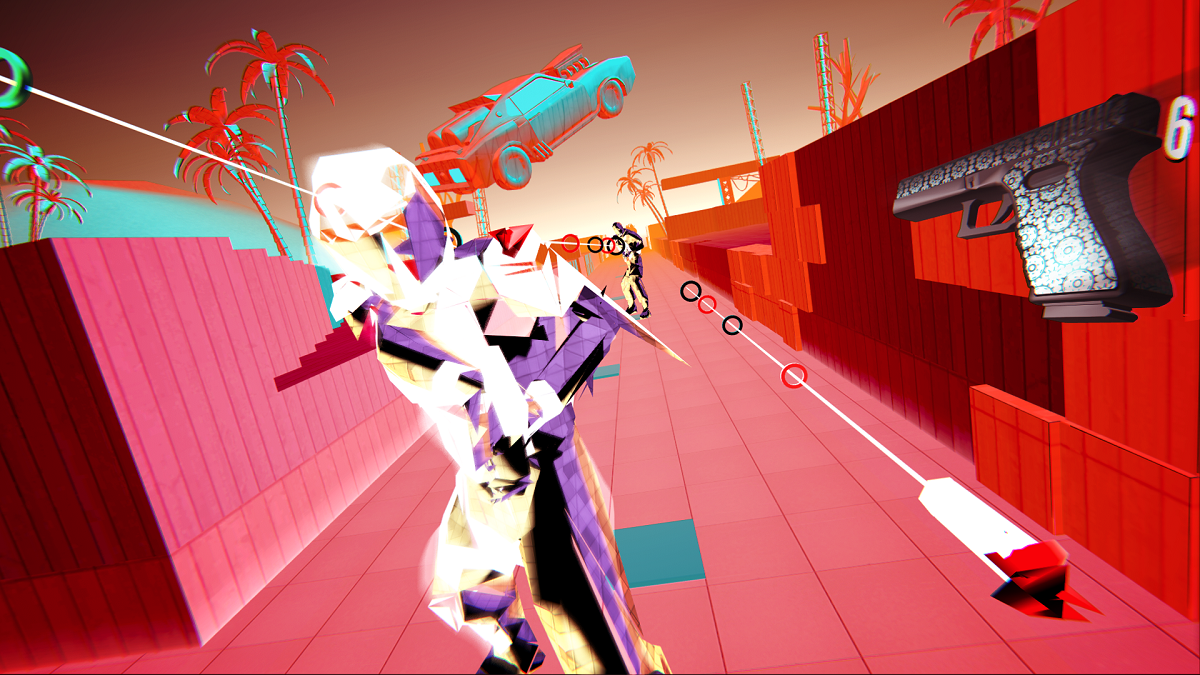 There’s an element of customisation in your pistols which adds a nice touch to how your weapons look as your fire them off at your enemies. You can chance the colour and pattern, as well as select a range of gun styles. You can even change the sound of when you pull the trigger, including that satisfying silencer squeezing well-placed bullets at your enemies. It’s no surprise that Pistol Whip is heavily inspired by John Wick, so much so that there’s a Baba Yaga Collection of guns straight from the movies. If you didn’t feel like the legendary assassin before, you certainly will now.

Pistol Whip is my favourite PSVR game of all time. The excitement of moving through the gorgeous levels whilst firing your gun in different directions, all whilst listening to an exhilarating soundtrack make it feel like nothing I’ve played before. With three difficulty levels, multiple gun controls, and various modifiers, you’re given plenty of control in how you play as well as making the game as challenging or as easy as you want.

Pistol Whip is one of the best games on PSVR. The shooting is satisfying, the level design is fantastic, and the music is phenomenal, making the whole experience a heart-pounding joyride through the senses.