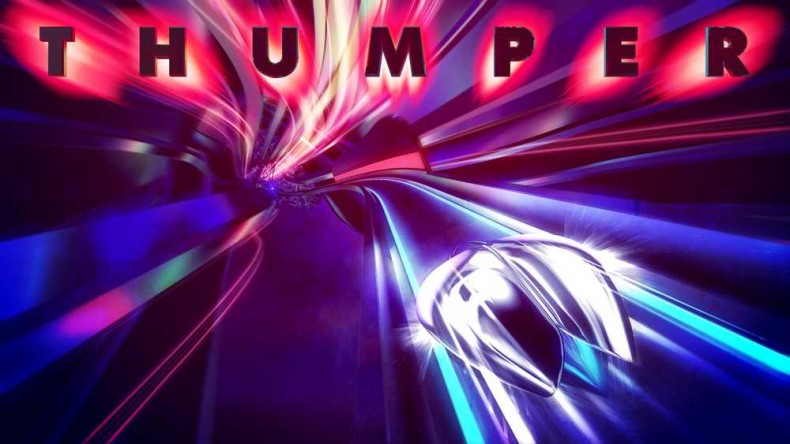 Playing Thumper does something to you – it rearranges your wiring and transports you to another level, transcending consciousness to fuse you to its thumping soundtrack. It’ll bore into your spine and attach itself to your brain as its heavy percussion and distorted electronica rattles around your head and keeps you playing, absconding from reality to remain a part of its nightmarish soul. You may think I’m exaggerating a little, but Thumper really does provide an experience like no other.

Thumper is a rhythm game, but it’s not that simple. You control a silver scarab-like avatar through different linear trails filled with sharp corners, obstacles and various other dangers. You only ever need to worry about directing your beetle and hitting the ‘beat’ with X; as you move over a bright light, pressing the X button will connect and you’ll feel the vibrations and hear the thud of the drum or deep synth. You’ll be given additional commands, but they’re so simple it’ll never get confusing, and they’re incorporated in a smart and respectful way.

Each musical track is filled with various percussive cues or obstacles, and by connecting with each one you’ll move along to the next one. Pressing X and holding left or right on the analogue stick with let you speed around a corner successfully or holding up while pressing X can have you jump and hit one of the rings that sometimes circle the track. As the game progresses, the levels become faster and denser with these cues, but listening intently to the beat is going to help you the most – don’t watch the track, listen to it. Thumper has boss battles, and they consist of about four separate stages. You have to chain different beats together to open up a chance to fire a pulse of green light at the big, freaky-as-hell floating head. If you miss a beat, the green chain of light turns blue and you’re back to square one, but finally pushing a shot towards the boss is akin to Luke Skywalker firing a shot into the exhaust ports of the Death Star. It’s invigorating and manageable after a few tries (if that) and you’re never struggling on the same one for too long. Not that Thumper is easy, but the music trains you and you get into a zone, one that hooks you and never lets go.

You start playing Thumper with the opinion of it being another rhythm game that doesn’t feel that different from say, Amplitude, but as you see the chaotic visuals and listen to the dark, brooding baselines it’s clear this game is different.

There’s no story to think about, just the course, the music, the beat. You become so hypnotised by its flourishing psychedelia and the transforming metallic shapes you become completely immersed. It feels like that bit in 2001: A Space Odyssey or an old 90s Windows screensaver, mixed with a hundred half-speed Prodigy tracks and a weekend bender in Ibiza.

It has you pushing yourself to do better, thanks mainly to its grading system. You gain points for hitting every beat, hitting the analogue stick at the very last moment before a turn or not taking any damage. You can achieve a C, B or A, but the one you want is the prestigious S rank. An S rank isn’t painfully hard to achieve, but they’ll take practice before you’re getting one on every track.

The chrome veneer and the whirling lights make Thumper look like nothing I’ve seen before, and the music partners the visuals perfectly. My only negative is the frustration of missing a beat for the screen to soak in red lights and distorted images as you make a mistake and cost yourself another S rank. You’ve got a protective shield on your beetle, but once that’s gone you’ve got one shot left. Minor criticism aside, Thumper is a remarkable achievement in sound and it becomes its own mechanic in a game that relires so heavily on a solid and penetrating soundtrack. I can only imagine how good it would be in VR as it feels perfect for it. Wearing a headset, focusing on the rapid pace as well as the incandescent beats has all the hallmarks of what VR should be. Regardless, the PlayStation 4 version is still a magnificently fun rhythm game and should be played by everyone, including you.

Missing a beat is costly

You’ll spend ages playing through the different levels and adore every single step. The music is great, the visuals are better and everything comes together perfectly.

Thumper releases on Nintendo Switch in less than 2 weeks