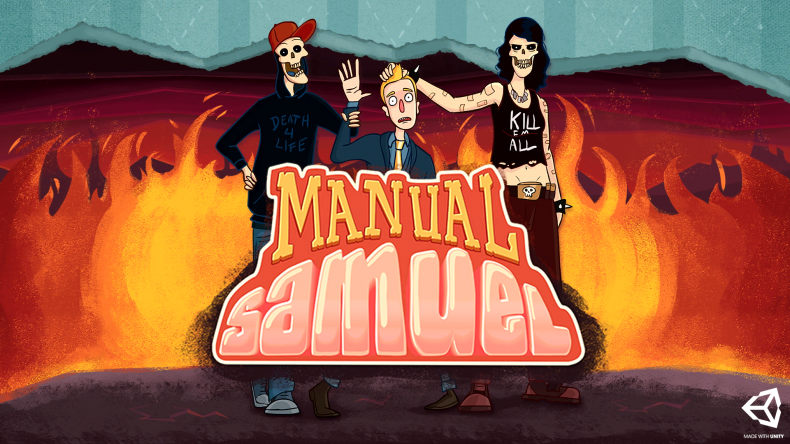 It’s been quite some time since I found a game that did something truly different, not just visually, but in the gameplay, too. Manual Samuel tries to tackle ultimate control over your lead character with 100% precision; from walking to driving, it’s brimming with new ideas and approaches each one with unique and gleeful enthusiasm, even if the fundamental controls can be a pain. Within the first 30 minutes or so, I was ready to give up. Remembering to blink because your vision blurs or breathe because your face will go blue easily gets forgotten, and making sure you’re getting the basics of movement right started to grate on me.

Samuel is a monumental douchebag – a rich, arrogant, lazy douchebag who has never done a hard day’s graft in his entire life. After getting hit by a septic tank truck and losing his life, Death shows up sporting a baseball hat and hoodie, giving him one chance to be brought into the land of the living on one condition: live manually for 24 hours. Every single action you do is controlled by a button on the controller, meaning you can’t walk with a push of the analogue stick or do something menial by pressing the action button. There’s a great sense of humour in Manual Samuel, plenty of funny one-liners and dialogue, although Death’s constant use of the phrase “holy faeces” is highly annoying and far too overused. With certain characters it feels like Perfectly Paranormal are trying too hard to be funny when they could’ve gotten away with toning it down just a bit. It’s pretty amusing watching Samuel trying to undertake everyday tasks like having a wee or drinking coffee, especially when you’re not hitting the button prompts at the right time. It’s never vulgar or excessive, and it never tries to offend or shock for the sake of it. The animation is bright and mischievous, like an Adult Swim cartoon, and with the cheekiness of its absurdity, you’re never left without a smile on your face.

Every button controls a part of Samuel: pressing the L2 and R2 triggers control his walking, Circle and Square control his breathing and the Cross button makes him blink. Getting these actions to operate in perfect unison keeps him on his feet and operating as a normal human being. It may be a pretty simple task from the outside, but it can be finicky and frustrating. Press a trigger button wrong and he falls on his arse, forget to breathe and he’ll pass out, walk too fast and his spine will bend causing your body to flop over. It does become easier the more you play, but it never feels like second nature and you’ll find you’re making the same mistakes no matter how far along you are.

The clever touches come when performing everyday tasks. Driving has you putting your foot on the clutch, accelerating, and then taking your foot of the clutch to move. You have to change gears to pick up speed like in real life, along with breaking and changing lanes. I have no driving experience and I found this part frustrating; it took my wife to explain what I needed to do to make sure I was picking up speed due to the demands of Death, sitting in the passenger seat saying “faeces” for the billionth time. In a later level, you have to ask reception at your place of work for a key card, which involves stopping the marker along a gauge at the right letters in the words. Peeing, showering and everything in between takes skill, and at the same time you’re trying to breathe and blink so you don’t collapse or go blind. As frustrating as it can be, I liked the variety and depth in each task.

Perfectly Paranormal has taken cues from games like Monkey Island and Octodad, but managed to create mechanics that are new and unlike anything else you’re likely to play. It’s not a particularly long game and the different tasks and controls you have to use act as more of a showcase of ideas as opposed to bringing immersive gameplay to the forefront. It can be frustrating at times, but you can’t deny there are some nice ideas here and the humour is more often than not on point. It’s a quick, funny and smart little game that most will find something to love about.

Controls are frustrating
Death is irritating

There are some great ideas in many of the mini-games and the humour is great, but the controls are frustrating and detract from the fun.