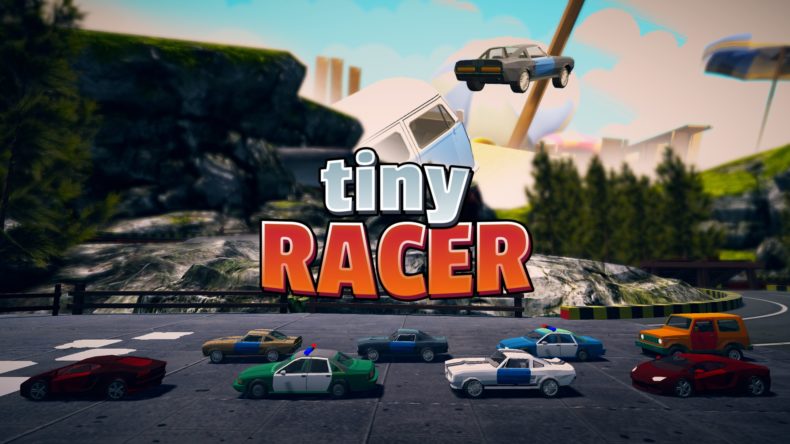 Tiny Racer is not a fun game to play. I refuse to sugar coat it. The cute, Micro Machines-like style belies a game that feels almost unplayable at times, and shows little respect for its players.

It’s a real shame, because it looks like a game I should love. It has the fun design of Foreveracers and looks to have the action-packed racing of Mario Kart, but I have never experienced such high levels of frustration as I did while playing Tiny Racer. 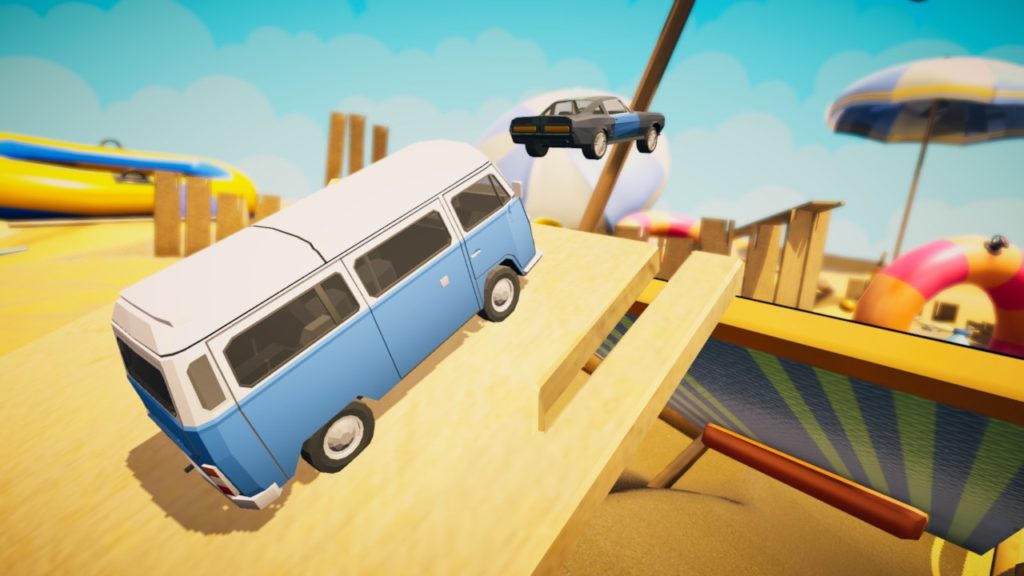 To start with, its tutorial paints a picture of a simple, physics-based racer. It puts you in a radio-controlled VW Microbus (think Fillmore from the Cars movies) and runs you through the basics, which felt fine. I had no complaints, I was eager to get into the game proper.

Then I hit the main menu, with its basic fonts and annoying, endlessly looping jingle. Everything was awkward to navigate, especially without a dedicated “back” button to go back to your previous screen. You can only select things by highlighting them and pressing A, which would be fine if the menus weren’t so fiddly and you can’t always see what you’re selecting. Fine, I thought, I’ve dealt with bad menus before, it’s not a deal breaker.

And so, I moved on. I leapt into Tournament mode, ready to enjoy some fun racing. I was even prepared for a decent challenge, but I was truly unprepared for what I actually got. The countdown started, 3…2…1…and off I went. The familiar buzzing of radio-controlled engines from my childhood, rang out in a chorus as eight vehicles raced for the first corner.

Then all hell broke loose. 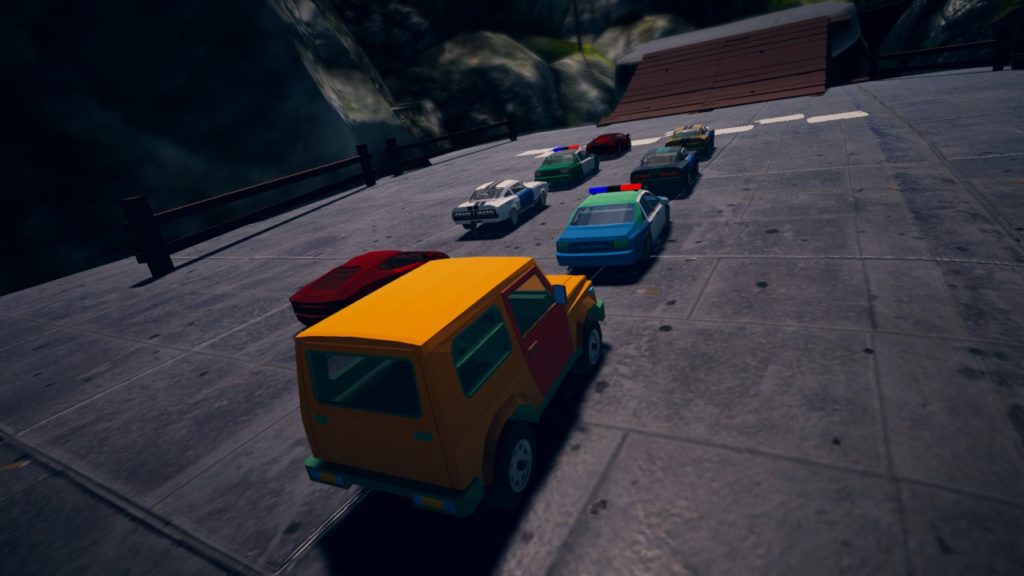 Cars weaved about without rhyme nor reason, smashing into each other (and me), resulting in spins, rolls, flips, and all manner of carnage. At first, I laughed. It was absurd, the lightweight vehicles being tossed about the place, the image was as hilarious as it was spectacular. Soon after, however, I learned that this was basically how the AI reacted to anything in its presence. It swerves into your car with reckless abandon, and you’re left either facing the wrong way for the hundredth time, or knocked off the edge of the map, effectively ending your race as you’re left at the back of the pack with almost no way to catch up.

A lot of the problems stem from the overly light, seemingly random physics, mixed with some poor track designs that seem designed to be as awkward to navigate as possible. Large hills lead up to blind drops, roads have massive, craggy outcrops for no reason and it all feels like the game wants you to fail. There’s no real reason for these tracks to have bottomless pits, but they do and they will ruin a large percentage of your races. Either through poor design that intentionally obscures the drops, or because the AI homed in on you with laser-guided precision, in order to deliberately and maliciously take you out of the running. I lost count of how many times I restarted races, because there is no way to catch up once you’re at the back. 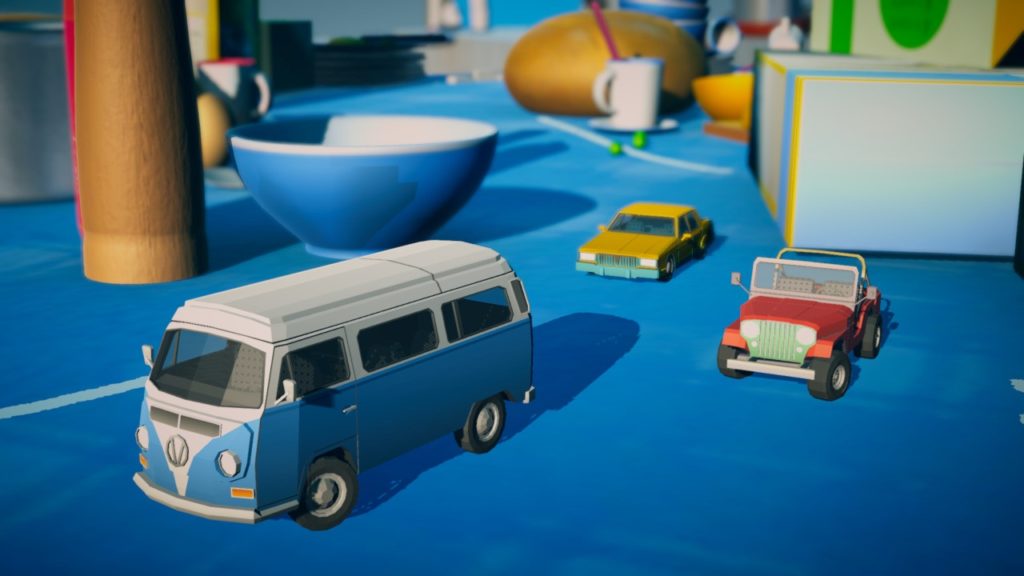 It does run well, at least. It’s relatively smooth when played in either handheld or docked, with no noticeable drops in the framerate. And aside from a rather shortsighted viewing distance, thanks to some liberal use of depth-of-field effects, it does look good. The tracks are nicely textured and I quite liked the low poly style of the vehicles, despite the style being slightly at odds with the environmental design.

Nice visuals simply aren’t enough to redeem Tiny Racer, though. The way the AI blatantly tries to take you out of every single race feels disrespectful to the player and their time. Especially as you’re forced to play through the main game in order to access more than its two starting tracks. The bouncy physics and overly lightweight vehicles, combined with the poor, inexplicably angular track design and the hyper aggressive, race-ruining AI, make Tiny Racer one of the least fun racing games on the market right now. Do yourself a favour and stick to Mario Kart.

With its bouncy physics and ludicrously aggressive AI, Tiny Racer feels unbalanced at best, completely unfair at worst. This makes for one of the least fun racers around.