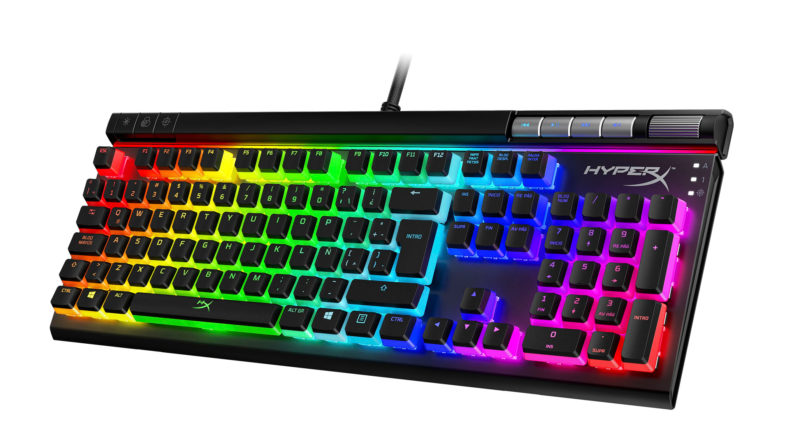 These days, RGB lighting is as much a part of the average streaming set-up as the wiring itself. How your rig razzles and dazzles is almost as important as how it actually performs, and with the right software and enough brand fidelity, you can sync up every device to put on a light show worthy of rock concert. Well, sort of.

My point is that if that’s your bag and RGB lighting on your peripherals rocks your boat, then you could do a lot worse than checking out the HyperX Alloy Elite 2 Gaming Keyboard. Although it’s not cheap (currently around £150 new), it’s got a suite of features that ensure it will satisfy the demands of most set-ups.

For a start, the keys have a patented “pudding cup” design whereby the letter blocks sit atop a pyramid of white plastic through which the RGB shines. Compared to some keys, they’re a little slippery (I’ve been using the Q-PAD M95 keyboard and the finger feel is just a little superior on that one, in my opinion), but the RGB display is second to none. It also adds a little splash of flare without the RGB activated, giving the keyboard a distinct black & white aesthetic.

A trio of switches on left side of the media bar allow you to adjust the brightness and display pattern, or activate gaming mode to disable certain functions like the Windows key, which is handy if you’re prone to wandering fingers during energetic matches. HyperX’s NGENUITY software will allow you to program the RGB display, and even sync it with other HyperX devices you have. 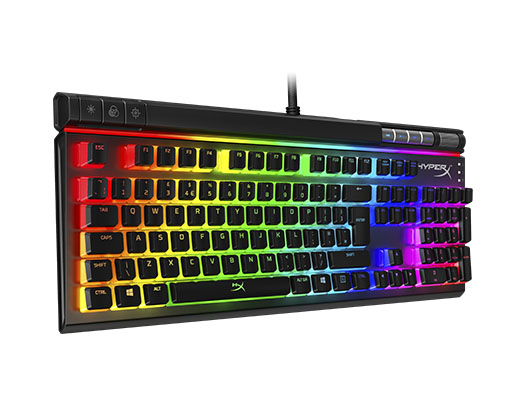 On the right side you have Play/Pause, back and forward skip buttons a mute button, while a volume wheel allows you to directly control the volume without adjusting anything on the monitor or speakers. A little line of LEDs indicate whether you have Num Lock, Caps Lock or gaming mode activated at any given time.

Interestingly, the HyperX also comes with a pass-through capability, which isn’t all that common on keyboards. It has a thick power cord with two USB connectors, and a USB port on the back of the body which allows you to plug a second peripheral (headset, controller, mouse) directly into the keyboard. I tested it with the dongle for my ROCCAT Kain 200 Aimo wireless mouse and it works flawlessly.

In terms of durability, the HyperX Red switches beneath the keys promise to be good for 80million presses, which is pretty decent but also fairly standard. They do have a shorter “travel time” from press to screen than most rivals, with a 3.8mm distance before they bottom out but, honestly, you’re picking hairs if you can really feel this difference or if it even matters unless you’re a professional esports gamer. I will say that the wider tops on the keys made it easier to use WASD when gaming, and the linear key switches are just about quiet enough to not annoy your squad over the game chat. The only thing I really missed compared to the Q-PAD M-95 was a wrist-rest, which sadly the Alloy Elite 2 doesn’t have.

If you’re looking for a gaming keyboard that will dazzle in all the right ways but still function comfortably and responsively, the quiet, stylish and functional HyperX Alloy Elite 2 is perfect for you.