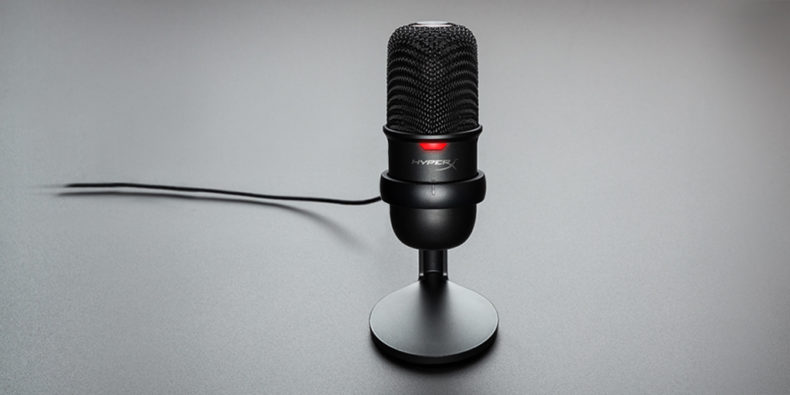 For such a tiny device, the HyperX SoloCast microphone is surprisingly competent when compared to its bigger, flashier competition. It’s called the SoloCast because of its single cardioid pick-up pattern, which seems like a bad deal compared to the majority of mics such as the HyperX QuadCast that have four-directional patterns, but if you’re using the SoloCast for streaming or video production, you’ll likely only use the single pattern anyway. Basically, it just means it’s picking up and recording what’s in front of it.

Out of the box it’s a compact, sleek little device that comes with a removable stand, a USB-C cord, and a couple of thread connectors (3/8 and 5/8) to fit it to a standard boom arm. That it doesn’t come with its own shock mount is a shame, and kind of necessitates using an arm if you want to avoid picking up surface tremors from your desk – especially if you’re going to be clicking a keyboard and mouse while recording. 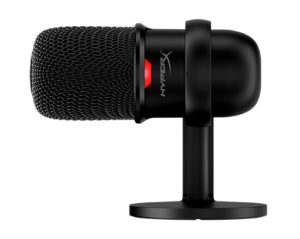 That said, for straight recording it works really well. I tested it with and without a pop filter, on the desk stand and on the boom arm, and it does an excellent job for something so small and relatively simple. It’s super light, and its design is such that it kind of just disappears into the background when it’s not in use. A single red light (no RGB here) signifies that it’s ready to record, and flashes when it’s muted.

Handily, it features a tap-to-mute button on top of the mic, again making it ideal for streaming and podcasting. Unfortunately, though, you can’t modify any of the finer details or equalise the sound quality without using HyperX’s nGenuity software to do so. There’s not even a knob or dial to adjust the gain. It’s a minor inconvenience, maybe, but it singles out the SoloCast as a mic more suited to starter set-ups.

For somewhere around £50, this compact little mic will slide into any set-up with ease and perform perfectly well – but better with a shock mount or boom. You’ll also need to know what you’re doing in the software (programs like OBS and Shadowplay also have settings to adjust recording levels) and accept the fact that the SoloCast is very much a no-frills option.

But if you want a small, well-made, and, dare I say, cute little mic to round-off your recording set-up, the SoloCast is affordable, incredibly easy to plug in and use, and delivers decent quality despite its apparent lack of features.