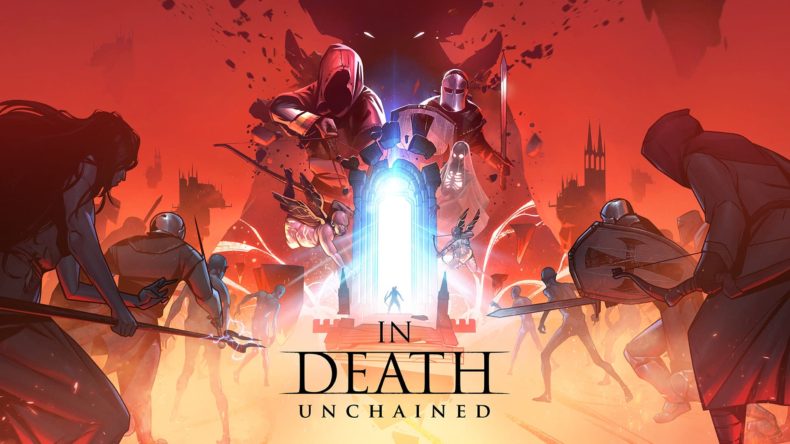 I’ve dabbled with VR a bit over the last few years, owning a PSVR for a few months which I used almost exclusively for Beat Saber, and more recently an Oculus Rift, which allowed me to try a couple of highly competent offerings in Half-Life: Alyx, Star Wars: Squadrons, and the rather excellent Superhot VR.

Having purchased the Oculus Quest 2 in order to leave the tangle of wires behind and experience VR plus freedom of movement (honestly, there’s nothing worse than getting your hand caught in a cable as a headcrab zombie staggers towards you), I’ve been trying a handful of different titles. Being able to move the Quest 2 to a different room away from the fairly confined space of my PC set-up has allowed me to sample a variety of VR games, such as The Climb, Vader Immortal, and this, In Death Unchained, a roguelike bow shooter from Superbright. 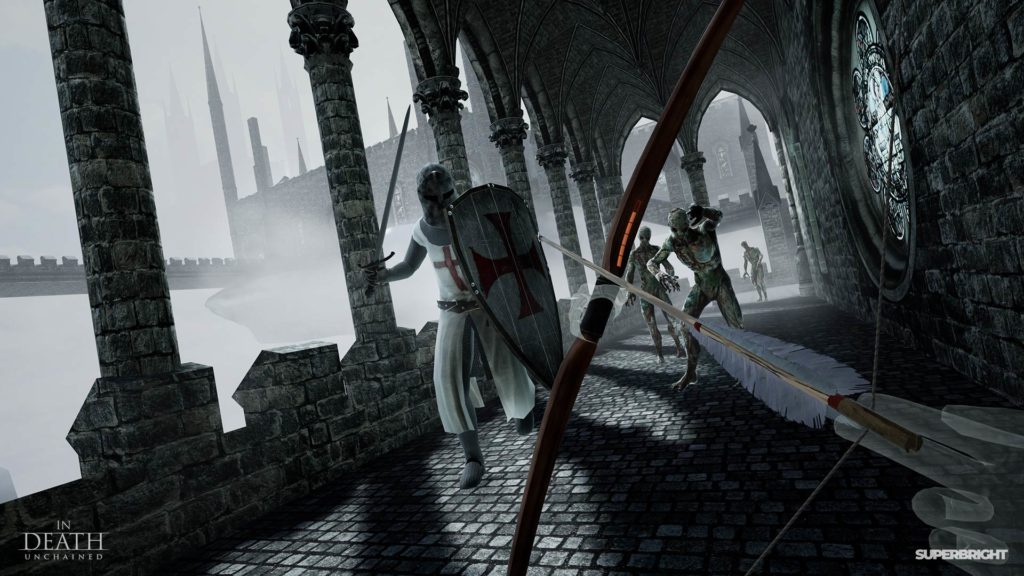 First things first, I have a history of suffering inertia after prolonged sessions in VR, but thanks to the Quest 2’s wonderful head-tracking tech and the fact that many VR devs actively work to assuage these problems, it’s been getting easier. In Death Unchained, for example, I can play for hours and the only complaint is that my arms are knackered.

In it, you play an unnamed fallen angel fighting their way back up through Purgatory to reach Heaven, which for some reason involves taking a bow and arrow to the heads of a parade of ghastly monsters, corrupted knights, cherubic nasties, and massive bosses. Combat is all bow-based, and you have a shield to block incoming attacks and a nifty dodge move to slip out of harm’s way in a pinch.

Set across a network of floating battlements, towering spires, and shadowed archways, In Death Unchained features a roguelike structure that gives you one life per run, though once you unlock additional areas they stay unlocked. Interestingly, though it does support free movement, I found that the alternate mode works better. This allows you to fire a teleport arrow wherever you want to go and, provided you can land the arrow, you’ll teleport there instantly. It’s handy for getting around the place fast if you want to, but it’s also the ideal way to take your time, too, picking your way through the corridors to assess what lies ahead. 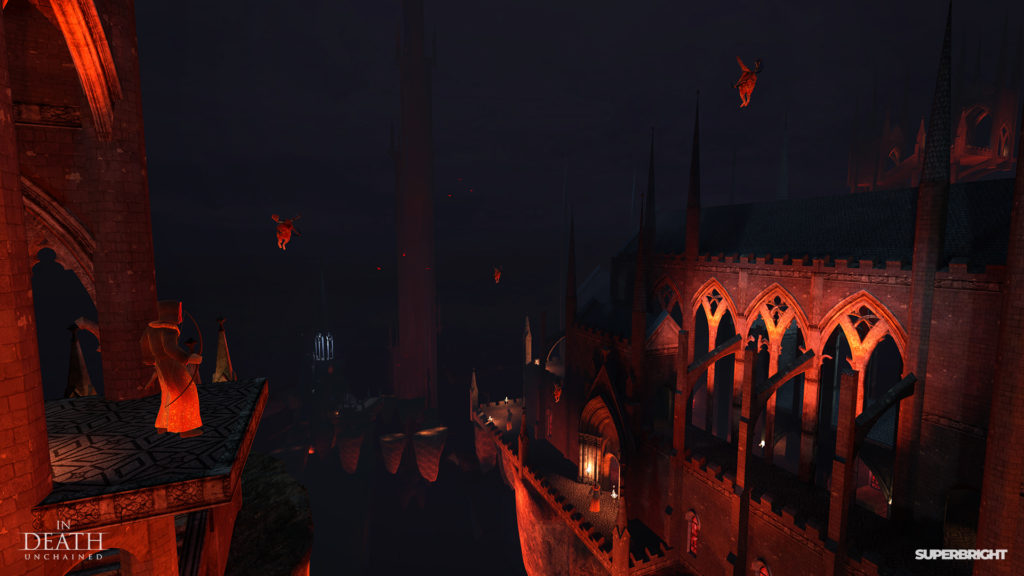 All enemies have an audio tell, so you’ll know what type of monster is ahead of you but not the quantity. Some will charge you, others will stagger towards you, launch arrows from afar, fly at you, or float through walls seemingly out of nowhere. A variety of special arrows that free, burn, or launch a burst of ammo at the enemy can help turn the odds in your favour, but things like healing grails and save points are few and far between.

Sooner or later you’ll unlock the crossbow, which is more powerful and arguably more accurate, but it never felt to me as much fun as using the bow, though it’s certainly easier on the upper arms. It makes boss fights that much easier, too, as you can do more damage and equip special bolts that, for example, explode on impact.

The boss fights themselves are possibly the weakest element. There’s no doubt that they’re incredibly tough, and massively tense as a result, but they also feel weirdly at odds with the creeping dread of the minute-to-minute gameplay. 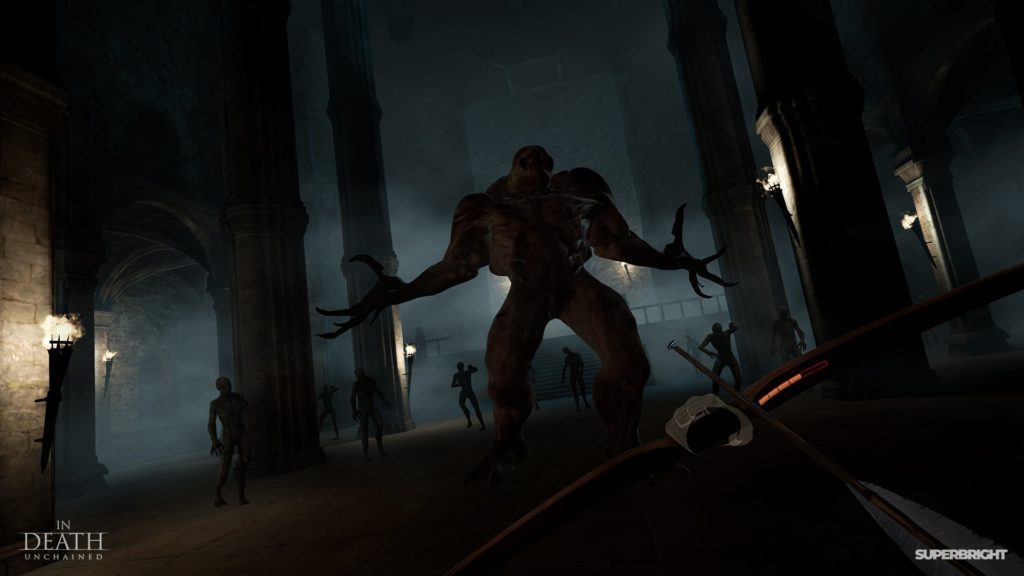 At certain points in each randomly-generated area, you’ll find a point where you can save and take a break, or buy ammo and health if you have enough gold. And at the end of a mission, you’ll see the progress you’ve made towards a huge variety of milestones which take the sting out of the relatively sparse character progression by at least making you feel like you’re achieving something.

But it’s in the rhythm of the raw combat that In Death Unchained really sinks its claws in. The shuffle of approaching enemies, the physics of each soaring arrow, the elation when you speedily clear the room or land a distant headshot that you were sure was impossible. It’s not the most beautiful VR game, but the latest Oculus Quest 2 patch has improved the draw distance and texturing, added in extra details, atmospheric touches such as roiling mist, and made the whole experience run smoother than before.

I’ve played for well over 8 hours in teleport mode and I’ve experienced no discomfort, no dizziness, and no little spacial accidents (which could occur if you’re not careful as there is potential to get spun around a bit in the heat of the moment). The sound direction is wonderfully immersive and the atmospheric visuals make it feel like you’re the unfortunate protagonist of a Dark Souls game, and makes me wonder what Superbright could do if they built a sequel using fully modern VR tech. For now, this is a great bow game that’s still a lot of fun despite a dark, unsettling atmosphere.

In Death: Unchained is a great VR bow game that's still a lot of fun despite a dark, unsettling atmosphere.