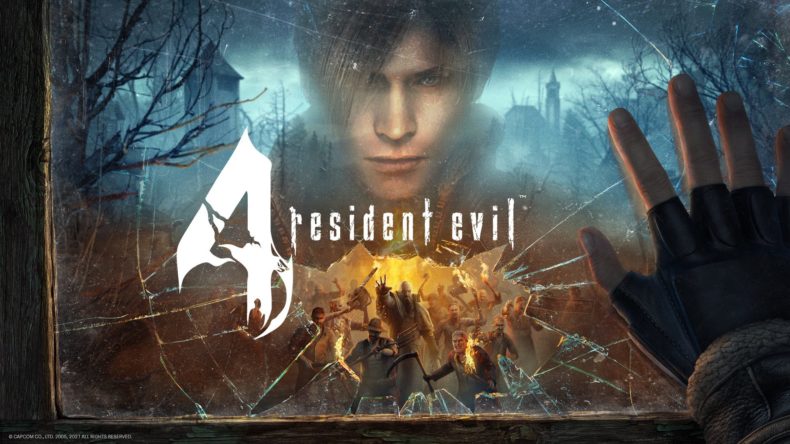 Quite cleverly, Armature have made few changes to the storyline, leaving it almost completely intact and focusing instead on translating the action segments into 1st person. This perspective shifts back outside of Leon’s head for cutscenes, which at first is jarring but makes a lot of sense. It allows you to see cinematic moments like diving through windows or kicking doors instead of having to envision a disembodied leg in front of you or, say, smashing your own head through a sheet of glass while tumbling.

As you traverse the gloomy, creepy wilderness in the early moments, the sound effects are what really set you on edge. Leon S. Kennedy might be a highly trained operative on the trail of the President’s daughter, but I most certainly am not. I’m in a chair at a desk and yet, when I hear something breathing behind me, or the scraping sound of a dragged weapon, I’m almost on the ceiling every time. The game itself is not particularly scary or even jumpy, but investigating the mist-shrouded woods or, notably, the lofty halls of Salazar Castle feel much more tense in VR. 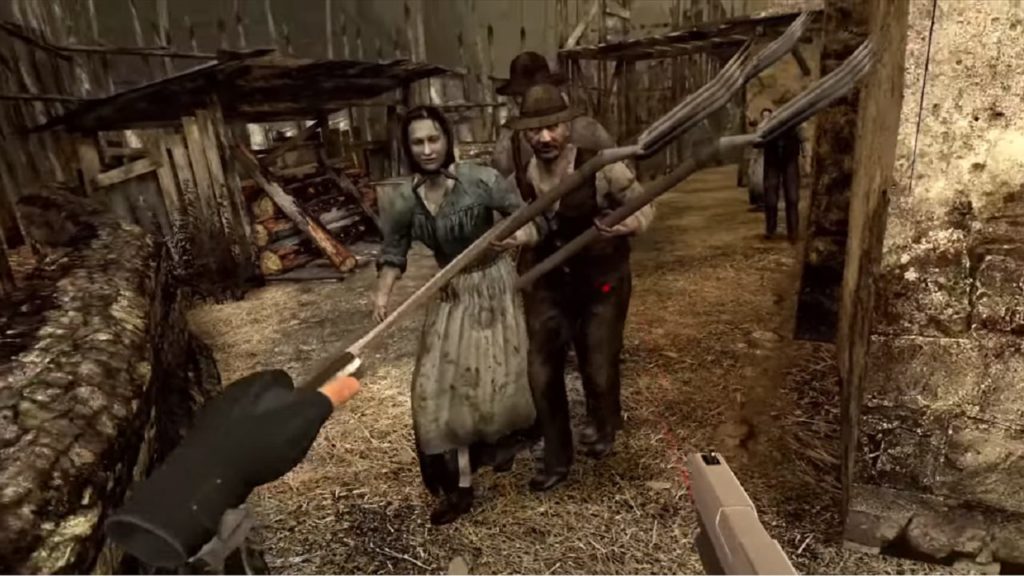 Running this on the Oculus Quest 2, it’s not the best-looking version of Resident Evil 4. Yet still, having to be aware of your surroundings at all times, constantly looking back over your shoulder, and checking every corner – even if you know already where the enemies are going to come from – heightens the tension. And frankly, anyone who doesn’t shriek like a girl when Del Lago charges you head on through the water, huge maw gaping wide, is a far braver soul than I.

CHECK IT OUT: House of Ashes is a brave new direction for The Dark Pictures Anthology

But it’s these moments that make Resi 4 such a triumph in VR. The fact that you know what’s coming, but aren’t sure how it’s going to look until it’s staring you in the face, makes a massive difference. Rather than necessarily fearing the unknown, instead you fear the familiar, because a couple of shambling Ganados are a different prospect when you’re fumbling to reload your pistol in real time.

Weapon management is handled well here, too. There are two modes: Immersive and Quick Select. In the former, you select your weapons by reaching to different areas on your body and holding the grip button. You can pull your knife, pistol, rifle or shotgun, and first aid spray from specific holster points, with ammo sitting on your left hip (or right, if you’re a lefty). 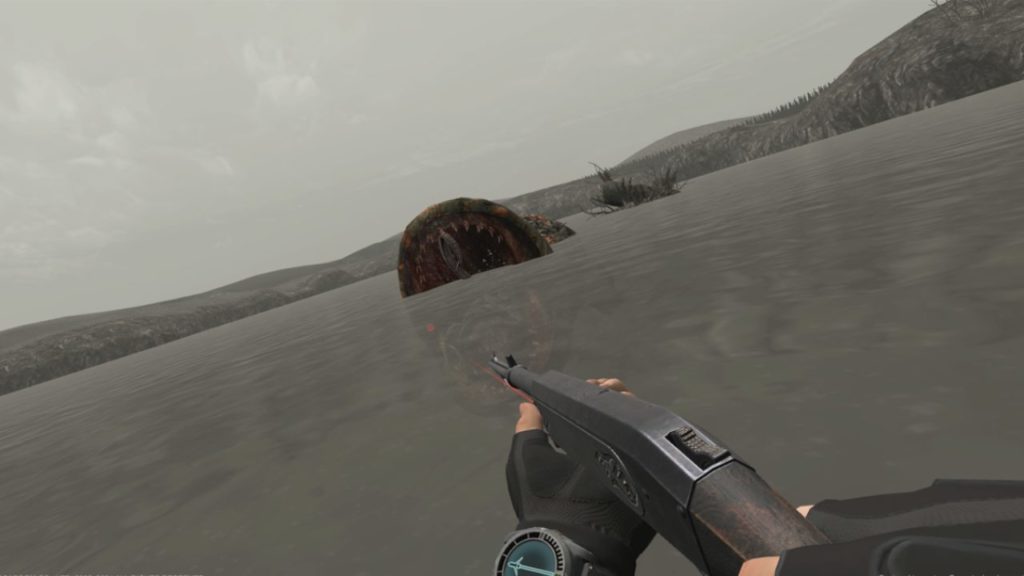 If anything I found the shotgun a little ungainly: having to use the pump action never felt completely natural, and I’d often fail to fully load the breach, leaving myself vulnerable. The pistol, though, always feels accurate and weighty, and the Quest 2’ stellar controllers performed admirably as always.

Quick Select mode transfers control to the left trigger and stick, opening a more traditional weapon wheel with which to switch guns and items. It doesn’t feel much less immersive, to be honest, as other things make up for it, such as taking your calls in first person and manually reloading your weapons. But Quick Select is just that, much faster and less clumsy.

With a full range of comfort options it’s also very easy to avoid motion sickness or fatigue. I played for several hours at a time sitting down, using teleport movement instead of locomotion. Snap turning also helps to keep me feeling happy and comfortable. I had to fiddle with the height settings a little, but beyond that I really had no complaints in this area. One thing it’s worth pointing out is that, if you play with full motion, it alters one of Resident Evil 4’s core conceits: you can now move while shooting and aiming. 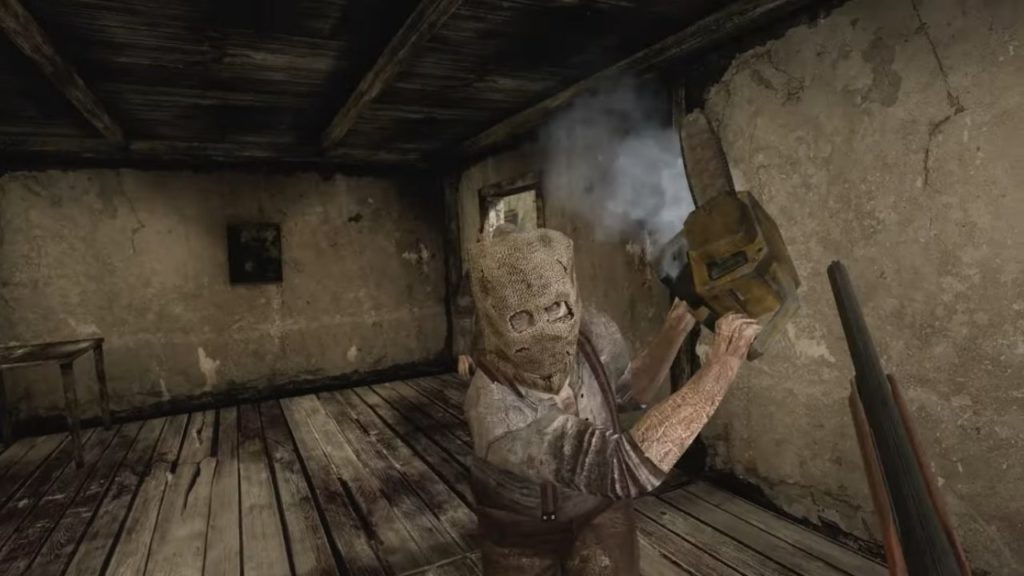 I’m one of those annoying folks who will argue forever that a trained operative should be able to run and shoot at the same time, but I know there’s an argument for atmosphere and immersion when playing the original (and Resident Evil 5, for that matter). However, it feels more natural here, as holding you in place while you shoot could actually work against the immersion.

Horror in a new dimension

As with most VR games, solving puzzles felt much more involving. Being able to physically interact with objects while fighting the urge to look over your shoulder elevates even simple puzzles, and the fact that most haven’t really changed helps. The lack of any additional game modes may disappoint some, though. Other than a straightforward firing range practice mode there’s no multiplayer or Mercenaries mode, but I never felt much of a loss not having them.

If you’re a fan of Resi 4 and you have access to an Oculus Quest 2, this is an absolute must-play. The change of perspective is enough to make this feel like a completely new experience, even if the broad strokes and story are familiar. It looks okay for a VR title, though I doubt either the environments or character models will blow you away – but the sound design is the star of the show. This is no lazy VR port from Armature, and instead genuinely adds another dimension to what many consider to be the best game in a series that’s pretty consistently great. If you can play it, you really, really should.

Resident Evil 4 VR is no lazy port, and genuinely adds another dimension to what many consider to be the best game in the series.