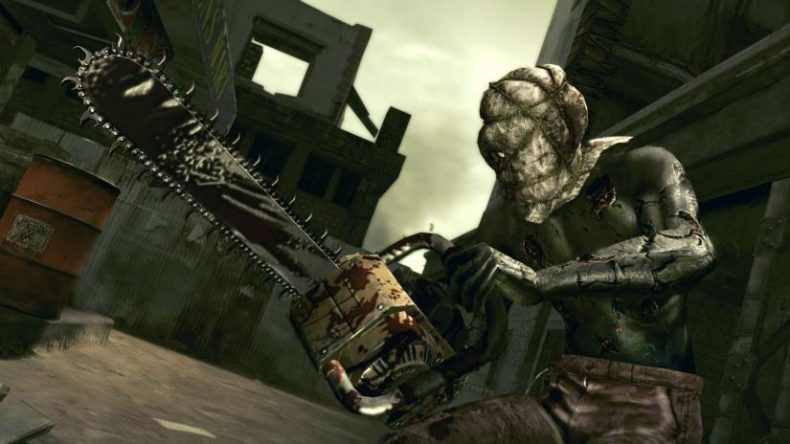 Resident Evil 5 was always up against it, having to follow the superb Resident Evil 4. Direct comparisons were inevitable, and it struggled to live up to the expectations of its predecessor. But it wasn’t all bad, the co-op was a breath of fresh air and the adventure overall was still thoroughly enjoyable. But the Switch version is the game’s seventh different platform release, and over a decade since launch, does it still hold up?

Let’s address the performance head-on, the framerate on the Switch version can be a bit temperamental. The uncapped framerate means the Switch version often fluctuates. It drops especially when there are lots of enemies on screen looking to take a bite of your squishy bits. Ironically a capped 30fps might have helped here, as the drops would be less noticeable. It’s the same in docked or handheld mode, although I found it slightly better in handheld. This was maybe because everything feels tighter and compact on a smaller screen. Conversely, the cut-scenes seem unaffected by drops and run as smooth as other versions. More importantly, there’s no interruption to the QTEs either – love them or hate them. If you miss one, it’s not the game’s fault, it’s yours. Split Screen versus mode is also an option, but the framerate really does suffer here, seeming to struggle with coping at running two screens simultaneously. At times it can become borderline unplayable as things can slow down and stutter during explosions and other busy moments.

One welcome addition though is the implementation of gyro controls. These were sadly lacking in Resident Evil 4 on Switch, despite them being there in the Wii version. Now you can use your Switch screen or JoyCons to aim instead of the analog sticks. This actually works surprisingly well, especially against spritely flying enemies, where your normal aiming reticle moved too slow to keep up with their erratic movements.

At $29.99 though, this does feel like an expensive offering. Especially for a ten-year-old game with framerate issues worse than other formats. Ultimately it comes down to how much love you have for the game, how much you will play this on the go, and how passionate you are about those gyro controls. There’s still a solid game under here, and outside of versus mode, the framerate is still playable. But in all likelihood, you’ll have a better experience on other formats.

Framerate issues, especially in split-screen
Expensive for what it is

The gyro controls are a welcome addition, but Resident Evil 5 on Switch feels inferior to other formats thanks to a sub-par framerate.