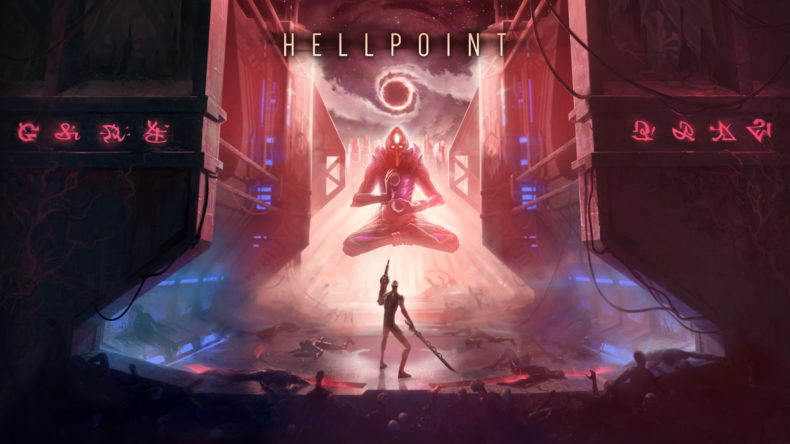 Hellpoint, from Cradle Games and tinyBuild, is very much a Soulslike. The enemies are difficult, checkpoints are further apart than the magnetic poles, and everything you meet wants to rip your synthetic warrior into little bits, just because. You play as a “Spawn of the Author”, an artificial lifeform created for reasons that Cradle Games almost bullheadedly refuses to directly explain. For some reason, you exist. And for further reasons, you’re born at the beginning and are immediately happy with strapping on armour and smacking the ever-loving snot out of anything you come across.

A lack of direct storytelling is a staple of this genre that’s now beginning to feel a little forced, and Hellpoint is almost the pinnacle of it. There’s no context for anything; there aren’t even journals or codex entries to peruse, and even the flavour text seems to be copy/pasted from a batch of really grimdark fortune cookies. I’m all for letting the player fill in the blanks, but when it’s all blank and the player has only a brush made from bits of old pipe and metal shards, it’s difficult to paint much of a picture of anything.

That being said, Hellpoint remains oddly compelling. You may well be hurling yourself against bosses and traps over and over again for no discernible reason, but that may be point of it all. Your nameless, classless, nondescript Spawn simply goes forward because the corridor behind is empty, and so do you, forging on for no good reason other than that this is a Soulslike and that’s what’s expected. 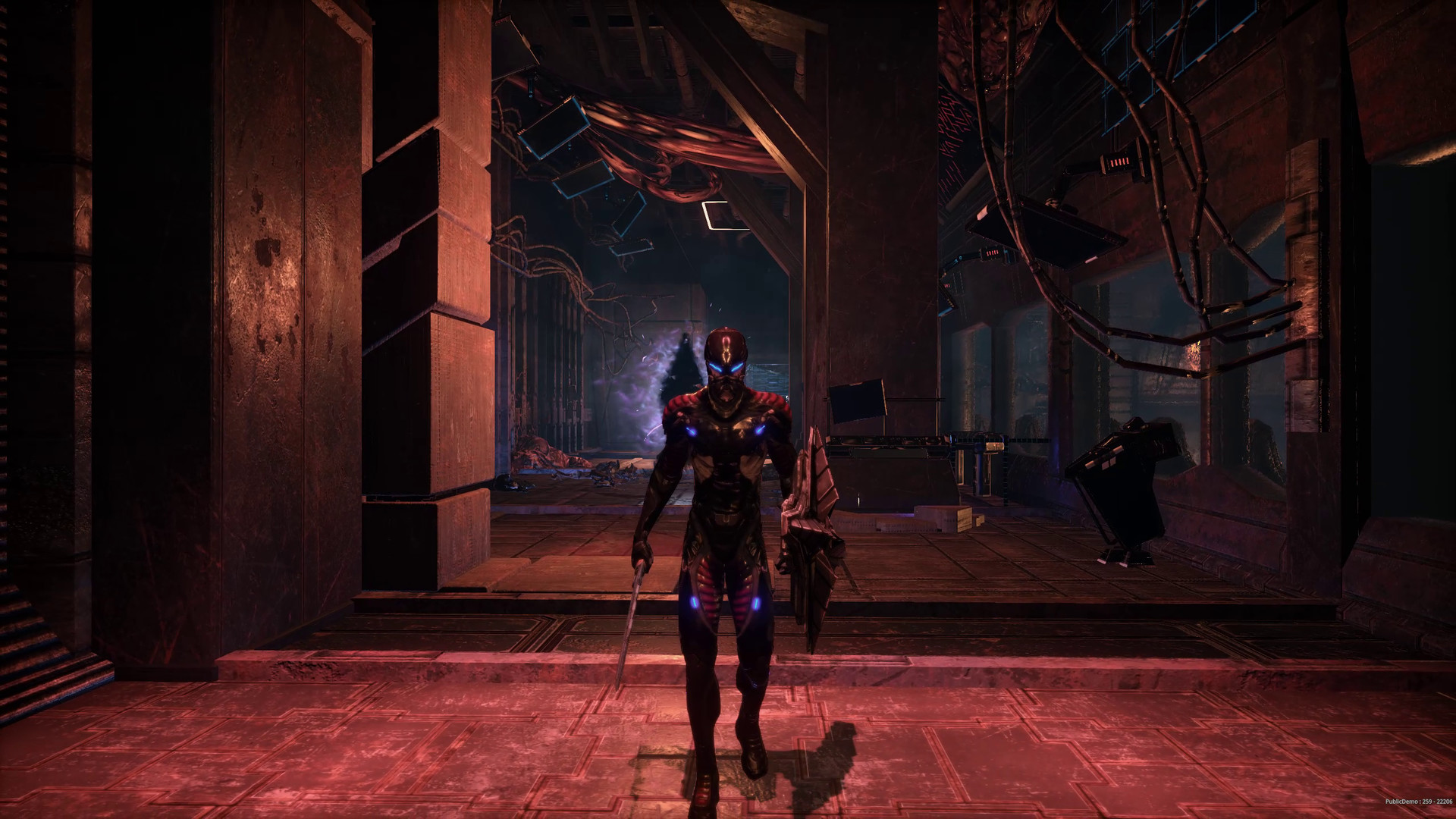 Hellpoint is set on a space station called Irid Novo, situated close to a black hole. As it rotates in its orbit, the cycle causes “Accretion Storms” to wrack the shadowed halls and spew hordes of zombie-like beasts and powerful demons into our universe. These storms are Hellpoints primary unique feature, but like everything else there’s little explanation as to why they occur or what their purpose is. And it’s only at certain points and in certain areas that they really make a difference. The rest of the time you’re facing off against the usual assortment of trash mobs and occasional big shielded brutes, magic-hurling demons, or savage beasts. Combat is pretty standard, featuring light and heavy attacks, a shield parry, ranged and magic options (later on) and a lot of walking forward slowly with your shield raised.

Hellpoint is fun to play; the action feels immediate and responsive, and mappable weapon skills (again, later on) give you a few cool offensive options. The problem is that we’ve played this game before. There’s a sense of familiarity to it all that can feel a little rote, which is jarringly juxtaposed with the game’s unwillingness to just open up and let you into its story. Even the bosses follow no real pattern and seem to just exist for you to fight. They don’t talk or drop meaningful loot beyond passports or keys to the next area, and killing them doesn’t have the satisfying sense of gratification that it should. 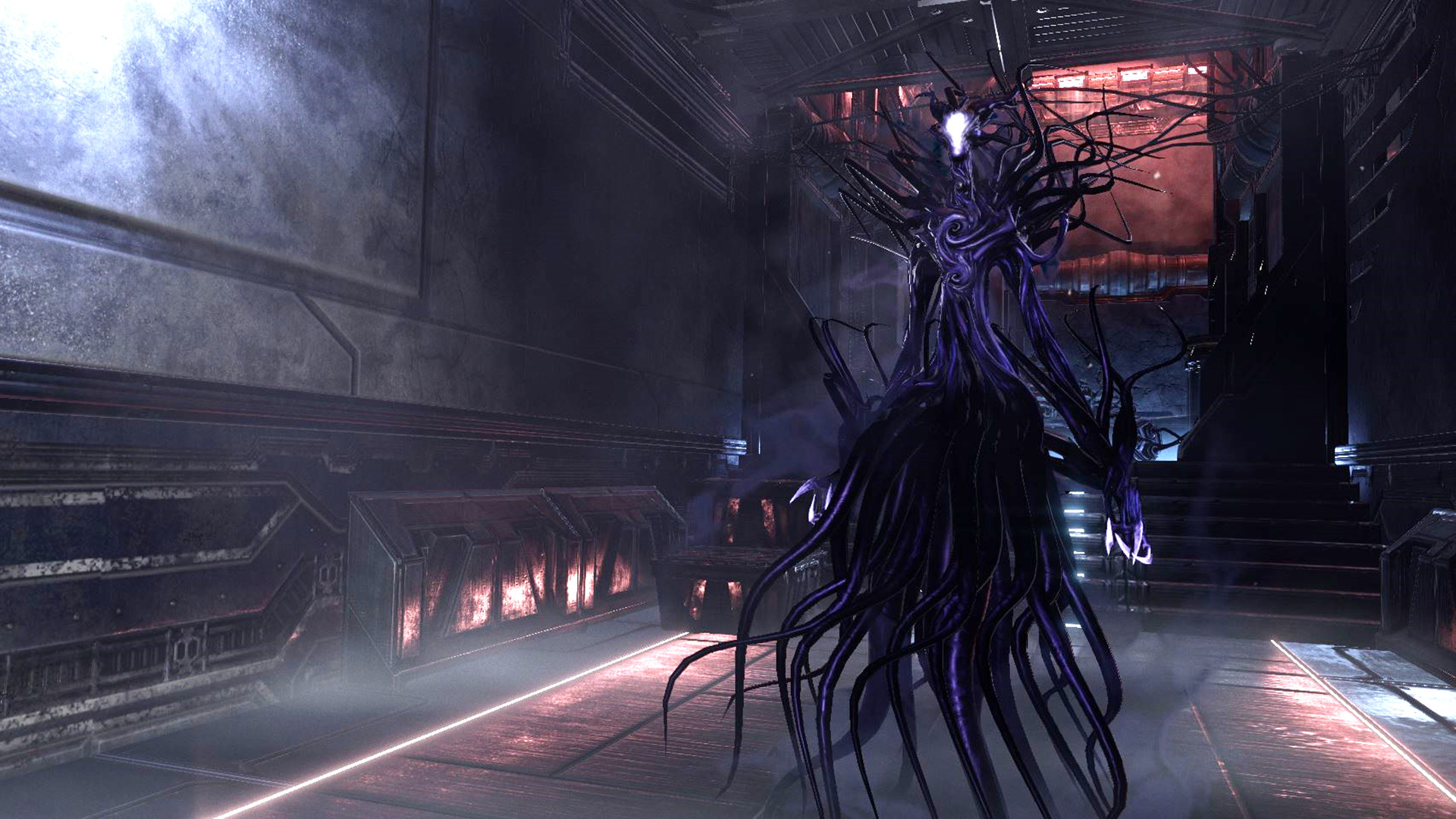 This is partly because most of the bosses are fairly straightforward fights. After a few attempts to learn their patterns, you’ll likely succeed. There are a few that steal the screen, but overall they don’t do an awful lot to stay in the memory. Take an early pair who work together against you. I don’t even remember their names, but one hurls magic at you and the other attacks with a huge censer. I was expecting an Ornstein and Smough experience, where one gets stronger when you kill the other, but that wasn’t the case. When I got their shared bar down to half, the melee guy just dropped dead, leaving me to pick the other one off with zero trouble. It was kind of a weird fight, and not nearly as grandiose as I suspect Cradle Games think it is. I should also point out that the run back to the bosses from the checkpoints are often far too long, and reaching them with full health and healing items is hard.

You save and rest at Breaches, some of which can be synchronised to allow fast travel. Here you spend Axioms to level up your stats, or can polarise or regress the universe with certain items, which makes the game harder or easier respectively. Using a Breach to level up does not respawn enemies, but dying or fast travelling to the Breach does. Also, you can’t restore your curatives unless you die, and can only refill health and energy (magic, essentially) by landing hits on enemies.

It’s a system that forces you to be aggressive, but you can’t overstock on healing items, so there’s little point holding onto your healing items unless you’re trying to get back to the boss in one piece. Although, depending on your weapon stats, restoring your meters can take a very long time, potentially leaving you vulnerable for long periods. 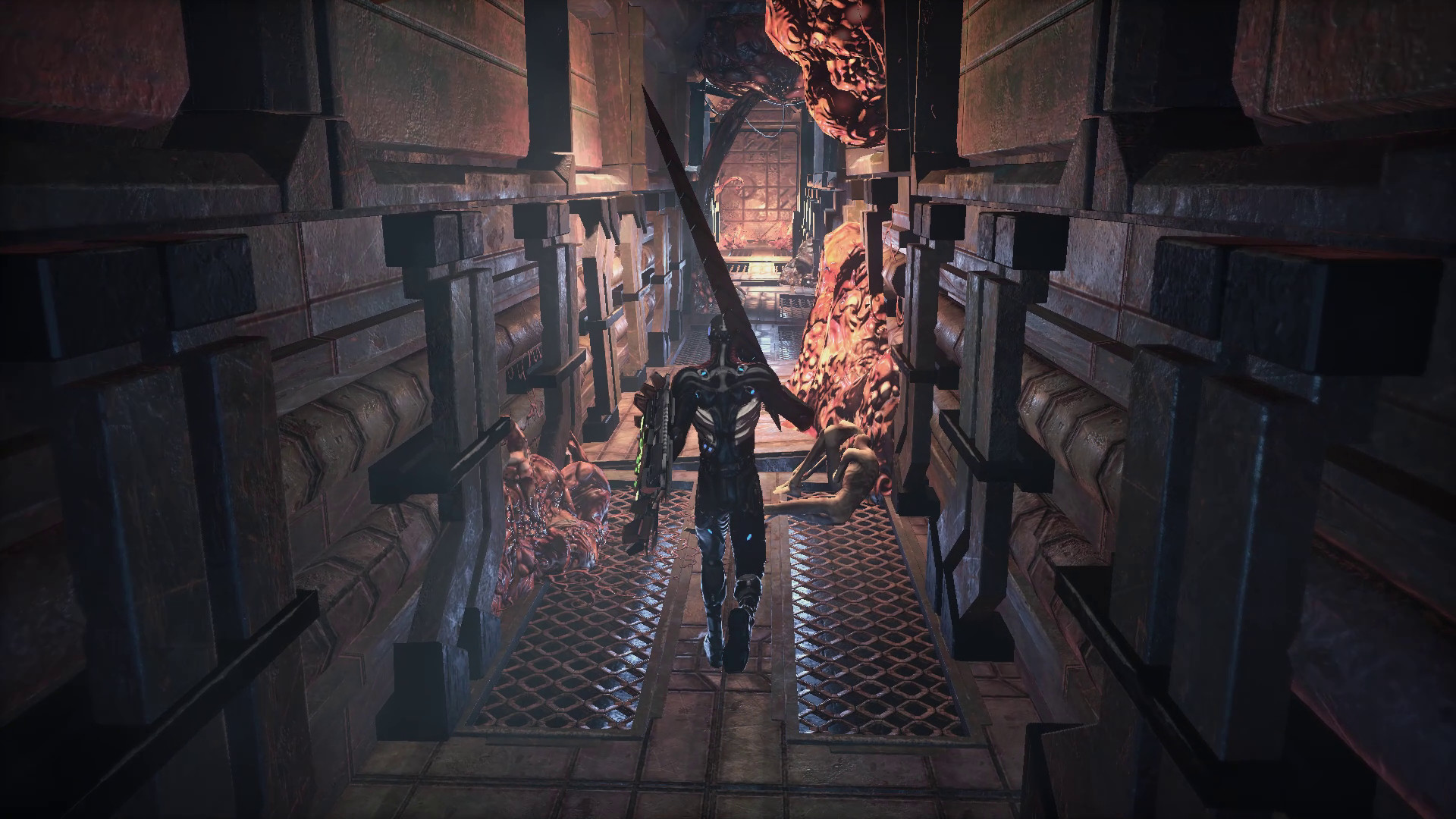 As with many games in the genre, exploration plays a massive part in Hellpoint. Upgrade stations and tech stations can be found to improve your gear and craft new weapons, but these are rare. Thoroughly exploring areas will yield armour sets, weapons, Axioms or items like upgrade modules or programs for your Omnicube. This little device can do things like teleport you to the last Breach you connected with or activate a light to cut through the gloom. It’s a nice idea, even though the Omnicube has no real presence and a simple menu could do what it does.

Green handprints scattered around will reveal hints, while yellow handprints are player-left messages that are mostly written in a bizarre code and are therefore utterly unhelpful. Blue handprints signify that anothet player wants help. Playing pre-release I only managed to join in with another player twice and both times we were quickly disconnected, so I was unable to test how well the system works, although it’s similar to Dark Souls in that you’ll usually stay in their world until one of you dies.

Death leaves behind your Axioms, and you’ll need to collect them again. During this time they can form a ghost, which is a green-tinged copy of you that will hound you aggressively until you kill it. It’s a super annoying mechanic that just gets in the way and costs you health and time when you just want to get back to the boss for another try. The player character controls well enough, although at times the target lock joins forces with the camera to kill you faster than the bosses can. Weapon and damage feedback are good though, and there’s a definite weight to attacks that makes combat satisfying and punchy. However, you’re easily stun-locked, and facing more than one or two enemies at a time will usually result in you being overwhelmed or dying due to the camera.

Visually, while Hellpoint’s world is an intriguing setting, it doesn’t do a great deal that we haven’t seen before. The “Hell in Space” aesthetic is something we’ve experienced in titles like Doom many a time, and while there are occasional vistas that will arrest your attention for a moment, there’s nothing in Hellpoint to challenge spectacles like Anor Londo or Cainhurst Castle. For the most part it’s technically smooth, although the framerate drops in certain areas, and enemies can get lodged on the terrain or glitch around a little in the distance.

Perhaps I’m being unfair on Hellpoint; perhaps it’s simply come at a time where I’m feeling personally fatigued with the genre. But having been blown away by Nioh 2 this year and super impressed by the Mortal Shell beta, Hellpoint just feels a little to safe and familiar to stand out. It’s a perfectly serviceable adventure with loads to explore and discover, some decent combat, a cool setting and plenty of bosses to test your mettle against. The problem is that it doesn’t do anything that feels new or daring, and it utterly forgets to add any real context or weight to all its apocalyptic posturing.

As with titles like Immortal: Unchained and Lords of the Fallen, Hellpoint feels like a game living in the shadow of its genre rather than thriving in its light, and as such fails to take risks or explore any genuinely new territory. But although it may not ultimately stick in the memory for long after you’re done, for a lower budget title it’s a solid enough challenge that will keep fans of the genre busy for a while.

Bosses are forgettable
The camera is frustrating
Nothing has context

Hellpoint may not ultimately stick in the memory long after you're done, but it's a solid enough challenge that will keep fans of the genre busy for a while.