previous
Differences between online and land-based bingo
random
next
The Winter update to the Yu-Gi-Oh! TGC is here.
0 comments 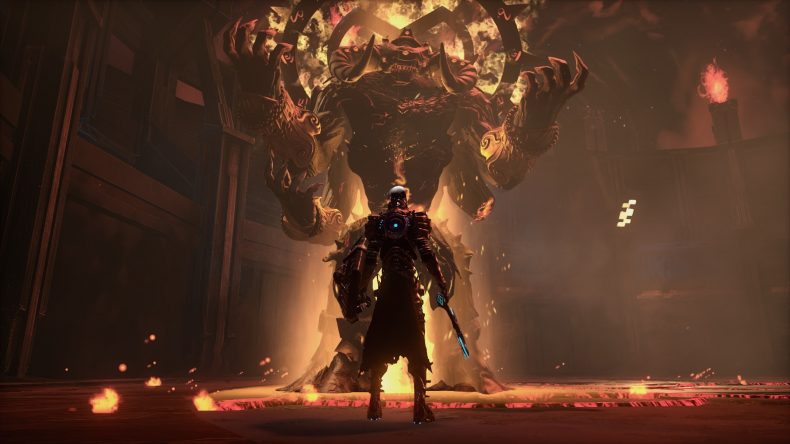 It seems these days you can’t throw a stone without maiming at least three Soulslikes – that is, games that ape two or more of the core mechanics seen originally in From Software’s Demons Souls, those mechanics being extreme difficulty, enemies that respawn when you die, and giant bosses with health bars longer than a roll of toilet paper and cool names like “The Gaping Dragon” or “Ceaseless Discharge”.

The genre itself has been on something of a whirlwind tour of industry-standard video game themes, too, having featured killer robots in The Surge, vampires in Code Vein, 2D platforming in Salt & Sanctuary, an apocalyptic hell-scape in Remnant: From the Ashes, and whatever the hell Immortal Unchained was. Beginning life as a “Spawn” hatched from a cryo-tube, you’re thrust into the Hellish world of Irid Novo, a huge space station-slash-prison poised just beyond the event horizon of a black hole where a bunch of scientists have been attempting to awaken “Cosmic Gods” (because that always ends well). Why you’re there is unclear, which is actually something of a letdown. Usually these games have a clear enough reason for wanting you to push through their countless challenges and keep improving. Hellpoint simply wants you to do as you’re told.

Giving you a crudely fashioned weapon and shield, it gives you the vague instruction to find the Observatory and then sets about trying to separate your head from your shoulders with a variety of low-level nasties. That said, my first death came not in the heat of conflict but in misjudging a small jump over a big hole – upon which I was returned to the nearest “Breach”, or bonfire by any other name, where I would return regularly from that point on to spend the Axions I had gathered to level up. Quite unsurprisingly, the Axions I’d been carrying before my fatal slip ‘n’ fall were waiting for me at the scene of my demise. The fact that the Black Hole is literally Dark Souls‘ darksign in space (seriously, look at Hellpoint’s artwork) isn’t the only thing that evoked From’s series. Combat feels almost mechanically identical, with similar controls and a familiar weight and heft to weapons and movement. A stamina bar limits your dodging and attacking, and your limited healing items can only be replenished either through death or by dealing damage to your enemies. Simply returning to the Breach doesn’t work. Likewise, you can’t simply fast travel to and from a Breach, even after you unlock the huge central one in the Observatory. You instead have to find stabilisers that lock open the pathways for fast-travel.

Weapons and armour are in short supply, too – or they were in the demo section I played. I found only one set of armour, which didn’t look very impressive when I wore it, a fact not helped by the protagonist having the kind of physique that necessitates him running around in the shower to get wet. But in timeless Souls fashion, I felt automatically better once I’d found some armour and a few weapons to experiment with.

Flavour text found on items (because Soulslike) hints at a magic build although I found nothing that allowed me to use anything other than physical weaponry – although I did collect a rifle that I couldn’t use because one of my stats was way too low. Hopefully this will be addressed because despite not wasting any skill points from levelling up (a system what works almost exactly like it does in Dark Souls) I was only able to use the melee weapons. Anything else would have required me not to spend points in health or stamina and I’d have been super-dead. Perhaps the coolest addition to the formula is one that could potentially make speed runs quite interesting. At set intervals the “eyes” with which the Observatory, well, observes the Black Hole align (twice a day, although I don’t know if that’s in-game or in real life) and an Accretion Storm occurs, puking new demonic enemies onto the station for a limited time. These enemies are very challenging, offer a ton of Axions, and bring an air of unpredictability to the world – at least for the first few runs. Also, Hellpoint has secrets hidden everywhere, from alternate routes and secret switches to hidden pathways and environmental puzzles. It makes exploring its dark, macabre world much more enjoyable.

Of course, Hellpoint wouldn’t be a Soulslike without the inclusion of big scary bosses and there were a couple present in the demo. The first is a floaty ghost lady who whips you with lightning, but who I didn’t find too hard to kill if I kept strafing around her and only counter-attacking. She was dead on my fourth attempt. The second boss, the Celestial Beast, took longer. A cross between the Xenomorph from Alien and the Moorwen from Outlander, it roared like a lion and hit with serious force – but again, strafing and waiting for an opening worked. Neither boss felt particularly clever or memorable, but it’s early days.

Hellpoint has a lot going for it, and I only really scratched the surface in the demo. If the rest of the game opens up like this small chunk, filled with secrets and alternate paths, optional bosses and stashed loot, the exploration will easily make up for what at the moment feels like slightly underwhelming combat. It does come close to Dark Souls, but it needs some serious work where hitboxes and I-frames are concerned to make it feel more balanced.

The aesthetic is cool, the enemy design I’ve seen ranges from boring zombie mobs to huge glowing hellspawn, and it captures the sense of scale it shoots for. Is it going to topple Dark Souls or Bloodborne from the throne? No, I don’t think so, but with a bit of work and some improvements to the combat and encounter design, Hellpoint could prove to be a contender to the crown on at least the same level as The Surge 2 and Code Vein.

Senior Content Editor Mick has been playing games for over 30 years and writing about them for around 12. After drifting from site to site for a while, settling briefly at the now-defunct Made2Game and freelancing for the gone-but-not-forgotten NintendoGamer Magazine, he came at last to rest at Godisageek. Mick has been a reviewer, staff writer and content editor here for some time, while also moonlighting a little for Red Bull Games. He has 4 kids, has written 2 novels, and sometimes even manages to pay a bill or two. You'll usually find him defending the galaxy in Destiny 2, battling evil in Diablo 3, or lurking in the background on Twitter. Find him there @Jedi_Beats_Tank, or on XBL (JediWaster247), PSN (Jedi_Waster) or Nintendo (JediWaster).
MORE LIKE THIS
Cradle GamesHellpointtinybuild