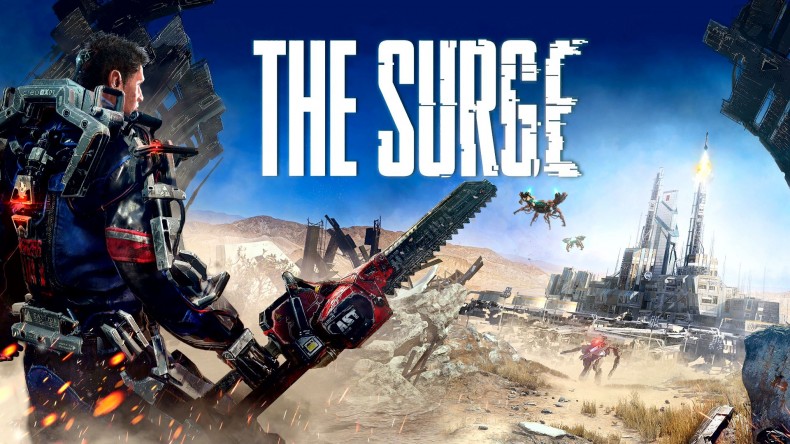 Many games have tried the Dark Souls formula, but few have quite managed to replicate the experience with similar success. In 2014 Deck13 Interactive released its own take on the sub-genre: Lords of the Fallen. Arriving to decent reviews (mainly sevens), it tried something a little different, almost arcadey even, giving it its own identity as a result. Now, Deck13 is back with yet another new take on the Souls sub-genre, this time moving well away from ye olde fantasy and into the dystopian future of The Surge.

You play as a man named Warren, who has come to a company named Creo in order to find work. This leads to an interesting class choice scenario. Instead of simply navigating a menu, you come across two job choice chambers; one is for the light armour class, the other for heavy. It’s a simple thing, but it just helps keep you immersed in the world from the start. After making the choice, things go spectacularly wrong for poor Warren, and he finds himself left for dead in a scrapyard.

I must admit to being disappointed with this opening. Not because of how it plays out, but rather because Deck13 has again forced us to play as another dull, uninteresting character. Lords of the Fallen stuck us with the boring meathead, Harkyn, and now The Surge lumbers us with the equally bland Warren. Yes, it’s probably a bit harsh to criticise it for this, but I’d hoped that Deck13 might have listened to player feedback for this new game. This uninteresting design is carried over to most of the enemies too, unfortunately. Most are simply humans gone mad, clad in exoskeletal armour, and you grow tired of their identikit designs by the end of the first section. So when they show up again in the second area, only in slightly different armour or wielding heavier weapons, you can’t help but let out a resigned sigh. The interesting enemies don’t really show up until about halfway through the game, but tend to be far too dangerous to fight. Rather like the black knights of Dark Souls, only without their intelligent fight patterns. These machines are more agile, harder to hit and they pack one hell of a punch, and those are just the first wave of new, more difficult foes that begin showing up later on.

But what kind of game is The Surge? How does it play? It’s a straightforward action-RPG Souls-like, with light and heavy attacks (only they’re horizontal and vertical attacks here, which works very well in the right situations), dodges, and blocking. You have a stamina bar which needs managing, making combat a strategic affair, and the high difficulty means that it’s also a tense experience. Enemies do plenty of damage and you have limited healing injections, so you really have to be careful when exploring the various environments. Nothing exactly unique there.

Every area has an Ops Centre (there are no bonfires in the future) and there you can level up and do various other things. Warren is equipped with a rig, in the form of a metal exoskeleton, and new pieces can be found throughout the game. You can build and upgrade these at the Ops Centre, and upgrading the rig’s core (leveling up) gives you extra slots for your implants. Implants come in many forms: extra healing injections, maximum stamina, and health increases, and many more. But each one uses up core energy, as does each armour piece on your rig, so it becomes a balancing act to keep yourself protected and still use the right implants to suit your style of play. It all sounds much more complicated than it actually is, and the only real way to discover any of this is via trial and error, because the game damn sure doesn’t bother to explain any of it to you. Visiting an Ops Centre replenishes your healing injections and allows you to spend the tech scraps dropped by enemies in order to level up, etc. but it also has the added caveat of respawning any enemies you’ve killed on your travels. There is also only one Ops Centre in each area, but there are always several shortcuts to unlock along the way, which creates a real sense of inter-connectivity to each zone. You’re guaranteed to have at least one or two “oh shit, that’s where that leads?” moments in your time with The Surge. You’ll breathe a huge sigh of relief after particularly tough sections, when you find the shortcut that negates having to go through that nightmarish journey again. It has some very clever level design.

The levels aren’t just designed well in terms of their layout, they look the part as well. The opening section is all dust and corroded metal, being on the edge of civilisation, and things begin to get cleaner and cleaner, the further you get into Creo’s complex. The lighting and shadows are superb, adding an extra layer of atmosphere to a game that already has you on tenterhooks, creeping around each new zone. Getting in close to characters doesn’t yield quite as impressive results though, as textures are pretty low resolution. It’s actually quite noticeable on Warren and that’s a shame, given how well everything is actually designed. Except the corridors. So many narrow corridors that don’t suit the combat at all, leaving you open to take so much damage that it borders on the unfair. This highlights just one of the issues with the combat in The Surge, and there are a few others, to boot. Most of the time, having a good ol’ scrap with someone is tense and fun, as you dart in and out of their range, timing your attacks carefully, but then, sometimes it doesn’t matter how carefully you time your swipe or stab, because your foe will simply ignore the impact and hit you through your attack animation anyway. I can forgive this during the early game because the damage isn’t as high as it could have been, but when you’re thrown in with the sharks (not literal sharks) around the midpoint of the adventure, some of those enemies can kill you in one combo. The security fellas with their staffs have a combo that staggers you with one hit, removing half your health, then follow up with an overhead that your staggered form just cannot avoid. Instant kill. It’s infuriating when you’ve been wandering for over half an hour, searching for that life-saving shortcut back to Ops.

The Surge does have an ace up its sleeve, that at least sets it apart from the competition, in the way you procure new weapons and armour. There are no random drops here, rather you have to target individual parts of your enemy, weaken that area and then use a finisher to cut off the part you want. This leads to a spectacularly bloody end, and you’ll also pick up a broken piece of armour. Take that back to the nearest Ops Centre and you can build your own version, or even upgrade it if you have the relevant parts. This also leads to a bit of a risk/reward scenario at times; do you go for that potentially better chest piece, which will take more hits to get the kill, or go for an unarmoured area and take down the enemy with less damage to your health? It certainly adds an extra dimension to the gameplay, increasing the tension in an already nerve wracking situation. These are the moments where The Surge gets it right.

The same can’t exactly be said about the bosses. My fellow ‘Geek writers have been subjected to my frustrated rantings on a number of occasions, when I’ve been battered for the umpteenth time by another one-hit-kill. To say that I’ve had a love/hate relationship with The Surge’s bosses is a monumental understatement. There is great variety in these epic bouts, with one in particular testing my skills to their limit through its three-phase battle, and their designs are mostly quite unique. It’s a shame this varied design isn’t present for the regular enemies, though. Good points aside, the combat issues are even more pronounced here, as any hits you take will cause more damage and even more deaths, which are worse when the runs to the boss can be pretty brutal. But special mention has to go to a late boss, one that I wasted nearly three hours trying to kill, only to find out that it required a horribly obscure, gimmicky solution. Quite honestly, it was a case of poor design and one that threatened to bring my playthrough to an abrupt end.

Luckily, this was a one-off problem, and I was able to continue. That said, continuing isn’t always straightforward, due to a lack of direction in the story. There’s plenty of background lore to discover through audio logs dotted around the complex, and there’s intrigue flowing through the main narrative, but sometimes you’ll find yourself wondering where you’re supposed to go next. You’re rarely given direct instruction, and the game itself doesn’t have the intelligent art direction that can subtly nudge you towards the next objective, but trial and error is often a part of these experiences so it can be at least partially forgiven.

My time with The Surge was filled with mixed feelings, but the positives do outweigh the negatives. Despite the combat issues and awkward (mostly absent) direction, I had fun exploring the dystopian future of Deck13’s world, battling its bloody violent denizens, and meeting its various survivors. It’s not going to win any awards, but it’s got a certain dark charm that Souls fans might just enjoy.

The Surge offers an interesting world to explore, and a few new tricks that set it apart from the competition, but often falls short of its inspiration due to wonky combat and uninspired enemy designs.

Deck13 and Monolith of Minds announce Resolution due out next year