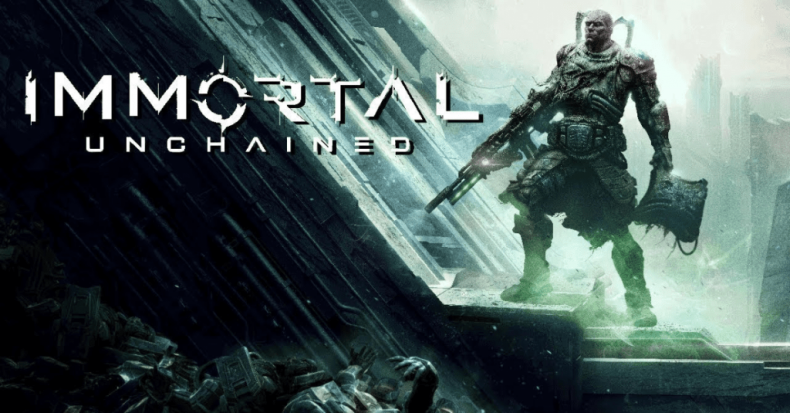 You’ve got to hand it to Toadman Interactive: for an indie studio with fewer than 20 staff members, tackling a title like Immortal: Unchained is incredibly ambitious. Ballsy, even. It’s even more praiseworthy when you realise that not only did they challenge themselves with creating a memorable game in an increasingly-overcrowded genre, but they also mostly succeeded.

Immortal: Unchained is a long way from perfect, and falls somewhere short of the polish and finesse of many of its genre-mates, but its issues are inherently fixable, and I only hope that it’s successful enough to afford its developers time and resources to put it right, or a second run at it in a sequel.

It’s either set in the far future or another galaxy entirely, but the primary premise is that an ancient evil once thought vanquished has arisen to lay waste to the star system and things have gotten so dire that the only hope for survival lies in the hands of an immortal prisoner who has been locked away for centuries. Awaking in your sci-fi gaol, you’re guided by a mysterious cloaked figure who implores you to escape. The character creator isn’t particularly exceptional given that, aside a handful of flourishes, you’ll always look like a thrash metal punk from an early-nineties action movie (and there’s really barely any difference between genders), but you do get to choose a starting class that determines your initial stats and weapon pick-ups.

Classes such as Wanderer and Raider distribute attribute points across the standard RPG skill ladder, upping passive abilities such as Strength and Endurance according to a preset table that borrows heavily from Dark Souls. As you progress you’ll collect Bits, which you bank at obelisks to level up. And just like its Soulsborne cousins, Immortal makes you reclaim your lost Bits every time you die.

I mentioned Dark Souls, but really Immortal: Unchained occupies a bumpy middle ground somewhere between Lords of the Fallen and The Surge, only with guns as the primary weapon. Oddly, this particular element is both Immortal’s greatest strength and most damning weakness. It’s a strength because it’s very different. Even The Surge, which could easily have added gunplay to the mix, mostly stayed away from it, but Toadman go for it, filling their game with over a hundred ranged weapons. There’s melee too, as you’ll find dual-wielded blades, axes, clubs and hammers; but this is so limited it almost feels like an afterthought to get you out of a tight spot as opposed to a viable build option. Following a standard third person shooter scheme, the left trigger brings up the crosshair and the right shoots, and the actual shooting, feedback and all, feels very good. Enemies don’t drop to headshots as there’s still a degree of RPG number-crunching going on, but melting cyborgs with carefully sustained assault rifle fire is always fun. A target lock helps with all the constant strafing and evasion-rolling, maintaining a recognisable Souls-like atmosphere at all times.

However, the reason guns are also major weakness lies with reloading and ammo conservation. You will burn through ammo very quickly in Immortal: Unchained, and so you’ll find yourself hitting reload a lot. The problem is that the enemy never stop shooting and rarely stay in cover; you’re constantly being advanced upon, fired upon, and trying to reload. Nothing major, you might assume, but getting hit will jolt you out of the reloading animation, as will evading. Your single viable option? Run away and try to reload before the enemy can start shooting again.

It’s horribly counter-intuitive, and you can take so few hits before death that it’s a steep enough challenge without this – at least let us reload while dodging, Toadman! Because honestly, besides that, the combat is pretty good fun. There’s a grimy weight behind everything you do that makes most encounters feel satisfying enough, although the lack of a proper cover mechanic feels like a bit of a fumble. Fair enough if you can’t hide from bosses, but there’s so much available cover in every area it seems remarkably stupid not to ram yourself up against it. It’s fair to say that Immortal: Unchained doesn’t make a great first impression. The opening area is depressingly bland, especially given how weak you are and how many times you’ll be forced to retread it. Later, you’ll spend time in other locales and some of them, in particular a lush green forest, would have made much better opening areas. Everything is just so grey and drab and low-detail in the Hidden Vault, and I found it genuinely affected my mood when playing. Likewise, the first boss is a huge challenge, able to stun you with one hit and kill you with the next, and the short run to him past the same respawning mobs through the same lifeless rooms is borderline soul-crushing. Once you’re through it the game begins to open up, but until that point you’ll just have to grin and bear it. It does get better. Sadly, though, it can be a fairly janky experience at times, with noticeable slowdown, weird rag-dolling, and a lot of texture pop.

Immortal: Unchained is an ambitious leap into a crowded, niche genre that just about works. Toadman’s take on the Soulslike formula is interesting, and has enough new ideas to stand out. It’s just a shame that it’s so janky, and so hard to look at for the first few hours. There are a lot of smaller issues such as the reloading that I hope will be fixed at a later date, because if they are Immortal: Unchained could be a force to be reckoned with.

An ambitious venture for a low-budget indie studio, but one that manages to stand out in the crowd despite its flaws.