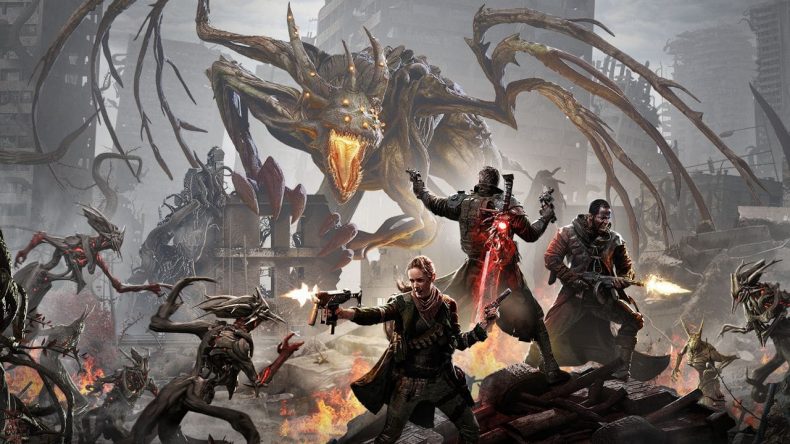 Thinking back, Darksiders III’s move to a Soulslike now makes sense. Gunfire’s newest game, although not necessarily similar in raw gameplay to the third Horseman’s outing, is a passion project for the studio and also happens to be a Soulslike. Remnant: From the Ashes begins with your custom character riding the waves of a storm on their tiny boat, attempting to reach a mysterious tower on a nearby coast. A massive, skyscraper-sized wave puts paid to that mission however, leaving your poor avatar washed ashore just out of reach of their ultimate destination.

You awaken in the ruin of an old coastal city, nothing but chain link fences, concrete and the gutted corpses of vehicles for company. Well, that’s until the strange creatures show up, attempting to tear your innards out. Luckily, your old, battered sword washed up with you, allowing you to fight your way to the sounds of battle up ahead. After a series of events that sets out the stall for the rest of the game, you are brought into the humans’ safe haven of Ward 13. This will be your hub for the foreseeable future, where you can upgrade and buy new weapons, armour and other things to help keep you alive in your travels. It’s also full of NPCs that will help flesh out the story for you, if you fancy a chat. Now, this is the part where things will sound a bit odd. Remnant: From the Ashes isn’t your average Soulslike, it doesn’t even take away your experience when you die. If that makes you wonder what’s going on, activating checkpoint crystals will still repopulate any creatures you’ve killed in the area. Except bosses, of course. That would be downright evil.

So, how does this game work? Well, think about if Bloodborne, Diablo and Destiny had a baby. I’ll let you figure out the logistics of that for yourself. You have the RPG ideals of those games: levelling up your characters through combat and choosing the right gear and weapons for your playstyle. You have three separate classes in the Hunter (mainly ranged), Scrapper (up close and personal) and the Ex-Cultist, who plays more of a support role but can still hold their own in a scrap. Speaking of which, scrap is where the Diablo looting comes into play, albeit in a hybrid sense, mixed with Bloodborne’s blood echo gathering.

As you explore the world (or worlds, more accurately) of Remnant: From the Ashes you’ll gather scrap and ammo from the enemies you kill, on top of the experience gained. Smashing boxes and opening crates/chests will see you finding more scrap, as well as things like iron that is used to upgrade your weapons and armour. Occasionally, you’ll stumble upon weapons and armour pieces throughout the world, too. You then warp back to Ward 13 using a checkpoint crystal, and there you will be able to upgrade your weapons and armour using iron (and other items, as you upgrade to higher levels). You’ll just have to pay a small scrap fee to do so. You can also craft boss weapons using unique materials dropped by certain enemies, as well as increase the number of Dragon Heart uses you take with you. Think of that like Estus in Dark Souls, because we needed a fourth game for comparison, didn’t we? It gets a little more complicated too, as you level up. You earn a trait point to spend with every level-up, or through rare tomes hidden within the worlds, beginning with simple ones like health and stamina upgrades. As you reach certain milestones within the story, or through co-op play, more and more traits will be added to your repertoire. These offer extra armour, ranged protection, elemental protection, even bonuses for playing in a group, and they all add up to creating a character that reflects your style of play, provided you have the trait point to upgrade what you want. My Hunter was adapted for quick escapes and quicker reloads, to keep her on her toes and away from the claws and blades of the Root, but she was also handy with a hatchet if things got a little too close. She could even summon limited help, via a gun mod.

Yep, more customisation. Gun mods can be crafted in Ward 13 or discovered throughout your travels, and they’re charged through use of the guns to which they are attached. Only two guns can be equipped at any one time, but with the right mod slotted into each, you can turn the tide of a battle with well-timed usage. Or, in my case, you can often forget they are there until it’s too late, because I’m an idiot.

The thing is, this may be a strange mix of several games across multiple genres, but the end result is entirely its own thing. And it’s damn good, with a depth that easily rivals that of the games from which it borrows. There’s a story in there that is told through proper scenes and dialogue trees, rather than the FromSoft method of making you sift through item descriptions and vague environmental storytelling. Or worse, Destiny’s Grimoire nonsense. That being said, items do still have cryptic quotes attached to them, that are simply optional additions to the story already being told. There are texts found throughout the game that hint to other events and sometimes give you a glimpse into story beats that have yet to be reached. I’ve enjoyed a lot of those games inspired by FromSoftware’s Dark Souls. Honestly though, Remnant: From the Ashes just struck a chord with me, and its particular brand of shooting, slashing and exploration drove its hooks into my brain and wouldn’t let go. Exploring a ruined earth and trying to rid it of the corruption of the mysterious Root was intoxicating. This strange organism and its hive mind are so interesting, especially as you progress and start learning some of its secrets.

As an enemy, the Root is also full of variety. They all look like twisted versions of humans, with the exception of certain critters, and you’ll need to use a mixture of melee and ranged attacks to deal with each threat as it presents itself. On top of the regular enemies, before we even get to the bosses, every now and again a special Root will spot you and the only warning you’ll have is a piercing sound cue, before the onslaught commences. The first time this happened to me, I was most certainly not prepared. The mysterious form appeared, shooting arrows and whatnot, and I managed to fight it off with a bit of difficulty. Job done, I thought. But no, suddenly the sound cue returned and I turned around to see a towering monstrosity stalking me, swords deflecting every shot I fired. Unprepared as I was, death soon found me in my panicked state.

These kinds of enemy encounters become more commonplace as the game goes on, with more and more powerful creatures emerging to impede your progress. You might think that not losing XP upon death would reduce the tension of a game like this, but these special encounters ensure that you stay on your toes. Checkpoints mercifully appear at the start of most new areas and dungeons, but reaching them is often harder than you expect. Until the game knocks you around a bit, forcing you to learn. What about those bosses I mentioned, then? Again, thankfully checkpoint crystals tend to sit outside the fog doors of boss encounters, to avoid the frustration of agonising boss runs that any Soulslike fan will have learned to despise. You might not actually fight every boss, as Remnant: From the Ashes is made for repeat playthroughs and it’s actually impossible to see everything in one run. It also likes to mix things up, as bosses aren’t always a single, large entity. In fact, one is closer to the house defense in Resident Evil 4, as you protect an NPC for a couple of minutes against an onslaught of Root. You might groan at the thought of a protection section, but it’s a lot more fun and tense than you first think, as bigger and more powerful Root begin ignoring you and run straight for your companion. Another boss is a giant Cthulhu-esque Ent, which required a lot of running, gunning, careful target choice and some cunning stamina management. Or luck, whatever. Took me a few attempts too, but I always wanted to keep trying.

The best example of wanting to keep trying was when I was joined by a couple of other players, as this game is meant to be better with up to two other friends, or randoms. I’m not convinced of that, as I thoroughly enjoyed my time alone and with others (stop giggling, you filth). Though co-op could do with emotes for communication, as nobody seemed to like using mics and there was no way to communicate otherwise. You can choose to play your game completely offline, in an invite-only session, or completely public, which allows people to drop in and out of the game as they want.

Myself and two others were taking on a boss area, in which we faced a veritable swarm of assorted murderous creatures. The more players, the worse the swarm. It must have taken us around eight or nine attempts. We found ourselves constantly outflanked, outmatched or simply outnumbered, unable to even help each other up when downed, in some cases. Yet, each and every time, two of us got right back up at the checkpoint and went back in for another round. One player got fed up after two rounds, but was eventually replaced by another, who helped us to victory in the end. Through a mixture of simple stubbornness and the sheer fun factor of trying to overcome any challenge in this game, we eventually got our reward…which turned out to be a dead end vault containing a new weapon, instead of progress. But you know what? I was happy with that. It gave me the chance to return to the previous area and try another route, further allowing me to continue exploring a world that had really shown me the variety of the environments.

Remnant: From the Ashes has enormous depth, and a story that can still be followed without delving into the lore. It’s a game with a great core loop that will keep you coming back for more, which is especially important in a game that requires multiple playthroughs to see everything it has to offer. If indeed you ever do see it all. Most importantly, Remnant: From the Ashes is just a damn good action RPG.

No way to communicate in multiplayer without mics

Remnant: From the Ashes is an interesting mashup of genres, ultimately creating an experience that can stand alongside even the best Soulslikes