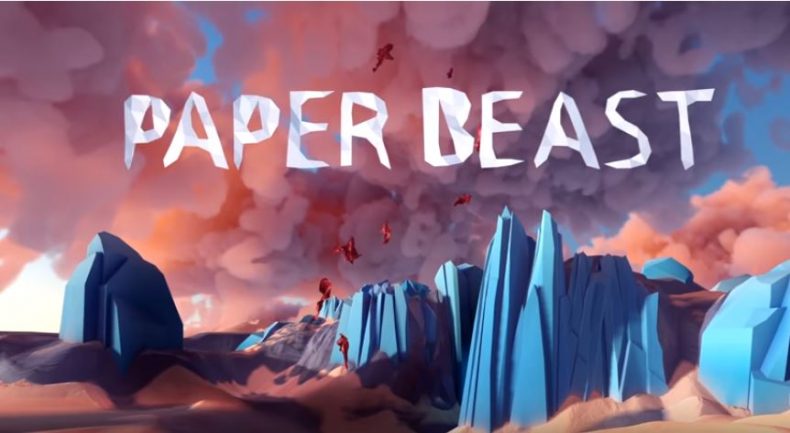 The world that exists within Paper Beast affected me in a way I wasn’t expecting. You’re soon thrown into a pastel-coloured landscape filled with sand and rocks, inhabited by a small family of paper giraffes. As the parent watches over them, you playfully toss them some food, making sure both of them get a fair share of the grub, whilst learning the fundamentals of the controls. You move in short turns, pick items up, and teleport across the landscape. There’s never any guidance, allowing you to ease into the game, but those serene moments playing with the origami giraffes soon take a darker turn.

Paper Beast is a game from the mind of Eric Chahl – the man behind Atari classic Another World – and for saying this is his first  game since 2011’s From Dust, it’s rather wonderful. It’s a puzzler at heart, with shades of Journey thrown in to provide the poignancy of the adventure. You become invested in the various animals, watching how they interact within their own biomes, and also those they’re not familiar with. Not everything is friendly, and with the surreal undertones of the story, you’ll soon work out that nothing is as it seems. After an hour or so, when looking down onto the desert from on top of a mountain, an injured animal drags his body through the sand to spell out “this is not a simulation,” letting you know there’s something sinister going on. The majority of the puzzles are easy to solve. You may come across a scenario that gives you no clear solution, but it’s one of those games where you kick yourself as the answer becomes clear. You may need to melt some ice to clear a path, tether some giraffes to huge crabs during a blizzard, or raise water levels in a pool so you can freeze the water and get across. There’s plenty to get your head around in Paper Beast, and it gives you plenty of tools to get where you need to go.

The controls are simple, whether you choose to use the DualShock controller or the Move controllers, but there are times when grabbing objects became awkward. There’s one puzzle where I needed to throw sand at a slippery surface so some metallic giraffes could climb up. Like other animals, these couldn’t simply be picked up, so I needed to throw huge balls of sand at the mountainside. Picking up the large clumps of sand wasn’t an issue, but making them stick in the correct place took time. The animals were trying to climb up many different ways, and pulling them into position became a problem. The concept of what I needed to do wasn’t an issue, but the execution was.

Although there were a few issues with controller responsiveness, the game is beautiful in VR. The basic palette reminds me of Another World, and the paper animals are intricately designed, not just in their aesthetic but in the way they live and breathe. What really stands out is the music. It’s a relaxing mix of string arrangements that walk with you as you make your way through the game, rousing in the more moving scenes with the capability of bringing a tear to your eye. There are moments when you’re looking down upon the valleys whilst riding in a hot air balloon, watching the herds of animals you’ve just saved, feeling a sense of achievement as you travel to the next puzzle. Some environments are beautiful, others are menacing, but all have a person touch that’s got Chahl’s name all over it. Despite Paper Beast’s issues, it’s a beautiful adventure that never forces you to rush, giving you all the time in the world to enjoy every aspect of it.

Paper Beast features a moving story which allows you to experience it up close. The puzzles aren’t too challenging, but there’re enough of them to keep you entertained, and the game’s soundtrack is thoroughly captivating. Whilst bigger games like Animal Crossing: New Horizons and DOOM Eternal are taking up the limelight, Paper Beast shouldn’t be a game that passes you by.

Controller responsiveness is an issue
Some puzzles aren't challenging

Paper Beast is a wonderful puzzle game that features a stunning sondtrack, a poignant story, and some tender moments that leave you breathless.