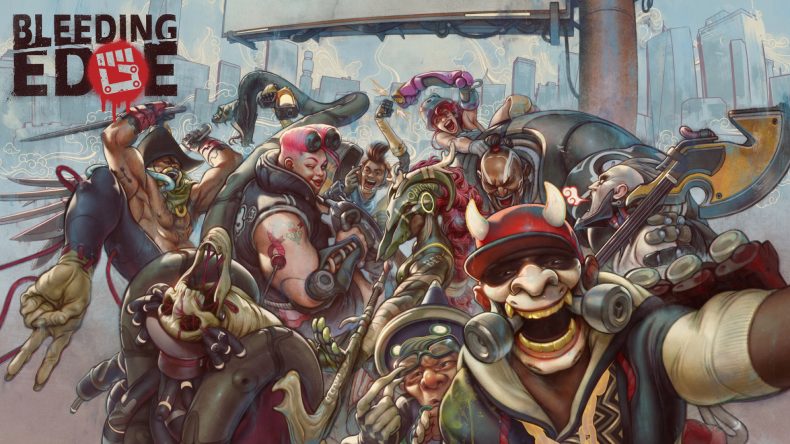 Back in the simpler time of 2015, Overwatch blasted its way into the hearts of multiplayer FPS fans. With its colourful art style and charismatic cast of characters, the Hero Shooter genre was born. Since then, many have tried (and much less have succeeded) to follow in Blizzard’s footsteps. Fortunately for Ninja Theory, their background in character action games means that Bleeding Edge has a focus on melee combat to differentiate itself in the market.

You can play as any of 11 (at the time of writing) augmented heroes, who battle it out as part of an illegal fight club for entertainment and fame. You’ll be fighting as a team of four to keep control of objective points, or to collect power cells and drop them off at collection points. Teamwork is crucial if you want any success capturing objectives and attaining victory. The characters are sorted into three groups: damage, support, and tank. As you’d expect, damage characters deal more damage, tanks can take more before falling, and Support characters are used to heal and buff everyone else. Each character plays entirely differently to the others, with an array of attacks and abilities at their disposal. There are melee characters, ranged characters, healers, and stealthy characters. Learning the play style of each of them is a daunting task, but depending on your skills you might find more success early on with a character that wouldn’t be out of place in the genre you’re most comfortable playing.

The heroes play like any character action game character should, with the ability to dodge and parry incoming attacks. This leads to some tense battles against foes, where you’ll be predicting their next move and reacting accordingly. With so many different potential match ups, you’ll need to learn what abilities work best in each situation. This could be trapping a fleeing healer in a cage, buffing an ally to take on multiple foes, or even turning invisible to escape conflict. It’s incredibly satisfying when you outplay the enemy team, and one ability or super move from a specific character can change the tide of battle.

The colourful cast are charming, representing a range of countries, ages, and body shapes. From a hyperactive Aussie gunner, to an old Irish witch riding a large orb – it’s unlikely that you won’t find a character you like. With purchasable (with in-game currency) mods, skins and emotes, you can make each character your own once you put enough hours in and win enough matches. When searching for a match, you will be placed at random either of the game types. In an objective match, there are three capture points that when active must be claimed and defended by standing on them for points to be earned. In a power cell match, cells must be broken out of containers and held onto until a drop off point becomes active. Although the modes aren’t hugely different, I found capturing objectives much more enjoyable and it would’ve been nice to be able to choose to play only those matches.

As well as the game type being random, the map you play on could also be any number of Bleeding Edge’s variety of stages. Each environment is totally unique, with urban locations, dusty deserts, and futuristic structures all a part of the map cycle. The stages are all packed with environmental hazards that you’ll need to be careful of, and trapping or launching a foe into the path of an oncoming train is just delightful.

Points are earned in each battle for dispatching an enemy player, which very much encourages fighting with others (alongside the time taken to respawn). Teamwork is absolutely key in taking down the enemy heroes. If you find yourself in a situation where you are outnumbered, you might as well put the controller down because you are not winning that fight. If you have competent allies this isn’t an issue, but if you don’t there’s no carrying the team here. The biggest issue with Bleeding Edge is the horrendous lag found in about 50% of matches. Seeing an enemy stutter along becomes such a common sight, and it obviously has huge effect on combat. Timing the perfect parry, or even making contact with a foe is nigh on impossible in these circumstances. Obviously a patch could rectify this issue entirely, and I really hope it does.

Bleeding Edge is a fun and charming multiplayer experience hugely let down by technical issues and a lack of match options. Despite these problems, finding a colourful character that clicks with you, and making a huge play that helps win the match feels incredible. If you can find some friends to play with and look past the lag, you could have hours of fun in this stylish world.

A fun multiplayer brawler hampered by some lag issues and a lack of game types. With an update or two to iron out the kinks, this utterly charming game could go from good to great.