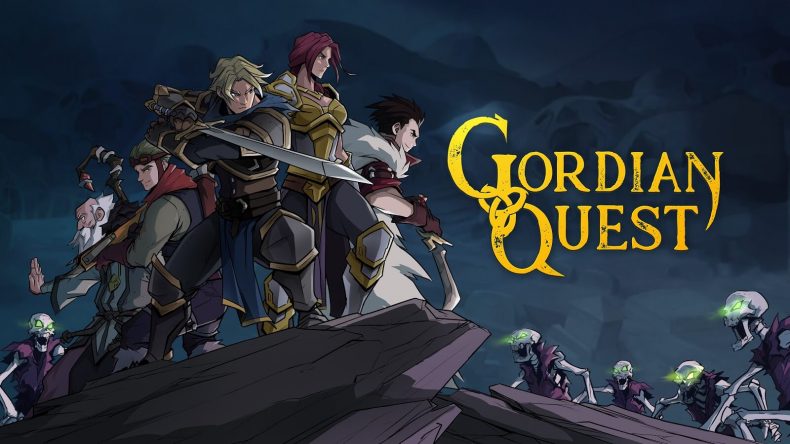 It seems that more and more games are mashing genres together these days. Not that I mind; it proves that there’s still plenty of innovation left in the gaming industry. Developers aren’t settling for “just another FPS” or “just another open-world RPG,” which is definitely a good thing. I’m sure the irony isn’t lost on developer Mixed Realms that its Early Access game, Gordian Quest, is a mash-up of turn-based RPG, card battler and roguelite.

The world is cursed and the undead roam freely. Something is organising them, however, and it’s up to you and your growing band of adventurers, clerics and rangers to help protect the people of Westmire, in the first act of this fantasy tale. Choose your starting character from the six available, though there are more planned for the full release, and you’re thrown right into the action. Using a grid-based system, one for your team and one for the enemy, you are given sets of cards for each round, each using up Action Points (AP). There are offensive cards (the attacking kind, not the verbally abusive kind), defensive cards, passive cards and support cards, which can deploy things like turrets to help you. The latter are usually restricted to characters like Bertram, the ranger of the group. Each card uses a set number of AP and each character has 3AP per round, requiring some strategy as you balance attack and defence, sometimes even having to put a character at risk in order to weaken an enemy enough to land that vital, killing blow.

Gordian Quest does a reasonable job of teaching you the basics of combat, during its opening moments. It explains how to hover your mouse over icons on both enemies and NPCs, to see what moves they are planning once you’re done with your turn. If your NPC friend has a passive card that deals follow-up damage after you attack, it’s good to know as you plan your next move. Same goes for if an adversary is planning to use a particularly nasty ability, it lets you work out if you should move out of range in lieu of simply playing that blocking card. It’s not all about fighting, though it does make up an awful lot of Gordian Quest’s current gameplay. In between battles, you’re often talking to folks at the Garrison, either to heal or rest (which also restores any expended special cards), buy equipment and supplies, or to take on new side-quests in order to raise your level for those tougher story missions. Outside of the Garrison, the map is made up of a set of nodes connected by various paths. Each node contains an event or enemy encounter, with a level attached, which lets you know whether or not it’s worth taking them on or finding a way around.

Events, either on the main map or within dungeons, are very Dungeons & Dragons. You’re shown a hand-drawn image of the current scene, with text describing the situation in which you find yourself. Sometimes it’s as simple as finding skeletal remains and deciding whether to search them or leave them be, but others are more complex, requiring dice rolls to determine the outcome. Do you take the bandits head on, requiring a strength check, or sneak around to surprise them, which requires a Dexterity check? Either way, you aren’t guaranteed to succeed. It isn’t all down to the dice though, as you choose to expend one of your cards in order to add a modifier, which means rolling a number that would normally be too low, is now bumped up to a higher number. The better the card expended, the higher the modifier.

There’s a lot to like in Gordian Quest, from its beautiful visual style to its fun and engaging combat mechanics, but there is no getting around its repetitive nature. You obtain some quests at the Garrison, head out to the Westmire map and click on where you want to go, sometimes passing through nodes that have you making decisions or getting into fights, you fight some more, and then you go collect your reward. That’s the loop.

There’s also some grinding involved, especially when it comes to heading into the finale of the current content. Suddenly, the level required goes through the roof and you’re basically forced to clean up previous encounter nodes before you can progress. This might also include heading into battles that are already a few levels above your own, which can lead to some nasty difficulty spikes. If you’re playing with permadeath on, which is thankfully optional, you might find yourself having a chat with Death a little sooner than you’d have hoped.

Thing is though, there’s something enchanting about Gordian Quest. It’s easy enough to play that almost anyone can jump in and enjoy this fantasy adventure, without getting too bogged down in learning the precise ins and outs of each card, or the strengths and weaknesses of each character. It’s still good to learn the basics of those things, and players wanting more challenge can dig into the minutia of the game’s mechanics and opt for the harder difficulty and permadeath options. In a world filled with games wanting to murder you at every turn, it’s nice to play a fantasy RPG (even a hybrid one) that caters for a wider audience – even if it is just the first act.

Can be repetitive
Some nasty difficulty spikes

Blending together a turn-based RPG with card battles and roguelite mechanics, Gordian Quest has a certain magic to it, despite its repetitive gameplay loop.