The Crew: Calling All Units Review 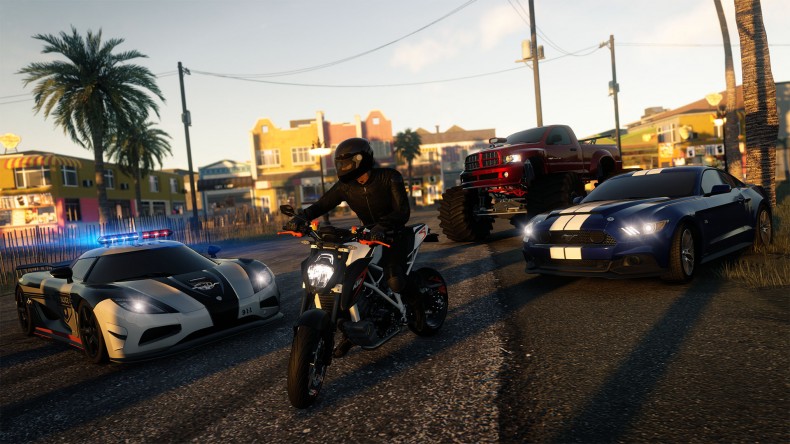 The Crew was a hit-and-miss game right from the start. Driving around a full representation of the US was a great concept, and one that could genuinely be fun, but ultimately its off-road physics were far too unrealistic and its chase AI was a joke. That said, simply going for a drive in the completely open, always-online world is still a fairly relaxing experience, and it’s littered with little challenges to keep you occupied for quite a while.

With Calling All Units, Ivory Tower attempts to add a sense of Need For Speed: Hot Pursuit to this world, including various special abilities to either help escape the police, or help the police capture criminals. It’s a neat idea, despite its obvious unoriginality, and chasing down other players in your police-issue Nissan GT-R can be tremendously fun. Of course, like the main game, there is a story to this DLC. You play as upcoming cop Clara Washington, tasked with taking down a new gang, the Harvesters. Unlike the main game though, this story is as bare bones as you can get, complete with some of the most phoned-in voice acting I’ve ever heard in a game. Now, I’m not entirely convinced that’s all down to the voice work, as the script for Clara’s part is about as one-dimensional as possible. I’m not sure that any voice actress could have done much with the garbage on offer. But the story isn’t really particularly necessary anyway. Beyond setting the scene for why you’re driving at silly speeds around the country, or why you’re a cop chasing down criminals (although that probably doesn’t need an explanation), any kind of narrative barely needs to exist.

Unfortunately, the actual story content is also quite spartan, with only twelve missions on offer that each last under ten minutes, most under five. The only reason it took me over five hours to complete the missions was because at least three or four of those hours were spent grinding out enough money to pay for a Circuit spec police car for the few missions I had remaining. And when almost every one of those missions consisted of “chase down this guy” it wasn’t exactly filled to the brim with variety. Luckily, the best part of Calling All Units has nothing to do with the story content. With The Crew essentially being an MMO, its multiplayer content never really amounted to much before now. You’d drive around while waiting for lobbies to fill up, or you’d rely on randoms to help in co-op if you were willing, again, to wait for someone to join. The best PvP moments happened naturally within the world, such as randomly meeting a stranger at the Laguna Seca circuit and deciding to race for a few laps, and that kind of thing is what this new DLC tries to capture. Aside from the new missions, a series of crates are dropped around the map, ranging from bronze to platinum, and contain parts for cars or big monetary prizes that increase in value and difficulty depending on the colour of the crate. Driving over these crates in a standard vehicle will trigger a police chase, even inviting nearby players to join in as you race to deliver the crate to a specified location, usually several miles away.

This kind of instant-action PvP event is perfect for a game like The Crew, and if nobody else joins in, you’re still left with a reasonably decent chase experience as you attempt to evade AI cops to deliver your crate. You even have gadgets to aid in your escape, such as EMP hacks that disable pursuing vehicles for a few seconds, or if you’re playing as Clara chasing down other players, you can use abilities that interfere with the steering of your prey or simply limit their ability to accelerate. It’s somewhere between Hot Pursuit and Watch Dogs 2’s car hacking, and it can be quite intense. These chases can happen at any point in free drive mode too, as you are constantly offered invites to join new events, and it will even let you know how many players are currently on each side. Electing to join in will result in a brief load before you’re catapulted into the action, either aiding the player carrying the crate or attempting to stop them, depending on whether you’re in a street car or police vehicle at the time of accepting the invite. With nearly 20 new police-spec vehicles, ranging from a Nissan GT-R, Lamborghini Gallardo and even a Hummer, all the way to an Abarth monster truck (weird, I know) and several bikes from Kawasaki and Ducati, there’s a decent amount of choice on offer. They may not always be the best at first, and some are ludicrously expensive considering the lousy rewards offered in-game, but the new Smart Loot system will help you gain the parts you need to be competitive through completing any events within the game world. This new system effectively speeds up the levelling process for all players, helping them to reach the higher levels needed to take part in each of the DLC’s new missions. It also affects the main game too, keeping the pace going smoothly as you progress through the story, and allowing you to reach higher levels more quickly, all the way to the new cap of 60.

Calling All Units isn’t a perfect expansion by any means, far from it actually, but it does offer a more connected experience in an MMO that really didn’t actively encourage much multiplayer before now. Driving along in a police car, only to suddenly be thrown into a chase because you were within range of a nearby stolen crate, is quite a shock to the system and can be genuinely quite fun if you’re in the right vehicle at the time. It won’t entice any newcomers to try out The Crew, nor will it tempt back any players who were unhappy with the game in the first place, but for plenty of existing players it adds a fresh layer of gameplay.

Calling All Units is a fairly basic expansion to The Crew, offering very little in the way of content. But its new PvP chases help turn it into the MMO it was originally meant to be.

The Crew 2 closed beta begins on May 31

The Crew 2 driving to a June 29 release date