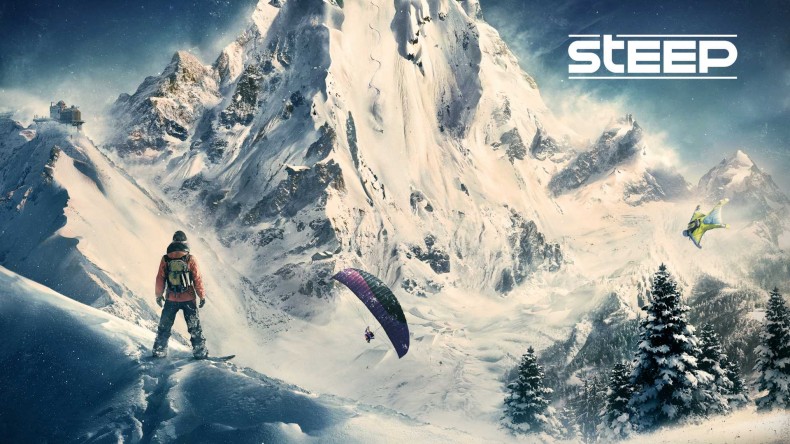 We all have those games, don’t we? Those ones you turn to when you want to completely switch off and rinse away all the grimy stress of life? Those easy to play, minimum concentration games. The ones you don’t really pay full attention to, because you may be listening to a podcast or watching a TV show at the same time. We all have ‘em. Steep’s a pretty good one of those, a nice chilled snow sports game (you’re fired – Ed) in which you can sit back, relax, and cruise down some stunning, snowy vistas. The only issue is that all of Steep’s wrapping is either infuriating, confusing or utterly pointless, which doesn’t half ruin the “chilled” vibe from time to time.

Before delving into Steep’s many frustrating aspects, I do want to make clear that there is fun to be had here. The physics and movement of snowboarding, skiing and even falling through the air in a wingsuit feel pretty good. When you get to full speed, hurtling down a snowy incline, there is a real sense of momentum and velocity which is heart pumping. The wind blows intensely in your face and you almost get tunnel vision, trying to elegantly avoid all obstacles that lie in wait. Whether you’re going for death runs off the top of the highest peak or just going for a pleasant stroll to gaze at the simply stunning Alps as the blood orange sun sets, the actual traversal in Steep is quite enjoyable. Well, aside from the parasailing, which is mercilessly dull with its difficult controls and rudderless movement. This is alleviated somewhat by there being a lot of stuff to do in Steep: there are several different types of challenges, races and “Mountain Stories” (a set of tasks to involving a specific peak) which can keep you entertained if you’re not one for the scenic, relaxed rides. There are a mixed bunch of good, bad and rage-inducing courses, and they can range from 30-second sprints to 7-minute cross country marathons, but when you find one that has all the right peaks and slopes to really get the adrenaline flowing it’s good fun. Being able to instantly restart challenges really helps this, too. It may only seem like a small factor, but being able to instantly try again after falling arse over tit, be it my own fault or not, meant I was far more inclined to continue trying rather than permanently throwing the controller away in a paddy.

My favourites are the “freestyle” challenges in which you’re tasked to earn as many points as possible by doing tricks and flicks while in the air. I did have a few issues with the trick system itself, as the jump button wasn’t particularly consistent or responsive for me, but when I did manage to pull off a triple flip while falling at 50mph it didn’t half feel sweet.

So yeah, Steep is pretty fun, or would be if it wasn’t for the plethora of bewildering and flat out nonsensical design decisions that continued to rip me out of the enjoyment of just snowboarding down a proper big hill. The most egregious of these, for me, the one that made me scream “Oh, just fuck off!” the most is without a doubt the checkpoint system on races. While hurtling down often hazardous courses in races, you have to pass through each and every checkpoint or you’ll fail. Now, in a game that promotes exploring and finding your own routes, this seems really counter-intuitive. Having the points as guides would be fine, but punishing me for missing them, especially when I miss them by literally millimeters, is just frustrating and is one of the many things that ruins the immersion. As I alluded to, Steep is a game not only about extreme sports, but also of discovery, surveying the vast Alpine landscape in search of new sick spots, bro. This is achieved by giving your thrillseeker a pair of binoculars, with which they’ll spot distant flashing base camps which you can then use to start off from. This, is a completely pointless endeavour. Once a new base camp is spotted you then have to get within 1,000 meters of it before you’re able to warp to it. Which just makes no sense because if you’re trying to get closer to a point it means you’re generally traveling in a downwards direction and once you’ve stopped you no longer have the leverage to be able to spot the base camp. Which means you’ve either just wasted time on a fruitless journey or you have to walk painfully slowly up to some higher ground. And I mean PAINFULLY. Steep has been forced into an open world when it really doesn’t need it; a good old fashioned menu would have done just fine.

Speaking of which, the menu from which you select challenges or which peaks you want to start from is a needlessly complex “Mountain View” map, which is fiddly to navigate and difficult to keep track of where you’ve actually been and what you still need to do. It feels like, in a bid to seem fresh and inventive, or to just be distinguishable, the developers have tried to change things up. When in reality what they’ve done is over complicate and confuse, and actually distracted me away from the whole point of playing. I don’t want to explore an unimaginative yet pretty mountain range or get lost in a menu – I just want to snowboard. Another grievance is that a lot of the tracks are ruined, needlessly, by the positioning of obscenely difficult to avoid obstacles. Trees, rocks and dangerous cliffs often jut out at the most unsuspecting of positions which on far too many occasions completely ruined my momentum and enjoyment. I understand the need for challenge, don’t mistake me, but there’s a more subtle and refined way to it than to just throw loads of annoying fences everywhere. Often right in the middle of those fucking checkpoints. It feels as if someone dropped the shaker and now the chips are drowning salt.

There’s still more, too, you know? Some trees your character will simply go through as if they’re not there and others will cripple them. Pausing the game during a challenge will completely restart the challenge which, halfway through a seven minute race, is not fun and you have to always be online to play, which offers nothing to the game and just screws those of us unlucky enough to be with Virgin.

There is some fun to be had in Steep. The crux of the game, the actual snowboarding and skiing, do feel good and are fun to play and there are a whole lot of varied challenges to do in the frosty Alps. But a whole bucket load of bizarre design decisions distract from that. Ubisoft tried to innovate, but instead just over-complicated.

Snowboarding, skiing and wingsuiting is fun
Lots to do
Instant restarts

Whether you want to go on a relaxed stroll or rattle down a death trap of a mountain, the fundamental extreme sports aspect of Steep is fun. However, a flood of bewildering, infuriating and simply pointless design decisions distract from that.

Steep: Road to the Olympics Review

Steep version 1.04 will be released with World Tour Tournament next month