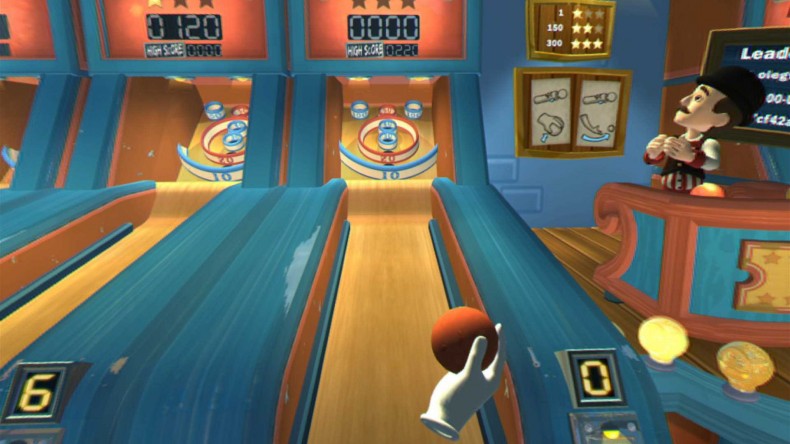 Hey guys. Do you remember Carnival Games? It’s that compilation of banal fairground minigames released way back in 2007 for the Wii to pretty abysmal reviews. Well, it’s back and this time it’s in VR! Welcome back to Carnival Games, re-released with a modest lick of paint for PSVR so that you can actually feel as though you’re walking around inside a game that bored you out of your mind ten years ago. The joy of nostalgia!

The first thing that strikes me as odd about Carnival Games on PSVR is that Sony’s machine suggests children under the age of 12 shouldn’t use their VR unit, which begs the question: who on Earth is this game aimed at? Is it aimed at me? Is it aimed at adults? If I wanted to throw a ball at some bottles I could probably do it for less than the £400+ it’s gonna cost me to get in on this action. Anyway, let’s talk about what’s on offer here for anyone who hasn’t played it before or is genuinely interested to know. Carnival Games consists of four themed areas comprised of three different games each. You’ve got throwing balls at bottles, hoop toss, Skee-ball, some shooting galleries, a climbing wall and even a haunted house. To be fair there’s probably enough variety here if only the games on offer weren’t the kind of thing that, in reality, you only enjoy for two minutes while off your face on sugar from the massive candy floss you bought in a desperate effort to impress a date. These minigames just aren’t interesting to play; they’re the opposite of interesting, whatever that is.

However, each to their own. Perhaps you really, really love hoop toss and you’ve bought a PSVR especially to play it, well, bad news for you too because the motion tracking is generally pretty iffy here so you don’t even get to experience very accurate mediocrity. Games are played via two floating hands on-screen, controlled by two inexpensive PlayStation Move controllers. It should be a simple and intuitive set-up that anyone can get their head around but it fails because the tracking feels off, even a game as simple as chucking a ball at some targets requires that you adapt a wholly unnatural throwing technique to achieve any degree of success. I genuinely couldn’t get my ball to go in a straight line for the first ten minutes I was playing.

The control problems extend to other annoyances like trying to move around the gaudy central plaza or even just attempting to leave a game. I found myself having to twist around in my seat and flail hopelessly in the general direction of the exit sign which, because this is VR, is awkwardly placed off to one side and behind the player.

Are you still interested? OK. The aim of Carnival Games is to play minigames and collect tickets so that you can unlock more themed areas and games as well as very low quality toys which you can, if you have some sort of weird low resolution object fetish, view in a playroom. It takes about an hour or so to unlock every minigame on offer, although, to be fair, it did feel far longer than that. Carnival Games wasn’t a good game on Wii, it’s simple, boring and it looks its age. It also doesn’t belong on or benefit in any way from being brought over to VR, it adds nothing to the game. I felt less immersed here than I did playing it on the Wii, where at least the controls worked properly.

A collection of minigames is something that could work really well on PSVR; with some decent graphics and a strong collection of games designed from the ground up to utilise the immersive qualities of PSVR you could be looking at an essential purchase on the platform. Carnival games falls so short of achieving any of this that it’s genuinely hard to think of a reason for anyone to buy it.

Aids in developing a new and totally unnatural ball throwing style
You can laugh at the graphics
Made me remember the Wii, I loved the Wii

Carnival games falls so short of achieving anything good that it’s genuinely hard to think of a reason for anyone to buy it.