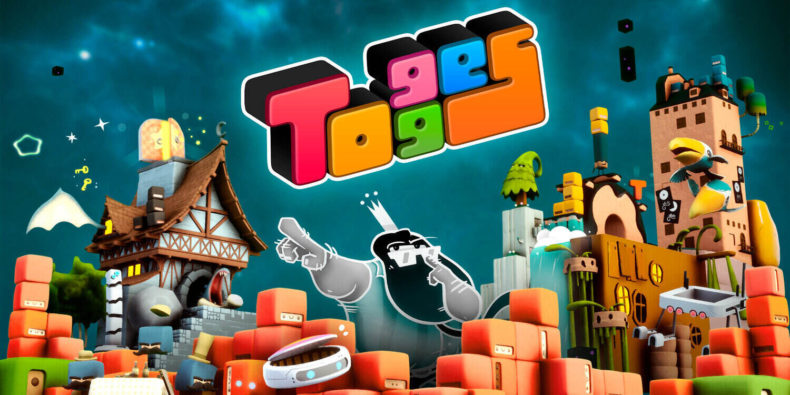 There have been some pretty weird protagonists throughout the history of video games. From paper thin rapping dogs to slices of bread, there are plenty of video game heroes that aren’t bland muscular white men if you look hard enough. Togges continues this glorious tradition of wonderfully unusual protagonists but having you play as a Roomba.

You aren’t just any Roomba though, you’re a magical space Roomba tasked with gathering fruit from lots of different planets in order to stop the universe from being obliterated. As well as collecting this strangely important produce, you’ll also need to convince the leader of each planet (be it a sleepy dragon or lion DJ) to join the king you’re working for in beating the apocalypse. The story is as goofy as it sounds, but at least gives you a reason to go and gather collectables.

Despite all collectables and jumping, it might be a bit of a stretch to call Togges a 3D -platformer. The focus of each sprawling level of the game isn’t to jump your way past obstacles to find that delightful shiny shit, it’s to make a line of the titular cubes to those collectables. By holding the right trigger you begin laying a path of Togges in any direction you zoom, and you’ll need to navigate the environment so these block based allies can get where they need to go. 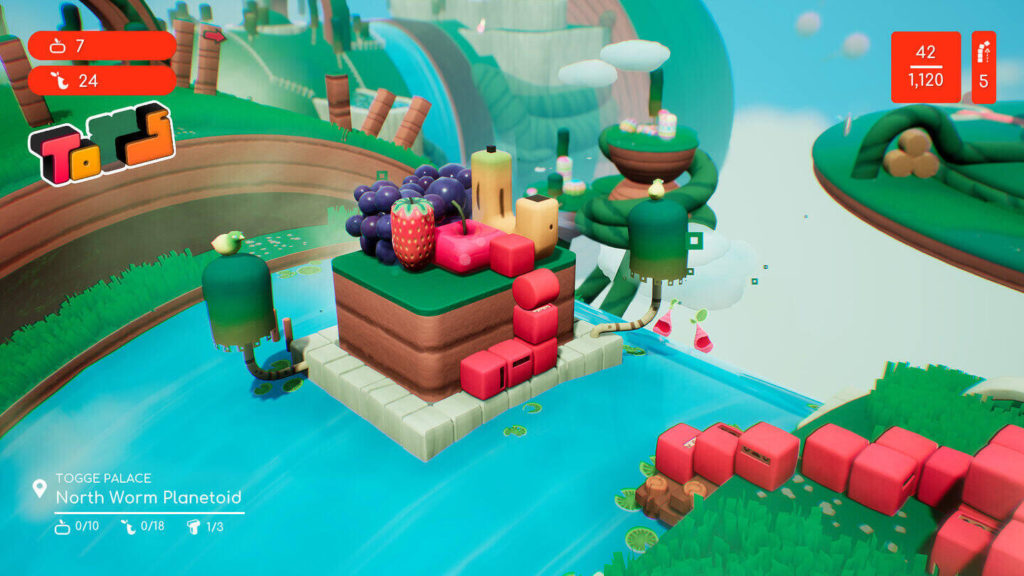 Your starting Togges can only be stacked five blocks high and can only be placed one block apart, so getting them around obstacles can be difficult. Alongside this you start each level with one thousand of the little cubes, which sounds like a lot but by the time you get from one end of the map to the other you won’t have much wiggle room to explore. Deleting old Togges is key, and fortunately pretty easy as long as you don’t mind a bit of vacuuming.

More than anything, the main thing you need to focus on in Togges is exploring every corner of every world. There are collectables hidden everywhere, from the extremely important fruit to shards that raise your max Togge count by five and letters that spell the word Togges. Sometimes you’ll find this helpful collectables just lying around but more often that not they’ll require you to do something with your cubes. Sometimes you’ll have to arrange them into a shape, sometimes you’ll need to stack them on top of crates or cracked tiles to break them. It isn’t always that obvious either, even things like blowing dandelion puffs or scaring crows can yield lovely shiny bits. It really encourages playful interactions with the environment and makes investigating even tiny elements of the environment potentially rewarding.

This is even more true when you start unlocking different Togges. Each colour of cube has a different effect, which will help you get around and solve mini puzzles. Yellow Togges can conduct electricity and stack two cubes higher, but count as two Togges each. Green Togges are huge and enable you to get even higher, but are a bit of a pain to use because of their size. Blue are perhaps the most useful because they stop water from being an issue whatsoever, although to compensate they can’t stack very high at all. It’s fun to experiment to see what the best cube is for each situation, and every time you unlock a new one the game flips on its head. 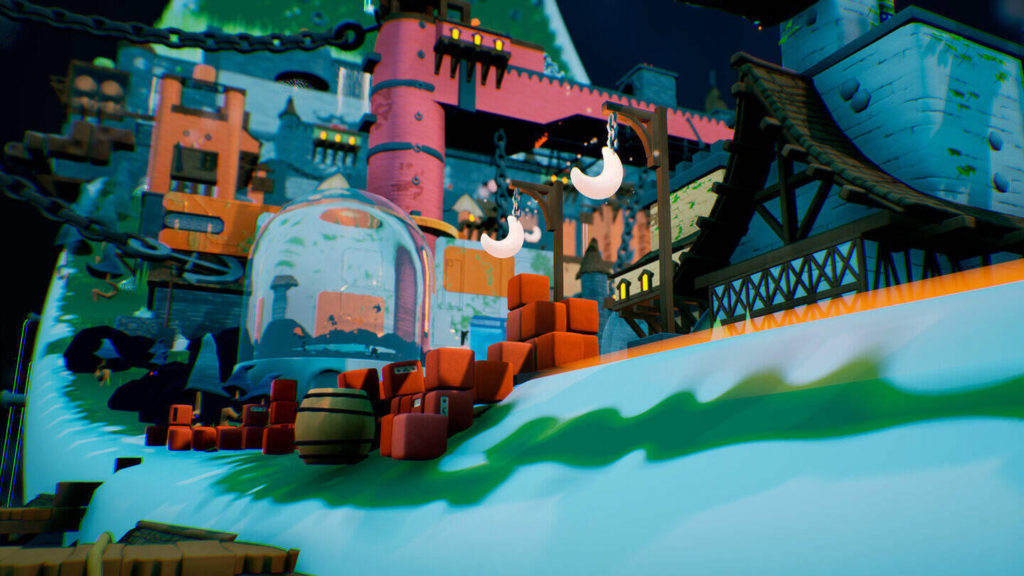 As well as different cube types, you’ll also find handy items you can use on your adventure. The rollable bomb is useful for all your destructive urges, whereas the shuriken can cut throw branches and be used as a temporary platform for when you’re climbing vertically. The item I used the most though was the radar, which as you might expect point you towards collectables. With so many things to find this little gadget is a godsend, and will help you figure out the general area you need to investigate and interact with the environment.

The variety of worlds you’ll find yourself cubing about in is pretty impressive, with stages that see you climbing medieval castles and lush forests searching for goodies. The early worlds are a whole lot of fun and despite being pretty vast they never feel overwhelming. That can’t be said for the later stages of the game though, that were so big I didn’t even know where to begin. It’s a bit of a shame, and makes the prospect of collecting everything seem pretty unreasonable.

Above all else though, the main issue I have with Togges is the narrative. For a 3d platforming collectathon they sure do like to throw a lot of dialogue at you, and it’s always a chores to get through. The writing has a sort of Katamari vibe to it, but it just doesn’t stick the landing and every interaction feels like it’s trying to be quirky and ends up landing closer to annoying.

Togges is a truly unique game that puts exploration above all else. Navigating your trail of cubes throughout the colourful stages is a lot of fun, and solving problems with the boxy tools at your disposal is always satisfying. If you can cope with the overly large stages and a few annoying characters, you’ll be in for a planet hopping treat.

Togges is a weird and wonderful 3d platformer that puts the focus on exploration, but sometimes the size of new worlds is just overwhelming.