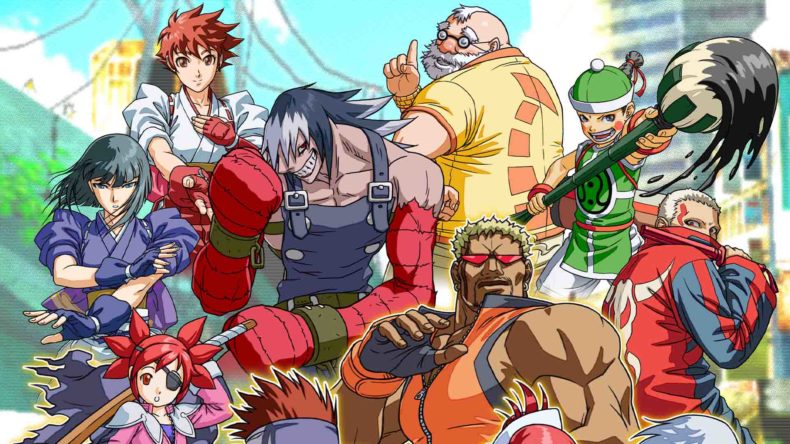 Back in the early to mid-2000s, the 2D fighting game scene was in a strange place. Arcades in the UK mainstream had begun their descent into the barren state they find themselves in now. Apart from Fighting Jam, Capcom were dormant. SNK Playmore were still a thing, even releasing KOF games at a budget price point in PAL land. But unless you were willing to import or indeed travel to Japan, you may have missed several absolutely brilliant efforts that dropped during this period. The fabled Atomiswave hardware was home to perhaps the best of these – the batshit crazy Hokuto No Ken tie-in, the slept-on King of Fighters: Neowave, and the Rumble Fish series – the latter of which have never legally made it into the home console market – until now. What you can now hold in your hands – or play on the telly if you wish – is a fine port of the 2005 arcade classic, The Rumble Fish 2.

Produced by Dimps, who went on to play a huge role in creating a fighting game renaissance with the era-defining Street Fighter IV, The Rumble Fish 2 is a cracking little fighter with an interesting and varied line-up of characters, great battle system and sumptuous 2D artwork and animation. It adds a bunch of new characters from its predecessor and improves upon it in just about every way.

As with any fighting game worth its salt, there is a suitably bonkers plot underpinning the reason for your characters beating each other up. I won’t spoil too much here, other than to say that you need to be made of stone not to break out a chortle at the name of the fighting tournament that serves as the raison d’etre for your chosen combatant. 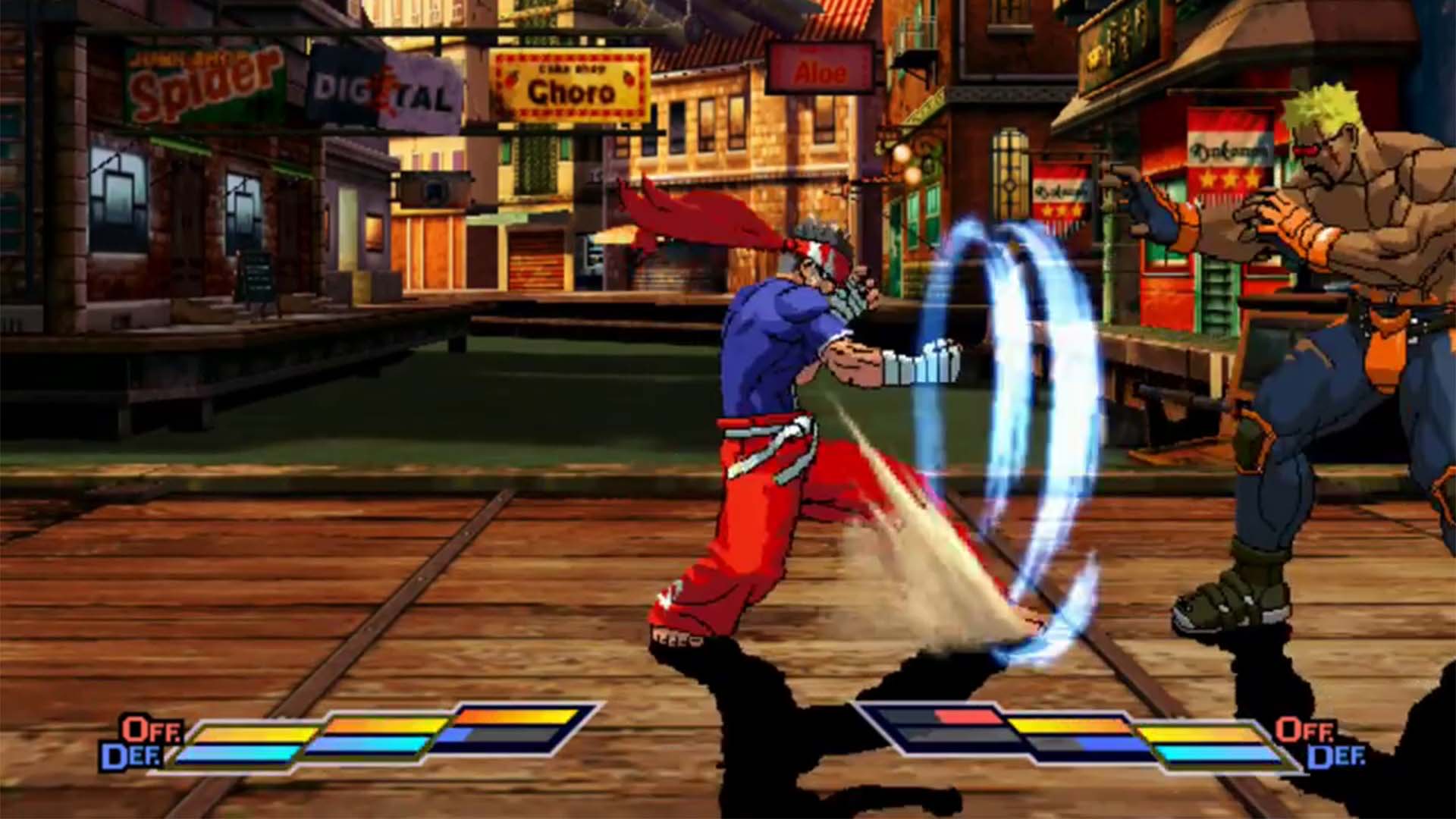 This is a seriously fun game, with a real sense of heft and oomph to attacks, and a slower, more methodical combat than some other turbo charged fare. It has a great chain combo system, and thanks to a simplified four button control scheme (plus block), it is relatively easy to pick up and play. There are plenty of gauges to keep your peepers on. The HUD consists of a health bar, and a Guard gauge which shows how many more hits can be blocked before your guard is crushed. The size of this bar varies depending on character, which is a nice touch. In addition to this, two of the characters have their own very special unique gauges. This blew me away at the time and was the first time I can recall such bespoke mechanics for specific characters. Lud can build up stocks that allow him to perform super powered versions of his specials, whereas Boyd’s cool-monikered Scorpion bar is filled by nailing certain signature moves and when maxed out allows him to deliver crushingly powerful Offensive Arts.

Offensive Arts and Defensive Arts have their own three-segment bars that allow you to hit a plethora of super moves and defensive counterattacks, some of which can knock your opponent across the screen. If you are able to max out both the OFF and DEF bars, which is a pretty rare occurrence, you can pull out a Critical Art, an all-powerful, usually absolutely ridiculous attack which is about the coolest way to finish off an opponent. Below the Guard bar is the Boost Dive indicator. Once this is full you can enter a semi-invulnerable state and access boosted moves. 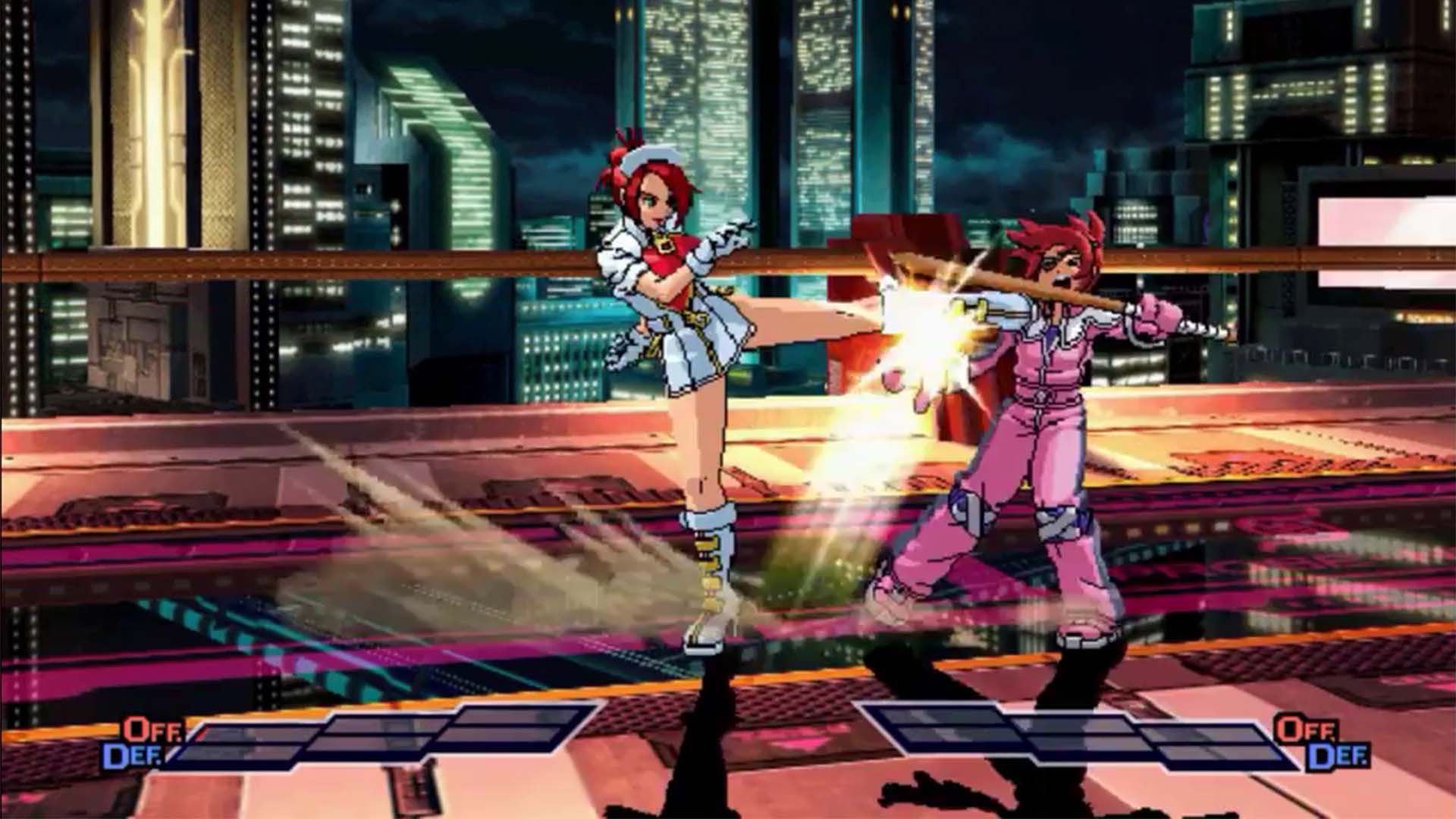 One of my favourite things about the Rumble Fish 2 is when you batter your counterpart so severely you achieve the eye-wateringly-named Parts Crush. This means that you actually affect damage onto your opponent, or sustain it yourself with the shoe on the other foot – which visibly stays with you throughout that bout and even into the cutscenes and stills. A bit like the victory scenes where you banter off your opponent in Street Fighter II – but better. It’s a really cool touch and as the game already looks stunning, you will find yourself trying to pick out the tears, the bruises and scratches. Well, I did anyway, but then I am obviously a bit strange.

This runs great on the Switch, and has become, along with the similarly excellent Under Night: In Birth, one of my go-to fighters for the system – mainly as it still looks smart on the handheld screen, and offers a classic arcade experience for me on the go. As with any 2D fighter, however, you will want to use a stick to get the best out of it. As a package, it is pretty bare bones with the usual training, arcade and story modes.

Those picking up the physical release on certain deals get the original Rumble Fish thrown in, which is a must for fighting completists as it can be prohibitively expensive (£75) on NTSC-J PS2. What this does have, is the promise of online play with rollback netcode – which should make this perfect for going online and getting absolutely smoked by a Japanese kid who has probably forgotten more than you will ever know. Superb.

Looks great
Plays like a dream
Unique mechanics and character

The Rumble Fish 2 has the promise of online play with rollback netcode – which should make this perfect for going online and getting absolutely smoked by a Japanese kid who has probably forgotten more than you will ever know. Superb.