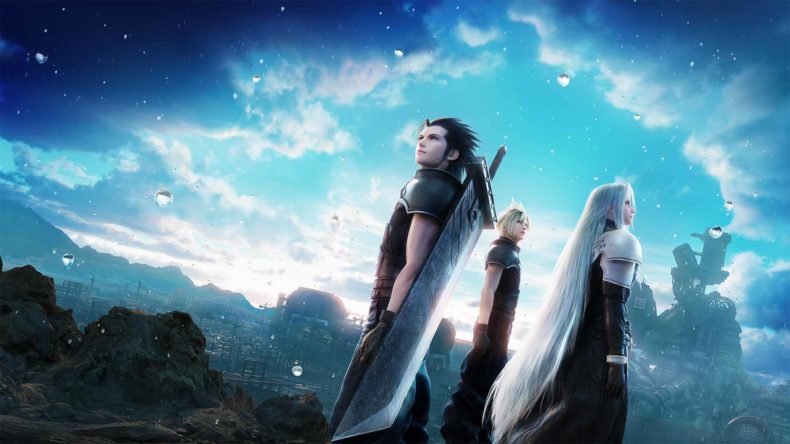 It’s easy to scoff at spinoff games as just cashing in on something, but there have been some fantastic games and franchises born from the humble spinoff. From Mario Kart to Hyrule Warriors, taking something familiar and shaking it up can be a recipe for something wonderful. Well over a decade ago we got another exciting spinoff on the PSP, and now it’s back for everyone to enjoy in modern polished glory. If you couldn’t get enough of Cloud and the gang after Remake then prequel Crisis Core -Final Fantasy VII- Reunion might be just the cure for those Midgar blues.

Don’t expect to see too much of Cloud though, because this time around the protagonist is Zack Fair. This black haired doppelganger has more than a little in common with Cloud: his looks, his sword fighting prowess, and even his role in SOLDIER. Crisis Core focuses on Zack’s life making his way up the ranks in this slightly shady fighting force, and his relationships with mentors Angeal, Genesis, and fan favourite Sephiroth.

Crisis Core is packed full of new and returning characters from Final Fantasy VII, and since its set significantly before the event of that game you’ll get to learn all about the backstory of plenty of crucial characters. Even newcomers like your main man Angeal provide some background for series veterans, with the iconic Buster Sword strapped to his back. 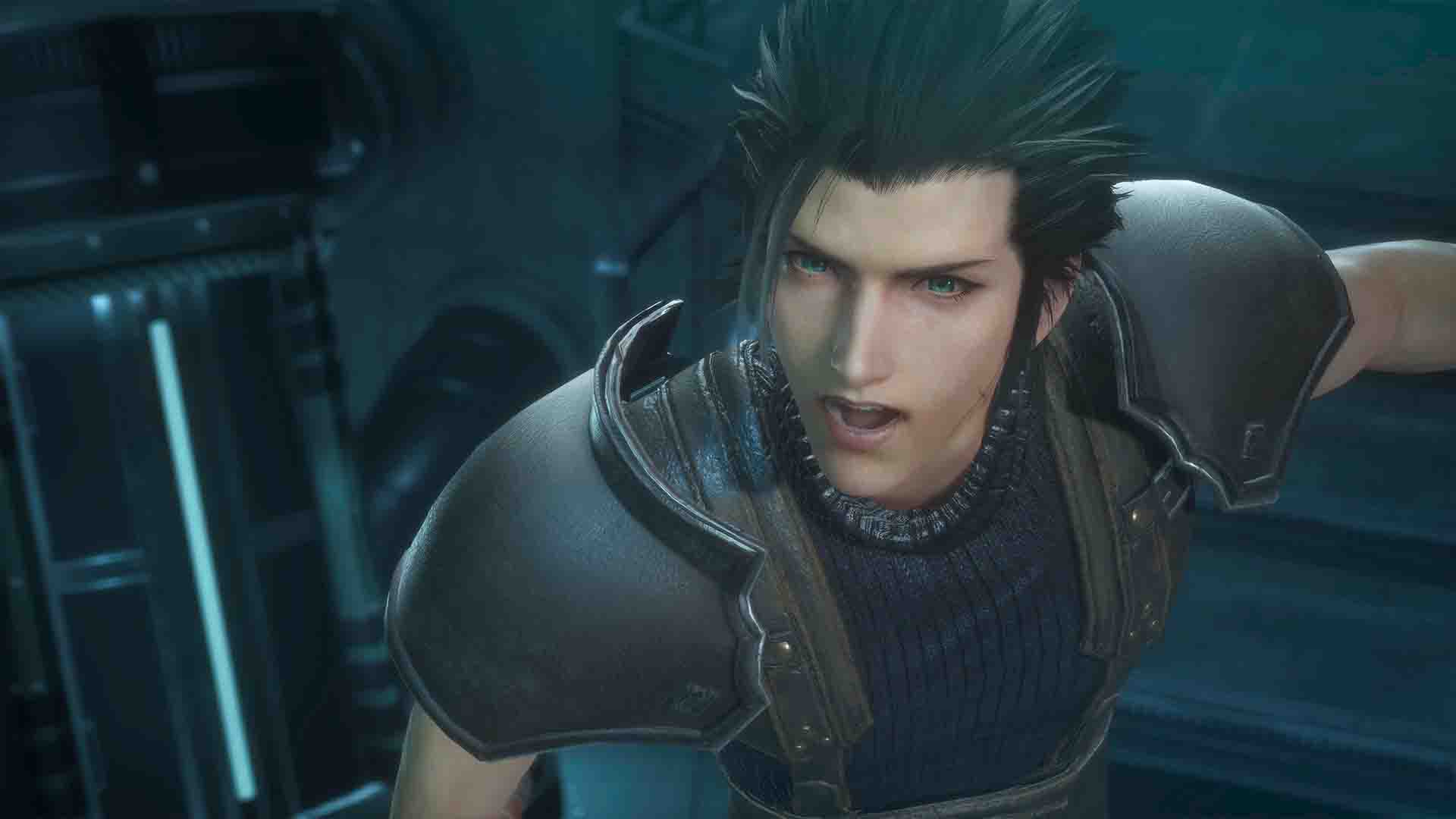 Experiencing all these familiar faces from the perspective of Zack is really interesting, because in terms of personality our hero is nothing like his moody blonde counterpart. Zack is a ball of positive energy with goofy charm who doesn’t think before he acts, and is honestly a breath of fresh air compared to some of the perpetually miserable protagonists of Final Fantasy’s past. He won’t be to everyone’s taste, but this sword-swinging-himbo kept me smiling from start to finish.

Zack’s adventure will see you taking down monsters and military personnel aplenty, and thankfully the combat is a lot of fun. The fast paced action gameplay is fairly simple, with only a basic one button combo, a dodge roll and a block to worry about from Zack’s basic kit. Of course there’s plenty of Materia based magic and specials to equip yourself with too, especially if you want to take advantage of enemy weaknesses to deal extra damage.

What really makes the combat special though is the DMW (or Digital Mind Wave if you want to be fancy). This slot machine constantly spins in the top corner of the screen and is connected to Zack’s emotions and the people he’s formed relationships with. As you beat up some bad guys, it will repeatedly stop with the chance to line up some reels that give you some powerful effects to use in battle. 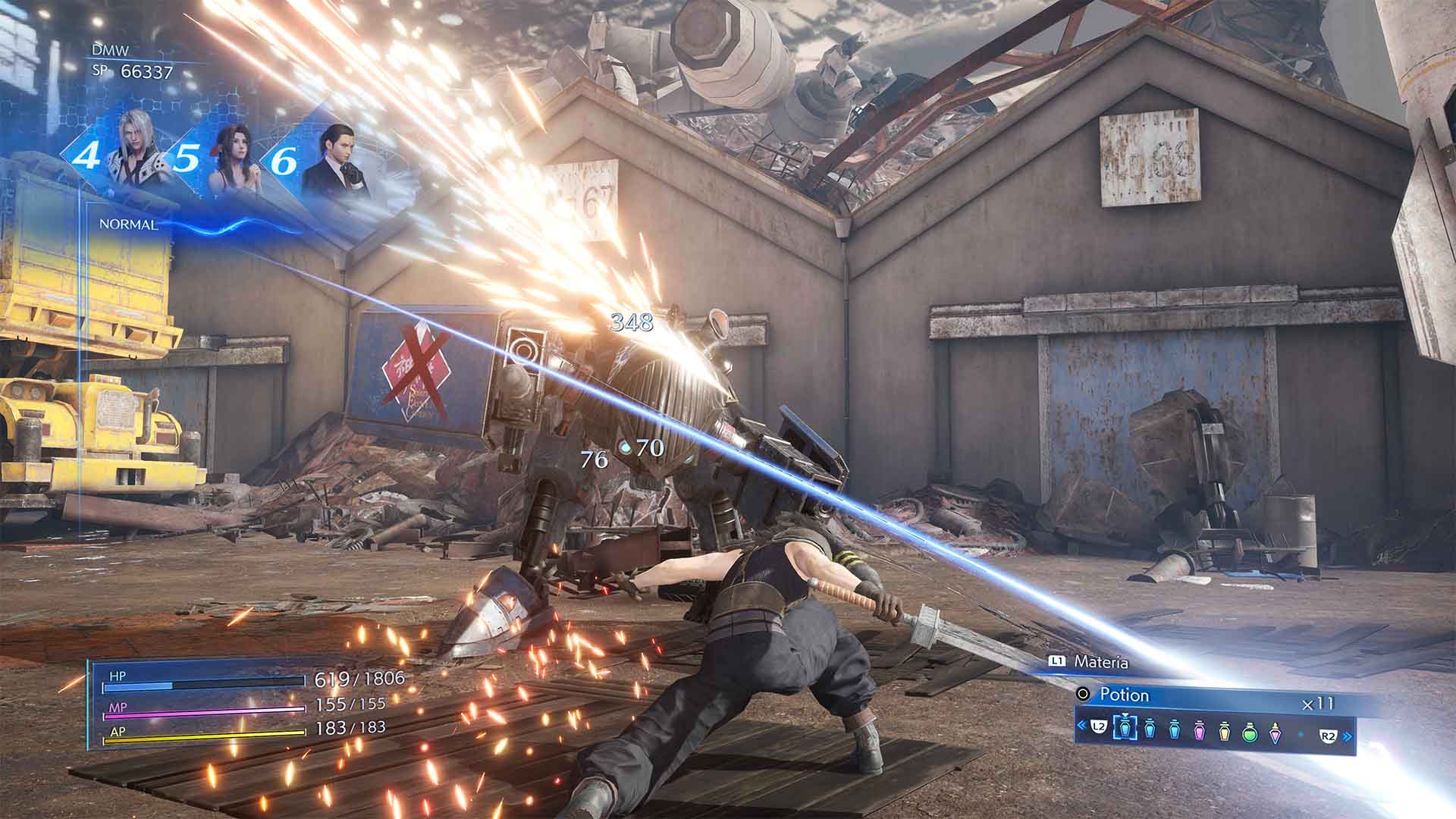 The most notable of these are limit breaks, which happen when the DMW reels all show the same character on them. When this happens you can unleash a snazzy ability that will turn the tide of any battle, whether it’s the power of Sephiroth’s Onnislash or Aerith’s healing. As you progress through the game new faces will constantly be added to the DMW, bringing with them plenty of new battle possibilities.

As well as characters, the reels also feature numbers which are just as important. Getting different combinations of sevens will grant you handy buffs from temporary unlimited MP to taking no damage from physical attacks. It’s even better to get any two numbers in a row on the DMW, because when you do the Materia you have equipped in that slot will level up and become more powerful. No result is better than a triple seven though, which will actively level Zack up. There are so many helpful results that this slot machine can churn out, and the random nature keeps combat exciting without ever feeling like Crisis Core is a game that requires all luck and no skill.

If you want to power up Zack without relying on the luck of the slots, you can always fuse him some new Materia to use in battle. A couple of chapters into the game you unlock Materia fusion, and by combining your best abilities you’ll really give yourself an edge in battle. Once I’d swapped out Cure for Curaga and Fire for Dark Firaga I felt almost unstoppable, although admittedly that happened so quickly that my later game fusions were a little lacklustre. 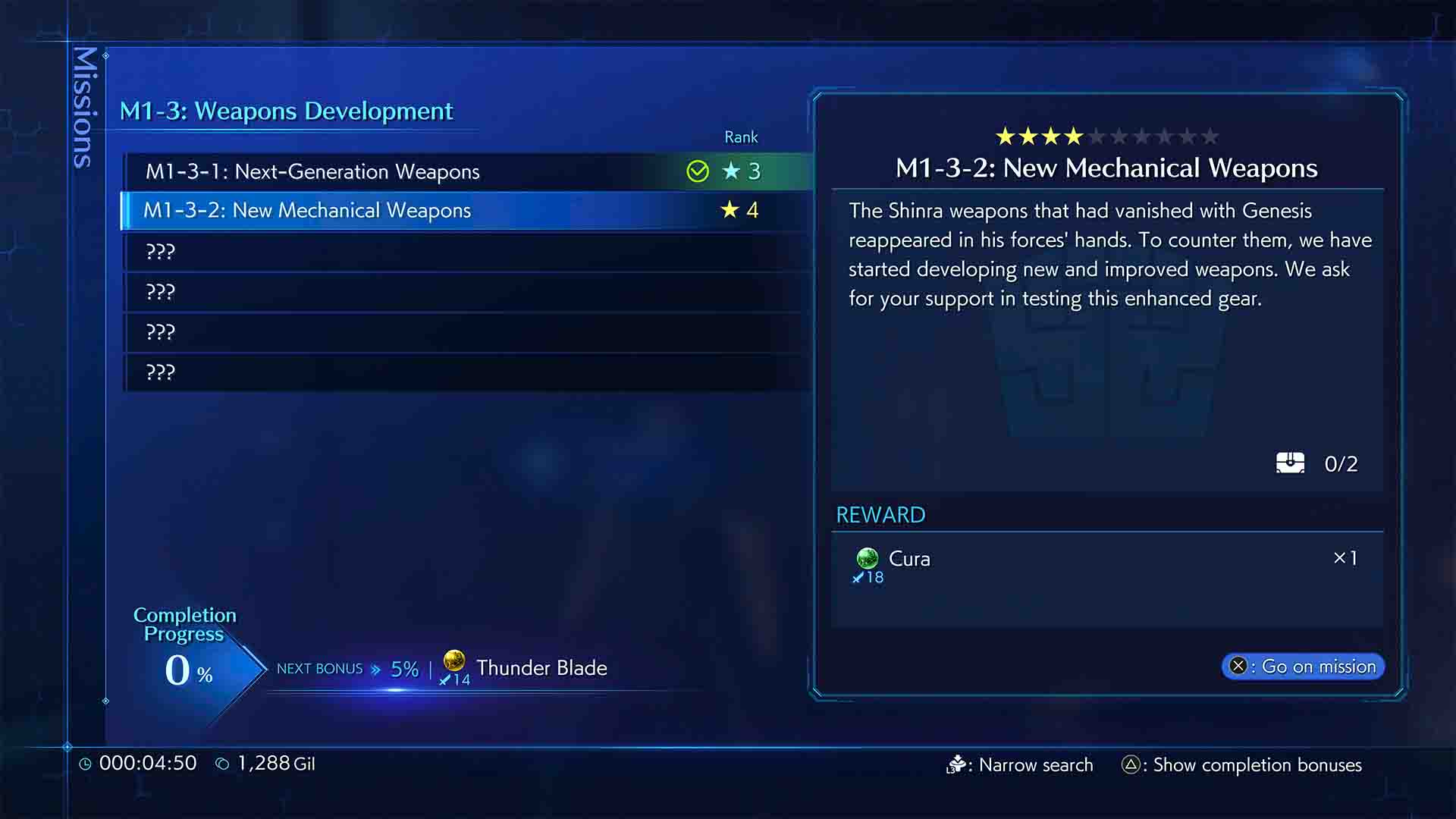 It’s in the latter half of Crisis Core that the cracks really begin to show, and much of that is because of the way missions are structured. You see because it was originally a PSP game, most of your time playing Crisis Core -Final Fantasy VII- Reunion will be spent playing tiny side missions that take all of five minutes to beat. After winning a few encounters you’ll be rewarded with a Materia or new accessory and thrown back into the mission menu to start the loop all over again. Especially back in 2007 breaking up portable games into bite size chunks was pretty common, but when you’re settling down for a couple of hours with a 30+ hour JRPG it feels weird to be sent back to the same maps to beat up grunts over and over again.

You can always switch to the main story if the side quests get you down, but that comes with its own problems. Further into the game the story starts to suffer as every cutscene you’re presented with is packed full of overly dramatic dialogue, with one very major character talking only in quotes from a famous play in the Final Fantasy 7 universe. Hardcore FF7 nuts will still definitely get a real kick out of all the extra lore packed into Crisis Core, but hearing a burly man scream out “What do angels dream of?” in a tense standoff just made me roll my eyes. 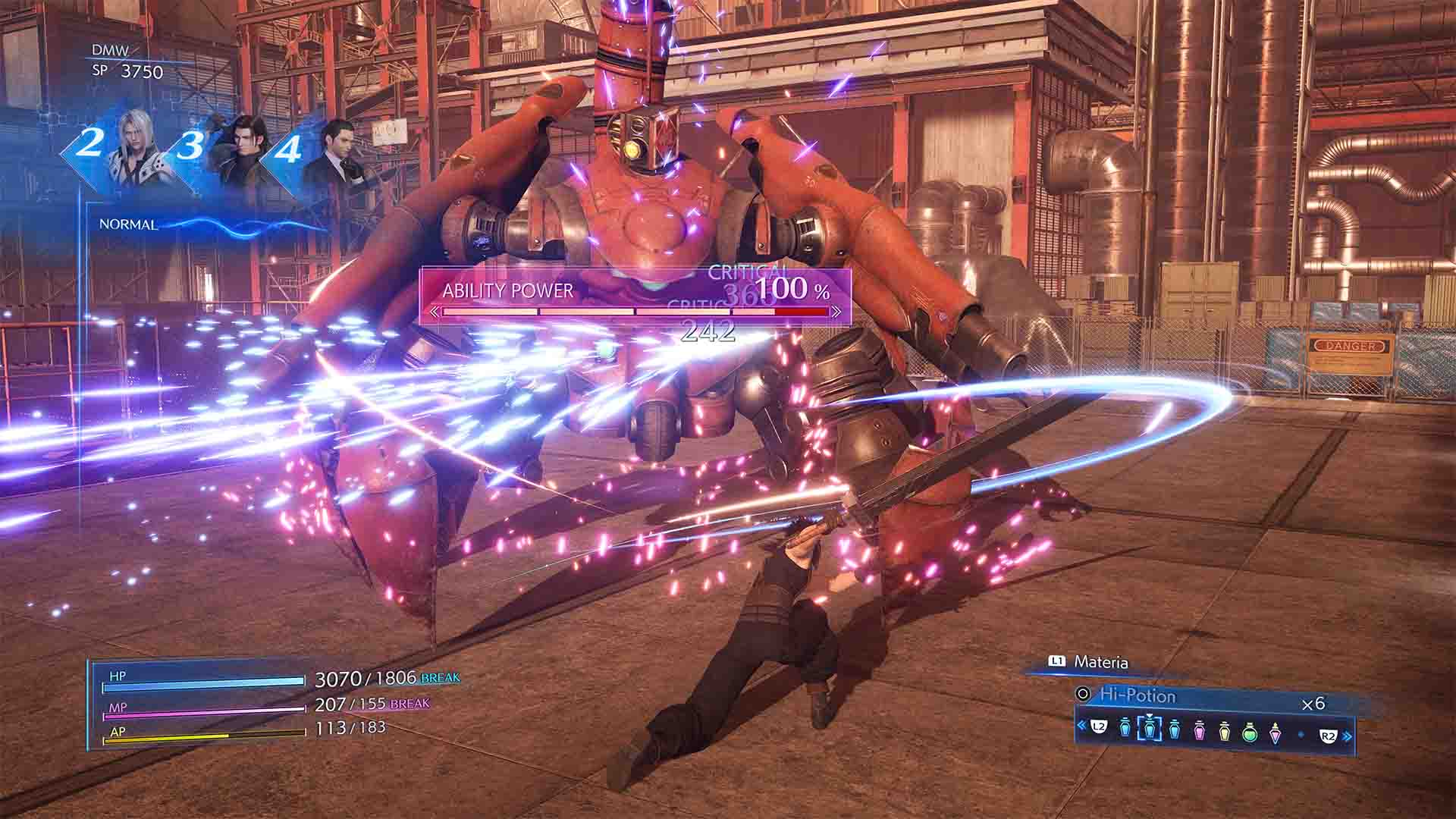 I should also mention If you played Crisis Core on the PSP the first time around, that this remaster is a huge improvement. Firstly a lot of the voice acting has been rerecorded so the actors are the same as the ones used for the characters in Remake, meaning this game feels like it’s in the same universe. The visuals have had a big old upgrade as well. Crisis Core now looks like a perfectly acceptable modern game, and when watching particular cutscenes and summon animations it isn’t too far off from the beauty of Final Fantasy VII Remake. There are some NPCs that didn’t get the full remaster polish, but otherwise it’s rather impressive.

It’s great that Crisis Core -Final Fantasy VII- Reunion is now available for those who missed it the first time around, but it isn’t without its issues. The mission structure means the game just feels far too repetitive, and the story loses its luster as the game goes on. If you’re a fan of Final Fantasy VII and like your combat fast paced then there’s a lot to like here, but don’t go in expecting anything closer to the remake that stole our hearts in 2020.

Crisis Core -Final Fantasy VII- Reunion is an entertaining spinoff with action packed combat, but at this point it's showing its age a little.