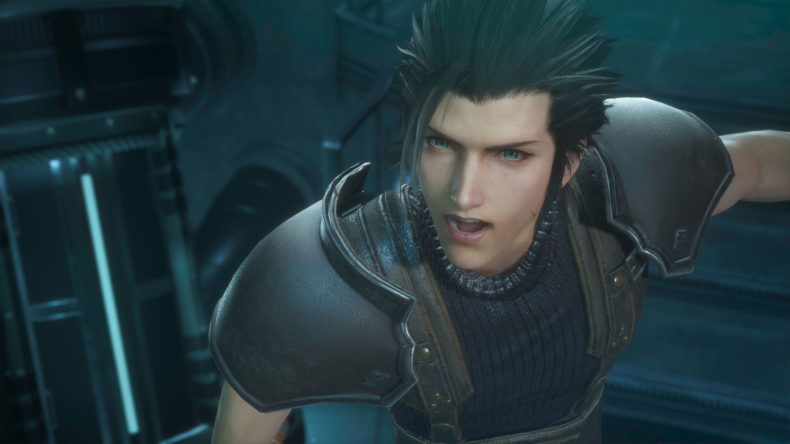 It’s fair to say that there’s a huge number of people who consider Final Fantasy VII the greatest game ever made. Because of that, it’s one of the rare Final Fantasy games with a whole host of spinoffs. If you’ve been hankering for a game featuring Mako, Midgar and Shinra after beating that fabulous remake, then you’ll be happy to get started with Crisis Core -Final Fantasy VII- Reunion.

If you missed Crisis Core the first time around on the PSP, it follows Cloud lookalike Zack Fair and his time in SOLDIER. Set before the events of Final Fantasy VII, it delves into the backstory of Cloud, Shinra and everyone’s favourite silver haired villain. When Sephiroth’s best buds and allies Genesis and Angeal ditch the team their allegiance comes into question, and our hero Zack is quickly promoted to Soldier 1st class and sent on missions to find them. 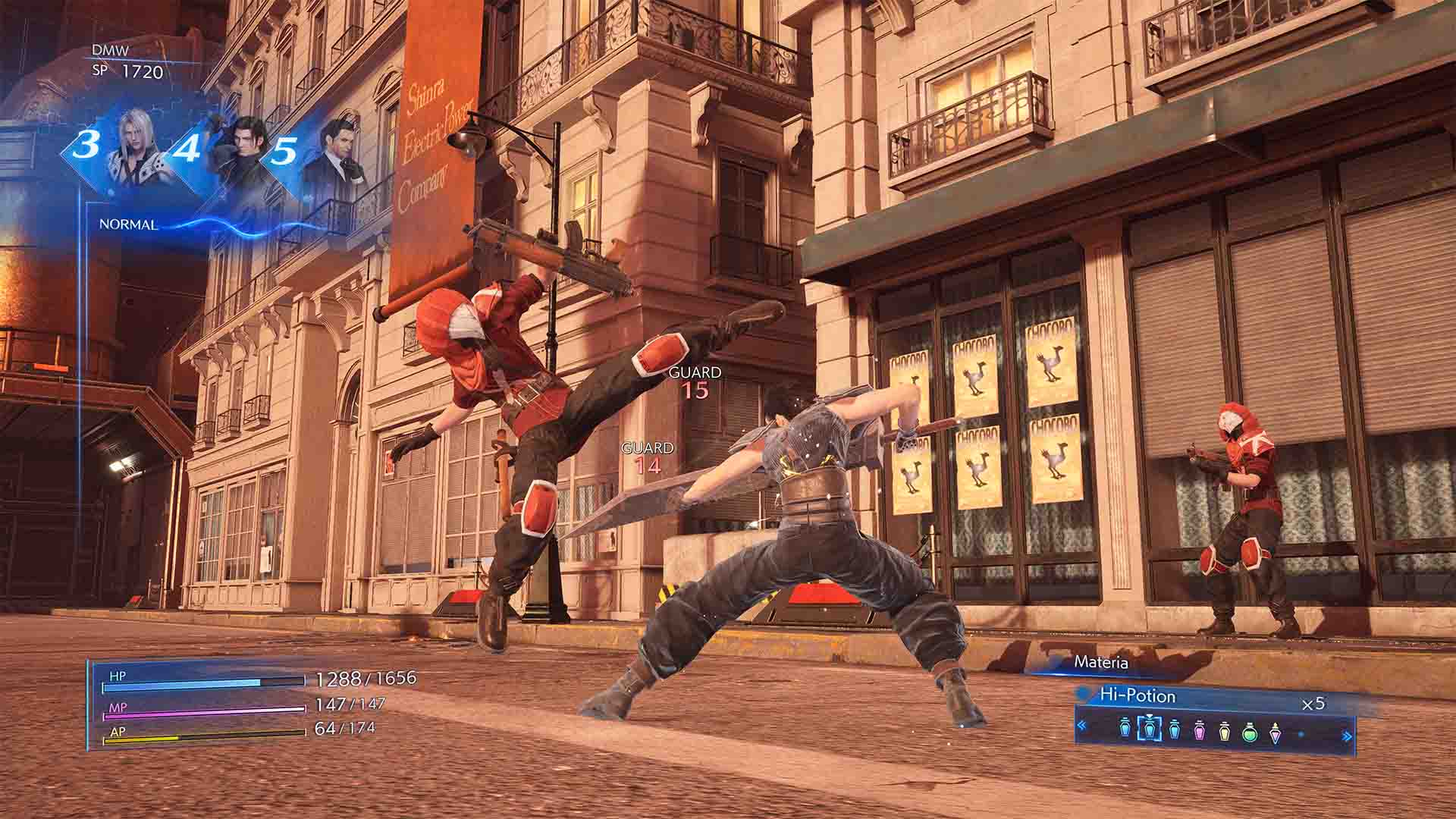 For this preview I was able to play up to the end of chapter 3, which is around five hours of the game. In this time I got to experience plenty of Crisis Core’s battles, story, and updated graphics, and whether you’re a new player or returning fan I can confirm there’s plenty to enjoy in this revamped package.

The combat is the star of the show here, with fast paced action that especially at the time felt very fresh for a JRPG. Zack can slash, roll, and block with the best of them, while also having access to a host of abilities thanks to the Materia you load him up with. By holding down a shoulder button you can shoot out elemental attacks, perform stylish combos, and heal any wounds you need patching up. It’s not dissimilar to the Kingdom Hearts games, but with one luck based twist.

As you fight off waves of guards, beasts, and bombs a slot machine spins away in the top corner of the screen. This is the known as the DMV (which apparently stands for Digital Mind Wave) and grants you all sorts of bonuses in battle. If the characters shown on the reels match up you’ll be given a powerful limit break themed around one of your allies to unleash on the foes in front of you. Whether it’s Sephiroth’s Octoslash or Ifrit’s Hellfire, these attacks are a joy to watch and end all but the toughest scraps in an instant. 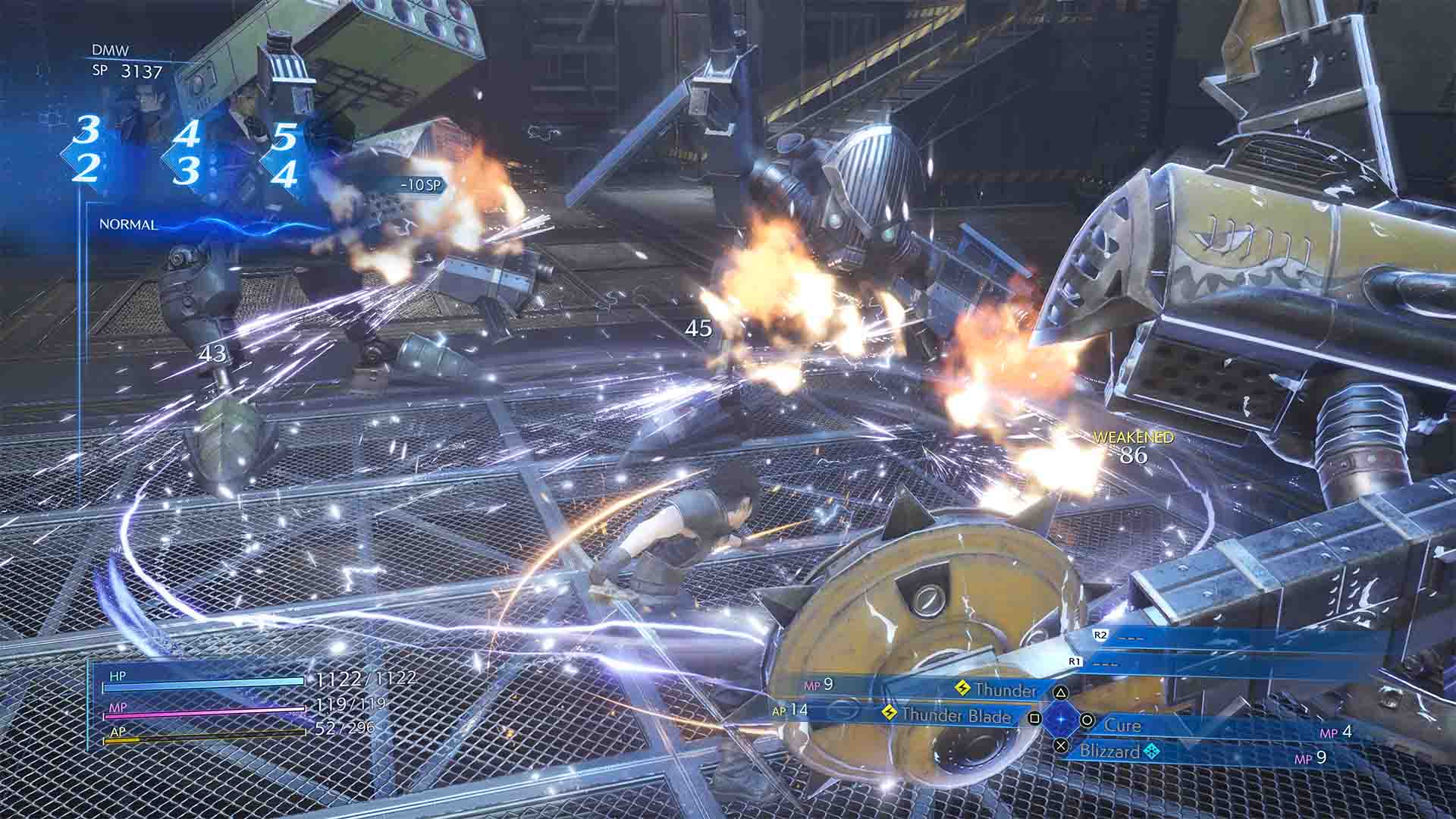 The numbers on the reels are important too. Getting two of the same number will level up the materia you have equipped in that numbered slot, whereas getting any sevens will grant you huge buffs like immunity to physical attacks or unlimited MP for a short time. The best result though is 777, which actually levels Zack up. With so much importance placed on the DMV slots, a bit of luck will get you far into Zack’s wacky adventure searching for his colleagues.

You won’t actually be spending much time searching for your missing superiors though, because the structure of Crisis Core -Final Fantasy VII- Reunion is much more about accomplishing smaller side quests. There are pages and pages of these missions, that drop you into a selection of settings and expect you to find and beat up a specific enemy (with a few random battles on the way). This structure was obviously created with Sony’s first portable console in mind, because they are handily bitesize. When settling in for a few hours of gaming on a home console though it’s a bit of a jarring setup, and honestly gets a little repetitive. The gear and materia you get for beating them is at least helpful though, and will help get you ready for the real missions. 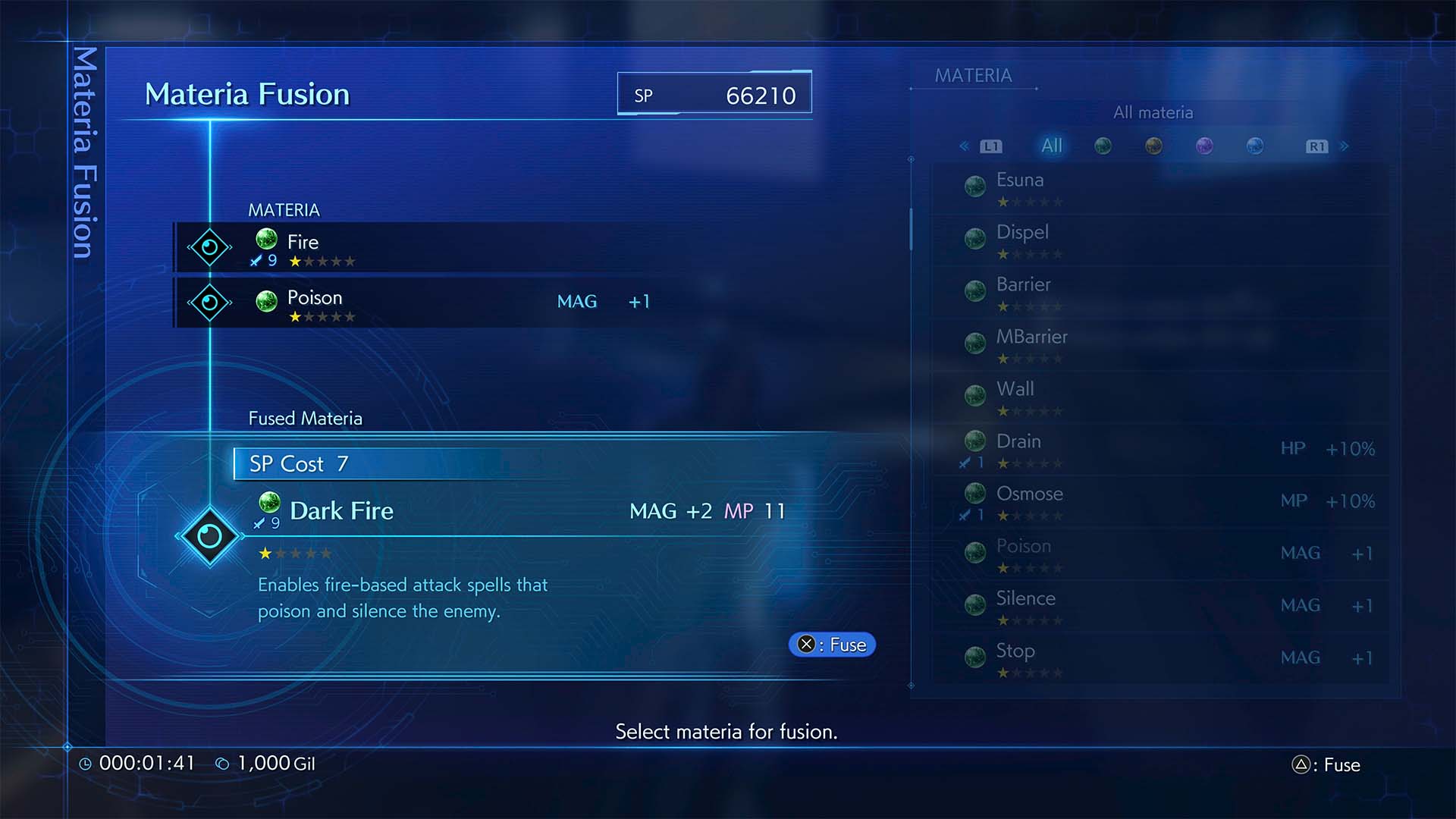 As well as equipping Materia, you’ll also need to fuse them together if you want to improve your loadout. Combining Materia at random will give you access to new helpful skills, but by paying attention to the stat buffs they provide and maxing their level before fusion you’ll get some really impressive results. After a few fuses I was able to switch out my basic Fire and Blizzard attacks for impressive new spells like Dark Blizzara which dealt extra damage and poisoned and silenced any enemies in my path. It’s a really satisfying system to play around with, and I’m looking forward to seeing what options I’ll have at my disposal in later chapters.

You’ll be aware of most of these mechanics already though if you played the game on the PSP, and you probably want to hear more about the upgrades this remake has to offer. Well firstly the visuals are hugely improved. Some aspects like the environments and summon animations aren’t too far off the level of quality seen in Final Fantasy VII Remake, although admittedly not every aspect of Crisis Core visuals has received the same level of polish. Some minor NPCs especially look downright awful, which was kind of expected but still disappointing. 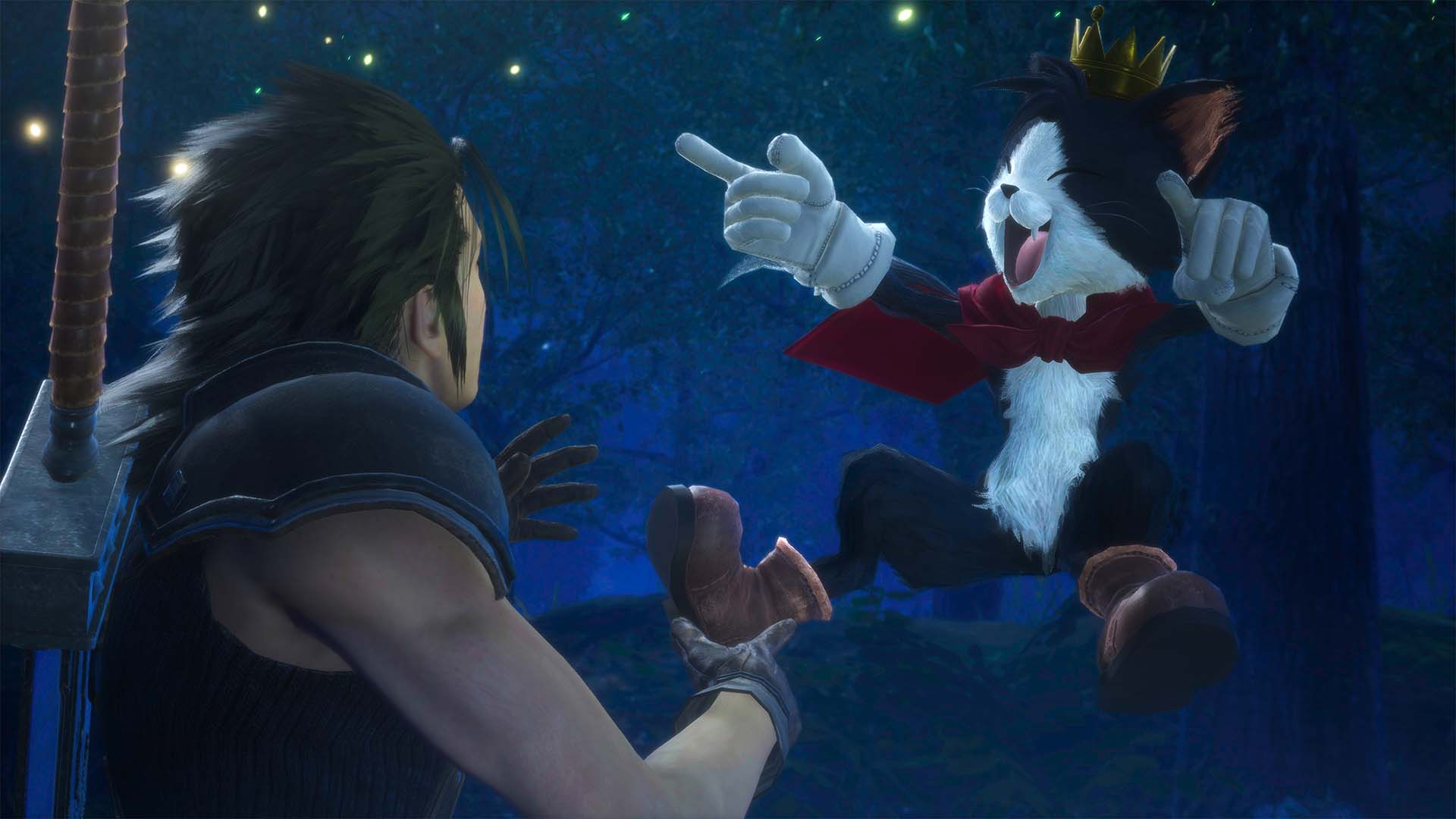 The fantastic audio has been updated too, and has plenty of familiar tunes for fans of the series. A large amount of the voice acting has also been re-recorded too, to ensure the voice actors are the same as in FFVII Remake. It’s a nice touch, and really makes the game feel like it belongs alongside the modern title.

Crisis Core -Final Fantasy VII- Reunion is an action packed spinoff that has me positively gripped at the five hour mark. The combat is fun and fast paced, and the DMV adds an exciting sprinkle of luck to the slashing. If you missed out on this extra chunk of Final Fantasy VII content back on the PSP, then this is your chance to learn more about the backstory of your favourite characters and their lesser known buddy Zack.