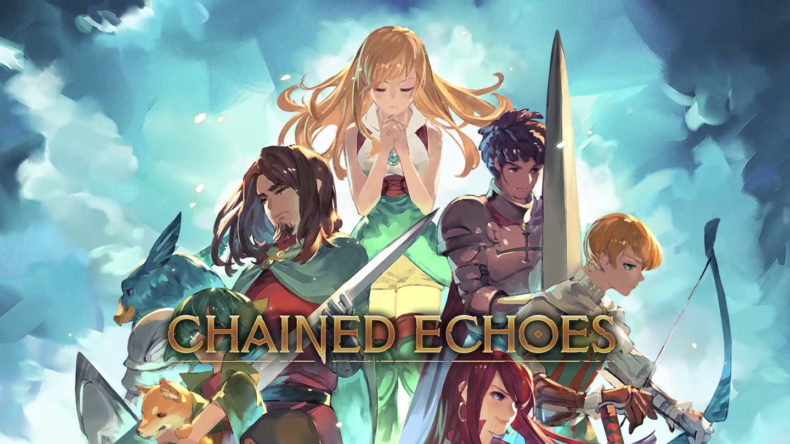 If I had to pick a genre of video game I couldn’t live without, I’d probably have to choose turn-based RPGs. From Pokémon to Persona, these games have just been too big a part of my life to toss aside. It’s not just the classics I’d miss though, this year some of my favourite games have had turn-based combat. Jack Move is the perfect JRPG for those who didn’t have thirty hours to spare, Atelier Sophie 2 is the best game in a series well over twenty years old, and The Legend of Heroes: Trails from Zero finally brought a game to western audiences that was absolutely worth waiting for. It’s been a fantastic year for people who love a good RPG, which makes it all the more impressive that Chained Echoes is far and away the best of the bunch.

On the continent of Valandis, a peaceful life is all but unheard of. The three kingdoms that occupy this fantasy world have been battling for supremacy for so long that most people live their whole lives in these times of conflict. When a mysterious magical explosion kills thousands all at once during a crucial battle, the kingdoms finally take a break from fighting and an age of peace begins. With rulers and generals who are still desperate to wipe out their long term enemies though, it’s hard to imagine the peace lasting long. 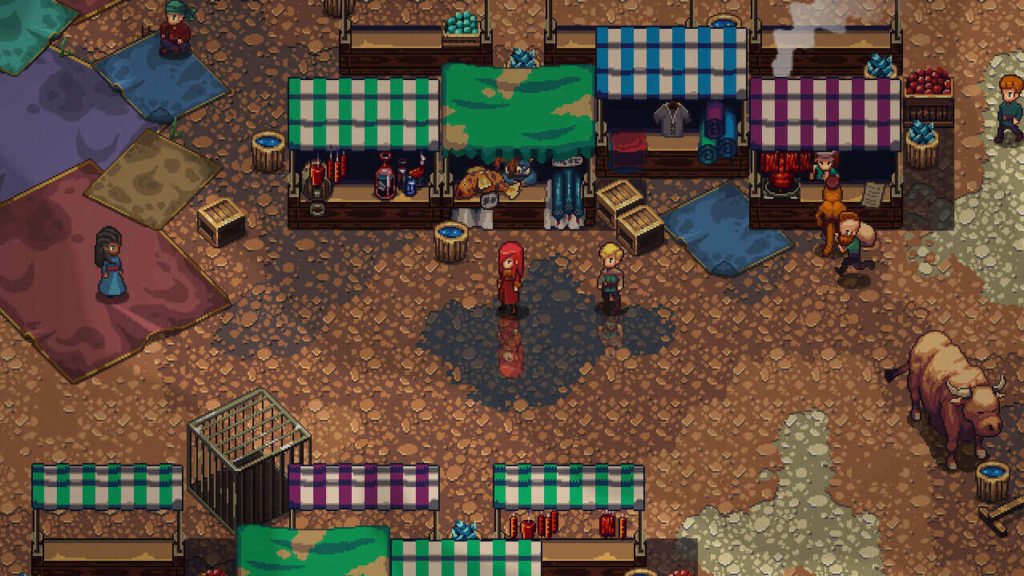 Our main character Glenn is a mercenary, happy to fight for whichever kingdom that will have him with his band of buddies and hulking mech suit. At least that was the case until the day of the explosion. You see it was actually Glenn who accidentally caused this devastating disaster, thanks to a mysterious crystal that it turns out is a weapon of mass destruction. The guilt of killing his friends alongside thousands of others is clearly taking its toll on Glenn, so he decides he needs to dedicate his life to finding and getting rid of the crystal once and for all.

The story of Chained Echoes is frankly incredible, with believable characters, heart wrenching moments and relationships that are built throughout the epic adventure. Alongside Glenn you have a host of interesting allies like Lenne, a princess to one of the kingdoms who ditched the castle to see the world and is horrified by her brother’s lust for war. There’s also master thief Sierra who joins the gang to avoid capture from some baddies who she owes some cash, and ends up deciding that this cause is more important than a life of crime. Every single one of them has their own unique charm, and even the enemies you have to strike down have interesting backstories.

Those enemies need striking down though, and that turn-based combat you know and love is the only way to do it. As you’d expect the four members of your team get to take turns swinging their weapons or using their skills on the enemy, but even from your first encounter the different abilities you can use make things interesting. Some characters have attacks that hit multiple enemies, others take advantage of the elements or apply hugely impactful buffs and nerfs. Each member of the team has a totally unique moveset that can be expanded and upgraded throughout the game, and because between every battle your health and tech points are restored you’re incentivised to go all out every time. 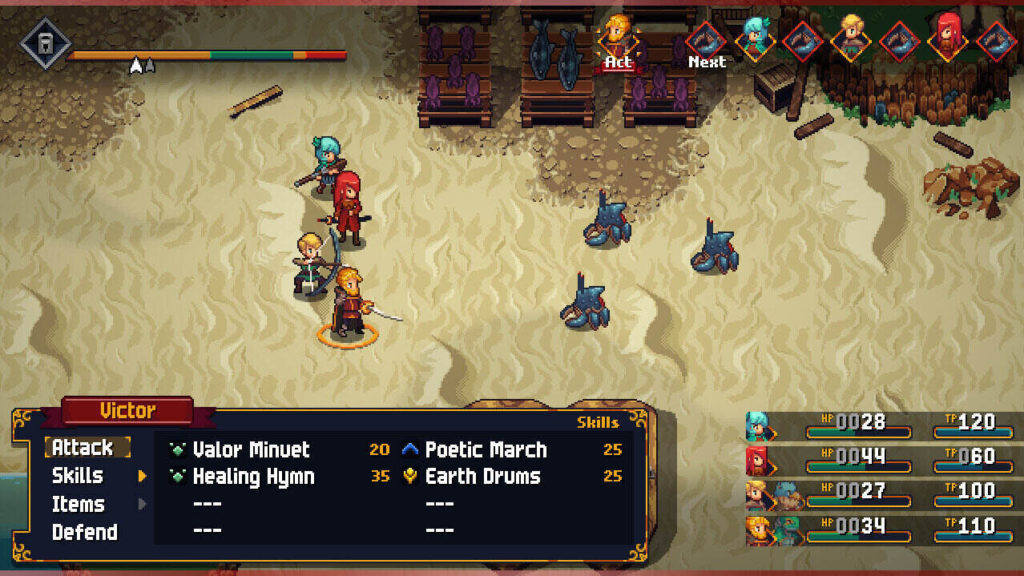 The most interesting aspect of combat though is the Overdrive meter. This is displayed at the top of the screen at all times and when you use an ability builds up. You want the meter to reach the green section in the middle because you’ll deal way more damage and all your abilities will cost half the tech points, but if you keep raising it past that it’ll go into the red and your party will take more damage and deal a pitiful amount back. To push the meter back down there are a few options at your disposal. You can defend, tag in one of your party members that’s sitting this one out, or use an ability highlighted in yellow to push the meter in the opposite direction. Managing the Overdrive Meter adds an extra layer of complexity to the combat, and means you’re not just using the same powerful abilities over and over again.

Between fights you’ll have plenty of opportunity to level up your party by using grimoire shards. Instead of gaining experience in battle, you’re given these shards that provide your characters with a skill point and stat boosts at set points throughout the game (usually after boss fights). There are also Class Seals you can equip to raise certain stats and gain new abilities, and an in-depth weapon forging system that you can use to make your swords stronger by putting fuseable crystals in them. There’s no shortage of ways to make the team stronger, and before long you’ll be taking on enemy soldiers and wild wolves with ease.

No matter how much you level up, you won’t be as powerful as a mech suit makes you. It takes many many hours to finally get access to your mech suits, and when you do combat is shaken up yet again. Firstly all the numbers are bigger (dealing thousands of damage at a time after thinking hitting for eighty is reasonable) but the Overdrive meter works differently too. To keep in the green this time you need to switch gears, because doing so makes all your abilities push the meter in a different direction. Shifting gears also means you’ll take and deal different amounts of damage, so there’s a lot to think about in this different style of combat. It sounds complex, but they introduce mech combat at the perfect moment when you’re starting to feel like you’ve mastered everything. 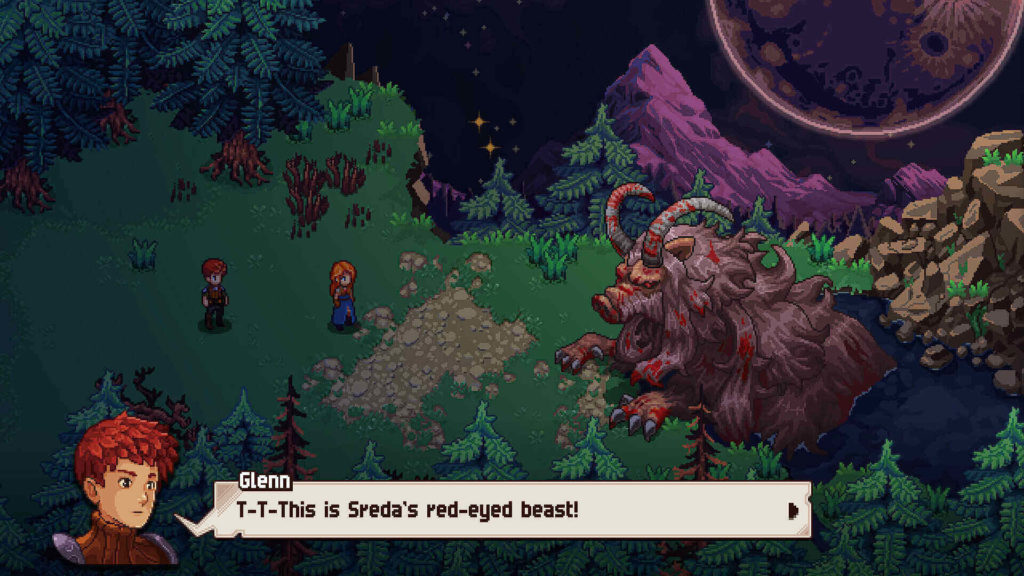 When you aren’t spending every moment of Chained Echoes killing everything that crosses your path, you’ll probably be exploring the vast environments. Each new area you reach feels really open, and is full of nooks and crannies to explore. You’re rewarded for doing so as well, thanks to the reward board that gives you handy items and even levels up for completing various goals. Finding all the chests in an area, beating up powerful optional boss monsters and digging up treasure in the ground where arrows meet will all net you rewards, and really incentivise exploring the gorgeous locales.

You can probably tell that I’m a bit in love with Chained Echoes, but it just does everything right. The pace of the game is extraordinary, with no random encounters to worry about, a movement speed on the overworld that feels perfect and fast travel if you want to go back to old places. Even combat is lightning fast, with no lengthy animations to worry about and no need to worry about going into a menu to heal between fights. Developer Mattias Linda even thought to fill your Ultra Attack meter before every boss fight, so you don’t have to worry about saving that up or beating up weaklings to fill it if you think a big bad is lurking around the next corner.

There are plenty of other clever ideas packed into Chained Echoes too, it would just take too long to list them all in a punchy review. There’s a section featuring mine cart combat where you have to fight enemies while making sure you don’t crash by spending some turns hitting a control panel. Every boss fight is unique too, and requires a bit of experimentation to find the best strategy. 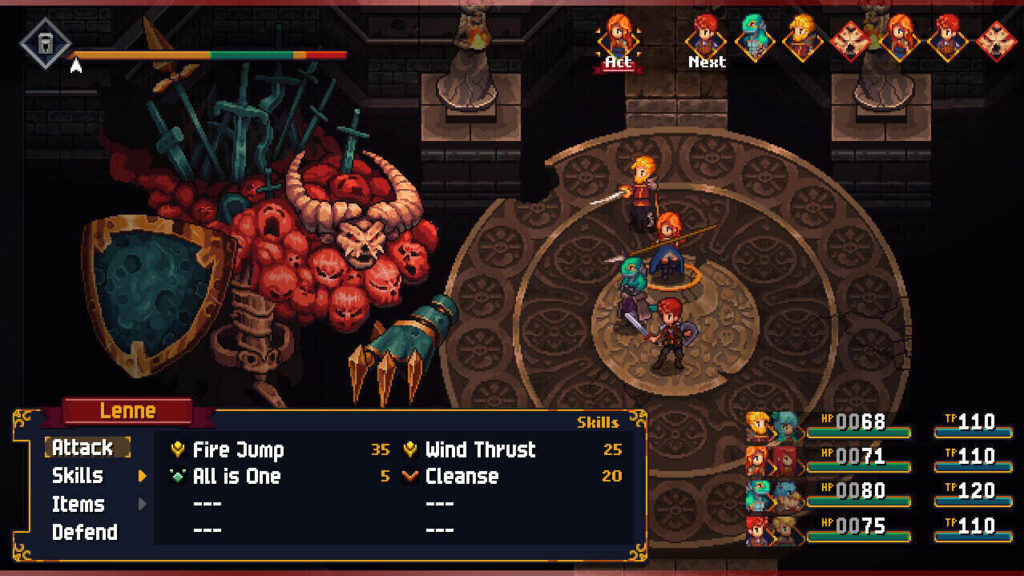 I should also give a special shout-out to the visuals and the music. The game looks fantastic, with beautiful environments, and charming characters. The audio is something else entirely, with a soundtrack that would be at home nestled among classics like Chrono Trigger and Final Fantasy IX. Matthias Linda clearly put a whole lot of love into this game, and in doing so ensured pretty much every aspect of it is as close to perfect as it could possibly be.

Chained Echoes is simply the best RPG I’ve played in a very very long time. It has a story that manages to feel both grounded and fantastical, combat that constantly evolves and never feels sluggish, and environments that beg to be explored. It’s a game that feels like it was made alongside the SNES RPGs that fill many a “greatest of all time” list, but refines the mechanics those games implemented to create a game that’s infinitely better than them. Chained Echoes is the pinnacle of its genre, and a game you have to make time for as soon as possible.

Sometimes your next objective isn't 100% clear

Chained Echoes is without a doubt the best RPG I've played all year, and should be pushed to the top of your backlog immediately.