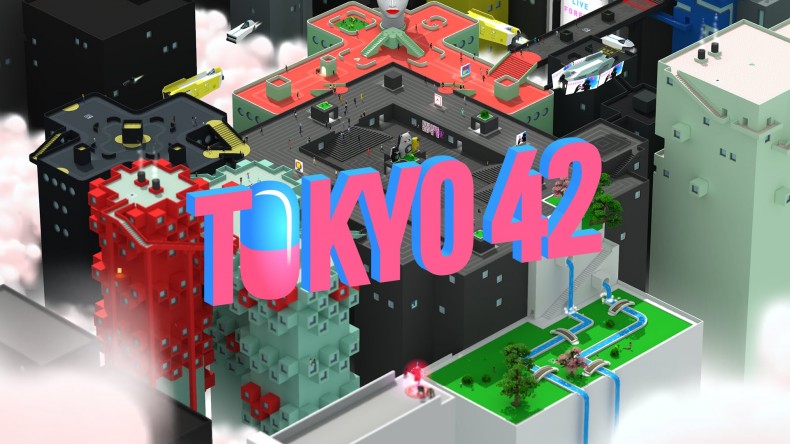 It took mere seconds for me to get sucked into Tokyo 42, and it happened when I stepped foot outside my apartment block. There, lying in front of me, was a neo-futuristic vision of Tokyo that reminded me of Blade Runner, and I couldn’t be happier. From the off, you’re evading gunfire and forced to jump off the side of a building after being framed for a murder you didn’t commit. It’s a promising start, but as time goes on, you begin to get frustrated with some of the gun mechanics, and grow tiresome of the lacklustre story. It sure is pretty, though.

SMAC has crafted such a gorgeous city, and thanks to its isometric view and the ability to turn the camera 90 degrees at will, you can see every angle of it. Big buildings coloured boldly in red, black, yellow, and white, with a wide range of architecture and bright green gardens, neon billboards, large statues, and vibrant and diverse décor. There are many buildings and locations, with many tiered, and stairs separating them, however, you can pretty much go anywhere within its boundaries. This ends up being extremely useful when you’re looking for a vantage point to take out your next target. See, you’re an assassin. An assassin with lots of guns, and a silky smooth Katana to use in stealthy situations. You get to play dress up with different disguises (including one that looks like Agent 47) and find your own way to take out different targets, however, there are certain missions that require you to take a seldom route into a location, so you can’t be as creative as you like on every hit.

Some missions within the single player campaign take as little as a minute, and others up to 10 or 15 minutes. You may have to assassinate someone who’s 100 yards away, or infiltrate a heavily guarded stronghold that have very few save points. It starts off rather easy, but around mission 13, the difficulty ramps up, becoming tedious when it should be fun. This falls to the aiming, as it’s hard to try and kill someone on a different level to you, and also because it’s not always clear where you’re shooting. For example, there’s a hideout where a swarm of these punks are, and they come at you from lots of different angles. They have snipers trying to kill you, and ground soldiers gunning at you; it’s fast-paced and aiming at all of them isn’t easy, meaning the stealth option should’ve been the way forward. Thing is, this is much harder than it should be as well. Guard’s intelligence gets better as you progress, and by this point, they become alert much faster, and bullets fly from 0 – 60 within seconds. There is a great difficulty spike, and it shouldn’t be this sharp.

You use the right analogue stick to aim and the right trigger to shoot, and it feels very much like the aiming in Hotline Miami, but you were only ever shooting from one level. Basically, if you want to kill a lot of enemies, make sure you’re stood on the same level as it’s not always easy to judge your target’s distance. Despite these flaws, the combat isn’t all bad. Using the explosives and the sniper rifle is a lot of fun, and once you’ve purchased one of the better guns from a gunship, you’re going to be pleased you spent all that money. Through your missions you’ll earn money to buy new stuff, including coats (there’s even one called a Deckard), and cats (I don’t know either!),and there’re plenty of collectables throughout Tokyo to keep you playing outside of the main and side missions. It’s quite a big city, so there are plenty of fast travel points to make it easier to reach your next objective, but I often found walking (or running) around the map quite pleasant – did I say it looked gorgeous?

There’s a lot to like about Tokyo 42, but the story runs out of juice, and the weapon mechanics end up being finicky to use and even harder to master. It has a stunning soundtrack, and it never gets tiring, mainly because it reminds me of running around in Hotline Miami, with smooth synth beats and chilled out vibes. I’d certainly suggest playing, but don’t be surprised if it begins to feel a tad dull and frustrating as you reach halfway. Some of the later levels are tough, and with the controls being as they are, it’s far harder than it needs to be.

Visuals are great
Music is a real treat
Lots of collectables

Whilst some of the gun mechanics don't work as well as they should, there's still lots of missions, customisation, and a cracking electronic soundtrack in the vein of Hotline Miami.