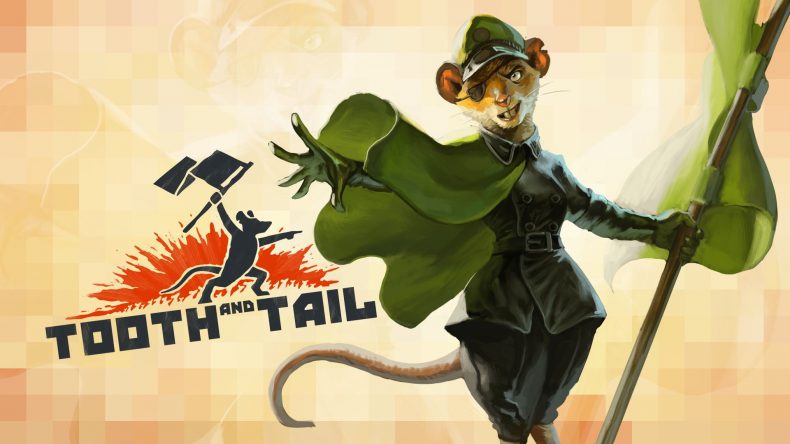 The strategy genre isn’t the easiest thing to get into these days. Innovation within the genre is quite rare, not because of poor development but instead because changing too much tends to result in the creation of entirely new genres. Tower defence games pretty much proved that point, early on. This hasn’t stopped Pocketwatch Games, creator of Monaco: What’s Yours Is Mine, from making a go of it with new title Tooth and Tail.

Set in a Soviet-styled world of war and revolution, Tooth and Tail tells the story of the Longcoats, KSR, the Commonfolk and the Civilised; all factions in a civil war for the right to eat. The catch? Well, they’re all animals, and the right to eat means the losers go on the menu. The revolution began when Archimedes, leader of the Civilised, took the son of Bellafide, feeding his rodent youngster to the masses. You can see why Bellafide was a bit angry. Strangely, the pigs of the world were the only ones not to eat meat, instead ending up as workers (well, slaves really) for the various factions’ farms. These pigs are your last defence should things go awry. As an RTS, the controls aren’t as you might expect. You’d be forgiven for thinking you’d use a mouse (or cursor on console) and select your various units, keeping things moving around the map and dealing with any conflict using battalions of soldiers you’ve placed around each area. You might be surprised to learn that you don’t really control anyone other than the commander, directly moving him (or her) around with the controller’s left stick, or with WASD on keyboard. You’ll move around and manually select building plots or bring in outside help by paying mercenary units that may be on the map, while holding X on an Xbox controller would see your current main character burrow their way back to the home farm, in order to deal with any immediate threats to the main base.

Combat controls seem quite simple at the start: rally a selected unit type by pressing the left trigger or rally all units to you with the right trigger. The right stick or the left/right bumpers switch between units types to build or rally, and any actual attacks are dependent on the fog of war being lifted. Your character widens the range of units by lifting the fog of war by a much greater degree, so leaving turrets to guard your base won’t always work if you’re not around. Their range will be greatly reduced, leaving them open to longer ranged barrages or, in the case of one early mission with a bit of a difficulty spike: snakes.

That particular difficulty spike was very frustrating originally, as the game had barely begun and I was still learning how to play properly. In a single mission I was introduced to the reduced visibility feature, due to sandstorms (making any defences useless without me there to widen the sight range), and the aforementioned snakes would simply decimate anything in their path. In a mission that already began with limited resources, and even after I had recruited a fellow revolter, I was overwhelmed in minutes. Luckily, Pocketwatch did take note of these difficulty spikes and fixed them quickly via a patch. The result is a much more friendly experience, matching the more casual game for which the developer was aiming. To help you succeed more easily, you should try to learn how each unit operates. You can only do through trial and error, really, but with the fairer difficulty this is easier to achieve. The sheer variety of these units is great, with flamethrower-wielding boars and chameleons that can turn invisible; falcons that swoop by with their machine guns ripping through squirrels and other smaller creatures; foxes that deal huge amounts of damage with their sniper rifles, but cannot attack structures; and then there are the owls, unable to attack but they spawn mice that quickly attack anything before their limited lifespan expires. Upon death, the owl explodes into a shower of these mice too. Learning the strengths and weaknesses of each unit, and when/where to deploy them, is key to success in Tooth and Tail.

This is where the controls become a little awkward. Sure, you can rally individual unit types to you with LT, but that means every single one of that type will move to you, which could leave important areas unguarded. Scrolling through unit types isn’t exactly quick either, especially if you’re in a panic due to an overwhelming scenario like the one with the snakes. The one thing you need in a strategy game is quick reactions, which in turn requires intuitive and swift controls; neither of which can truly be said about Tooth and Tail. It’s a shame, because there is a lot of potential here. The animal civil war and the class system within it, offers a lot of dark humour and the interplay between the commanders and their comrades in the hubs between missions is great; but they sometimes feel a little out of place in this particular brand of game. This isn’t to say that Tooth and Tail isn’t fun to play; its (mostly) casual, almost mobile-like gameplay structure means that missions usually only last five minutes or so. This kind of quick turnaround makes it perfect for bashing out a quick mission during a break at home, perhaps two if you’re good, which certainly makes a change from all the hundred-hour epics out there today.

Tooth and Tail is a good game, then. Its humour and quick mission times make it an interesting prospect in a genre filled with far-too-serious stories and long, drawn-out missions; but the constantly babysitting your units drags it back from being anything truly special. What it does do however, is bring a new, faster-paced approach to the RTS genre.

Its humour and quick mission times make it an interesting prospect in a genre filled with far-too-serious stories and long, drawn-out missions; but the constantly babysitting your units drags it back from being anything truly special.