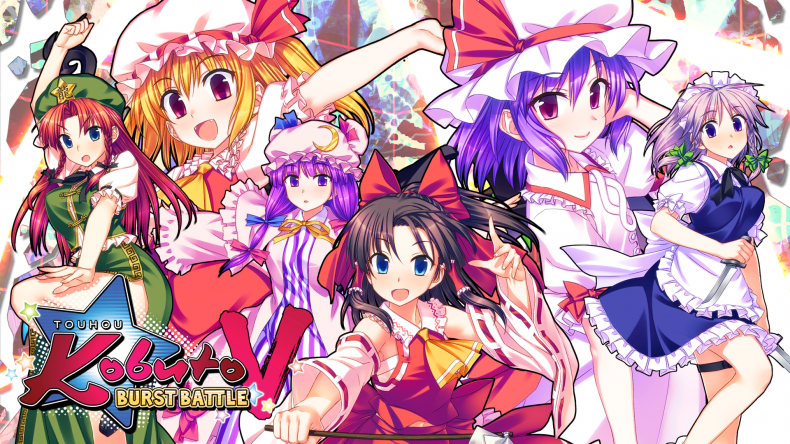 It has been a while since Touhou Genso Rondo Bullet Ballet released on PS4. That was the first Touhou game to get localized and it turned out decent. I ended up enjoying Genso Wanderer quite a bit and was looking forward to the next Touhou localization from NIS America. Today Touhou Kobuto V: Burst Battle has released on not just PS4 and PS Vita but also Nintendo Switch. I was excited to see how the Switch version would play given the nature of this game.

Touhou Kobuto V: Burst Battle’s base game was actually released before Genso Rondo. Kobuto V is an arena fighter that plays like a combination of Virtual On and a bullet hell lite experience. There’s a story mode which is just some padded dialogue through nicely drawn backgrounds that always lead to battles. The story mode is probably the best showcase of the character art. I would’ve preferred just a visual novel like mode here without forced battles or a story that feels throw away. You will be spending the most time in the Arcade or Score Attack modes. A day one patch adds online functionality. If you play without this patch, the Vs Online mode will just allow you to setup ad-hoc rooms. There’s a separate local wireless mode as well. There’s a split screen mode where you can play versus a friend using a single Joy-Con each which is always welcome on the Switch. The big problem is how boring the gameplay gets. I mentioned Virtual On and you are mostly locked on to your enemy here as you move and focus on the various attacks. Getting up close will allow for a mêlée attack. I got bored after a few games with each character. I get that this won’t be a high budget experience like ARMS, but it still isn’t great for content at all.

I’d recommend looking at the Manual which is a menu option on the bottom right to check out the various moves you can execute here because there are loads of things not explained to you during gameplay. In my testing, I haven’t been able to get a single game on either PS4 or Switch. As of this writing, it hasn’t released in Europe yet, but it is available everywhere else. There are less than 10 fighters and literally 2 decent looking stages. The remaining few stages harken back to the PS1 era environments. While the character art is good, their character models in game aren’t great. The visual flair for the bullet hell like attacks also look poor. Aside from the story mode character portraits and two of the stages, this release looks plain bad. Performance is mostly solid with a frame drop only on one particular stage that was noticeably bad when you jump and are floating down. The soundtrack is pretty good and Japanese voice acting complementing the gameplay.

If you want a good local arena fighting game and can’t be bothered to get ARMS or any of the SNK classics, this maybe for you. It has too many issues for me to recommend it. I’m glad that NIS America is continuing to not just localize Touhou games in the West but also port things to the Switch. This Touhou game is definitely not what people should play when there are far better ones available elsewhere. Genso Wanderer would have been a much better first impression for newcomers to Touhou games on Nintendo Switch.

Character art is nice
Local splitscreen with Joy-Cons is nice

Touhou Kobuto V: Burst Battle is the worst Touhou game I’ve played and one that you should avoid unless you absolutely must own everything Touhou.